After leaving the open expanses of Deopham Green and the roar of Snetterton, we head to a very remote and quiet airfield. Quiet and remote for a very special reason. From here crews would experience top-secret flights, we would see a link to one of America’s greatest and most powerful families and the RAF would strike another blow at the heart of the Gestapo. We head to RAF Fersfield. 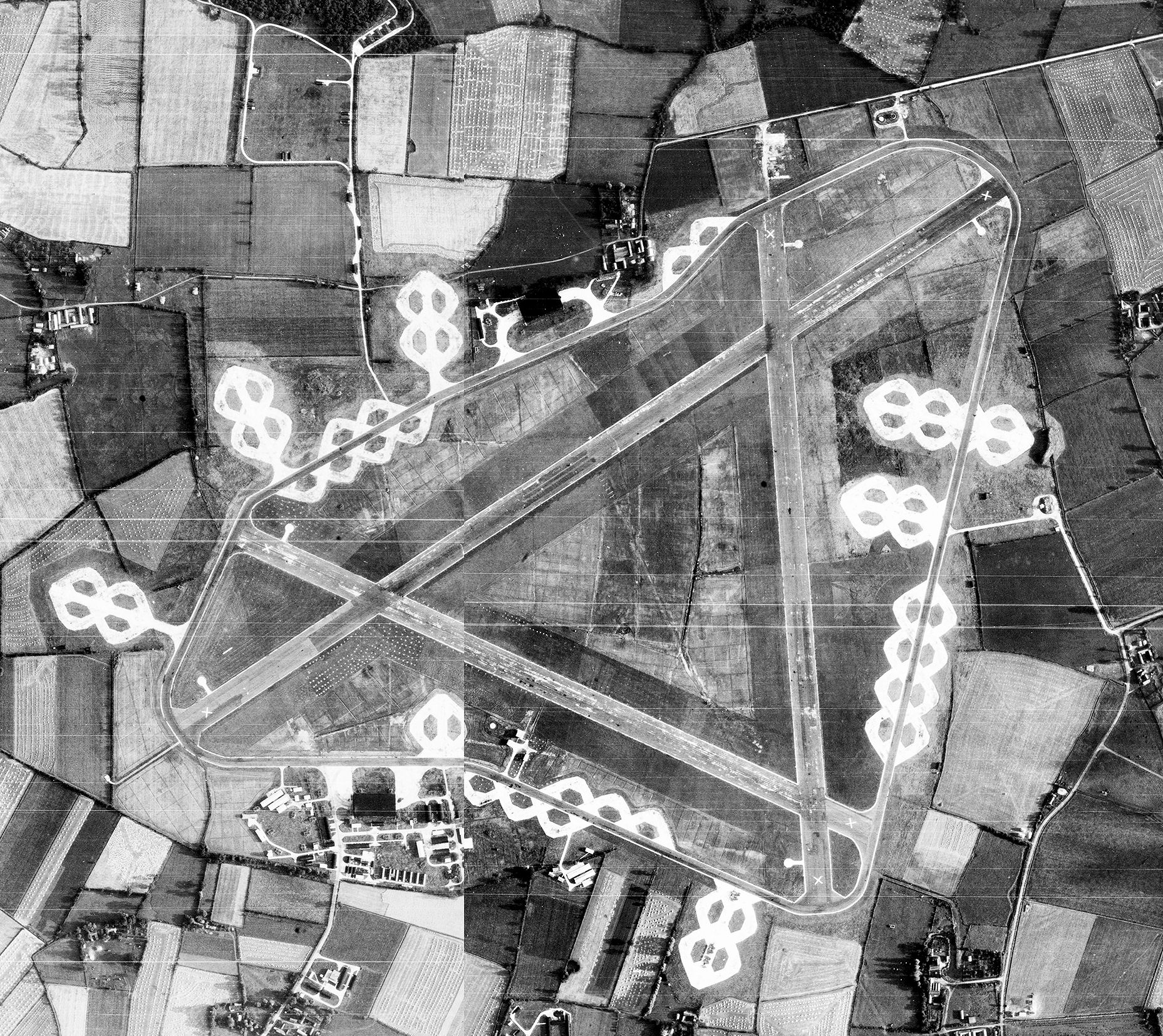 Originally built as a satellite for RAF Knettishall, RAF Fersfield, was built-in late 1943. The third Class A airfield on this Trail, its main runway ran along a NE-SW direction, was 2000 yds in length and was constructed of concrete. There was a second and third runway of 1,400 yds running N-S and E-W again of concrete. Fersfield had two T-2 Hangars, one to the north side and one to the south, and 50 loop dispersals for aircraft storage. The bomb dump was located to the north, the technical area to the south and the accommodation blocks to the south and south-west. Fersfield would eventually be able to accommodate up to 2000 mixed personnel.

Initially, the airfield was called Winfarthing and designated station 140, it was then handed over  to the USAAF who would rename it Fersfield Station 554 (I am at present unable to locate a precise date for this transfer).

Fersfield was specifically chosen for its remote location as, unknown to those who came here, it was going to play a major role in the battle over Europe.

The first residents were a detachment of the 388th Bomb Group (BG) based at Knettishall which consisted of four bomb squadrons: the 560th 561st, 562nd and 563rd. A detachment specifically from the 562nd, were brought here to perform special operations and research into radio controlled bombs using war-weary B-17s and B-24s.

An original T2 Hangar now stores grain rather than B17s.

Operating as Operation ‘Aphrodite’, the idea was to remove all operational equipment from the aircraft, fill it with around 20,000 lb of ‘Torpex’ and fly it by remote control into a specified target such as ‘V’ weapon sites, submarine pen (Operations Crossbow and Noball) or similar hight prestige targets that were otherwise difficult to destroy .

Both the USAAF and USN were carrying out these trials. The Navy, also using Fersfield, called their operations ‘Anvil’ and used the PB4Y (the Navy version of the B-24 ‘Liberator’) as their drone.

The first Aphrodite mission took place on August 4th 1944, and was to set the tone for all future operations. Mission 515, was flown using four B-17 ‘babies’ with four accompanying ‘mothers’ to target ‘V’  weapon sites at : Mimoyecques, Siracourt, Watten, and Wizernes. Escorting them were sixteen P-47s and sixteen P-51s. One of the babies, B-17 (42-39835) ‘Wantta Spa(r)‘ (TU-N), had completed 16 missions between November 18th 1943 and July 6th 1944 with the 351st at Polebrook and was declared to be “war-weary”. It took off and very soon  the crew, Lt J. Fisher and T/Sgt E. Most, realised there was a problem with the altimeter causing it to climb too quickly. Whilst T/Sgt Most bailed out, Lt. Fisher struggled on with the controls until it finally crashed in an almighty fireball in woodlands at Sudbourne, Suffolk creating a crater 100ft wide. The three remaining ‘babies’ carried on but all failed to hit their designated targets. One Mother lost control and the baby hit a Gun Battery at Gravelines, the second overshot and the third B-17F formally (41-24639) “The Careful Virgin”  ‘OR-W’ of the 91st BG (323rd BS), hit short due to controller error.

B-17F “The Careful Virgin” before modification and whilst in the hands of the 91st BG. (USAF Photo)

Similar results were to follow in another mission only two days later, and then in further operations throughout both the Aphrodite and Anvil projects.

The most famous tragedy of these missions was that of Lieutenant Joseph P Kennedy Jnr, who was killed when his PB4Y unexpectedly blew up over Suffolk killing both him and his co-pilot on 12th August 1944.*2 In all there were 25 drone missions completed but none successfully hit their designated target with either control or accuracy. The missions were all considered failures and the operations were all cancelled soon after.

Another secret operation taking place from Fersfield, also involved radio controlled bombs. Designated Operation ‘Batty’ it involved GB-4 television controlled bombs being  slung underneath B-17s and guided onto targets using TV. The 563rd BS provided much of the support whilst the others in the 388th BG the crews. In the later part of 1944 a small number of these operations were flown again with little success and this too was abandoned before it could have any significant effect on the war.

All in all, the operations carried out here, were disastrous, killing as many crews and causing as much damage to the UK as it did the enemy. However, it did mean that the Allies had entered into the drone war and set the scene for future military operations.

The Americans left Fersfield late in 1944, and it was handed back to the RAF. A number of units used it for short periods primarily for aircrew training. However, Fersfield was to have one last remarkable mission and a further claim to fame.

On March 21st 1945, Mosquito VI units of 21 Sqn (RAF), 464 Sqn (RAAF) and 487 Sqn (RNZAF) all part of 140 Wing, were pulled back from the continent for a special mission to attack the Gestapo Headquarters at Copenhagen. Primarily based at Hunsdon (Trail 25), the mission was Led by Gp. Capt R Bateson and Sqn Ldr E Sismore, who took off in Mosquito RS570 ‘X’ at 08:35 and led a group of Mosquitoes in three waves of 6 aircraft in Operation Carthage.

The Shellhaus building raid gained notoriety for two reasons. Firstly, a large part of the building was bombed and destroyed and important documents set alight thus achieving the overall objective of the mission. A low-level daring raid it was operationally a great success. However, Mosquitos following the initial wave attacked what they believed to be the building but what was in fact a school masked by fire and smoke. This caused a significant number of casualties including children.

Six aircraft failed to return from the mission, four Mosquitos (one of which crashed causing the smoke and fire that masked the school) and Two P-51s that were part of a 28 strong fighter escort.

This operation was one of many daring low-level raids that the wing carried out, attacking various buildings including  the Amiens prison.

The wing left Fersfield which signified the end of overseas operations and Fersfield would become a staging post for units prior to disbandment. Between November 1944 and September 1945 a number of units would be located here  which included 98, 107 (one week), 140 (four days), 180 (one week), 226, 605 and 613 Sqns. Operating a number of aircraft types including: Mosquitos (T.III), Bostons (IIa), Hurricanes (IV), Martinets (TT.III), Mitchells (III) and Anson Is, Fersfield had now had its day. In the following month, December 1945, the site was closed and the land sold off. Fersfield had closed its door for the last time and history had been written.

Post war, Fersfield had a brief spell of motor racing on its tracks and runways, but unlike Snetterton or Podington it wouldn’t last and in 1951 Fersfield became agricultural once more, with many of the buildings being demolished and the remainder left to rot or, some thankfully, used for storage.

A few buildings remain on the technical Site.

Today a few buildings still do remain clinging onto life. The T-2 on the south side stores grain, and a number of Nissen huts  that housed the technical aspects of the airfield, are now storage for farm machinery and other associated equipment. All these can be located at the end of a small road from the village and when visiting, I found the workers here only to willing to allow the visitor to wander freely among them. Footpaths cross the southern side of this site and to the north across the field dissecting the airfield. The path is very poorly marked and you are simply wandering across the crops. From here, you can find the last few remains of the accommodation site, further south a short distance away. Latrines and other communal buildings are shrouded in weeds, gradually disappearing beneath the undergrowth. Trees sprout from between the walls where so many walked, before or after a mission. Nissen huts survive further out, now dilapidated and hastily patched, their memories mixed amongst the personal belongings of new owners.

One of the many Latrines on the communal site.

It is hard to believe that an airfield with such an iconic history as Fersfield never made it to the status of so many others. Surprisingly, it was here at this quiet and remote part of Norfolk that aviation history was made and American politics changed forever.

21 thoughts on “RAF Fersfield – Where history was made – and lost.”