Kimbolton station was home to the four Squadrons of the 379th BG, Eighth Air Force flying B-17 ‘Flying Fortresses’, identifiable by a triangle and large ‘K’ on the fin.

The 379th BG took part in many of the war’s greatest air battles carrying out numerous bombing missions over occupied Europe. They also flew, unprotected, into the heartland of Germany, attacking prestige industrial targets, losing many aircraft and aircrew in the process.

As with many squadrons of both the USAAF and RAF, heroic acts of bravery and self-sacrifice were common place, crews putting their own lives in jeopardy to save those of their fellow crewmen and colleagues. Many did not return as a result. This is the story of one such crew, told by Mitch Peeke.

I was recently contacted by a lady via the GoFundMe page linked to the memorial I am raising here at Allhallows, to 2nd Lieutenant Armand Ramacitti and the crew of B-17 #44-6133. The lady’s name is Mary Barton and her Dad was a pilot in the 524th Squadron, 379th Bombardment Group, who were also based at Kimbolton. 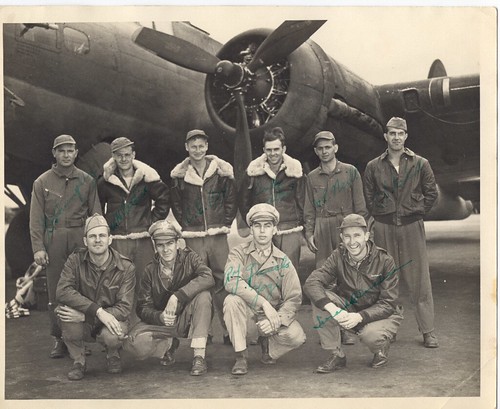 John Morse’s crew were the second crew assigned to that ship, taking over when the first crew completed their tour. She had already been named “The Sweater Girl” by her first crew. As she’d seen her previous crew safely through their tour, John and his crew kept the name. Sadly, the run of luck was not set to continue. On John’s third mission, their Top turret gunner, John Humphreys was fatally wounded when a German fighter attacked the aircraft.

John’s eighth mission was on February 22nd 1944 during “Big Week.” The target was an aircraft factory at Halberstadt. However, near Koln, “Sweater Girl” was seen to take a devastating hit from Flak in the starboard wing. The aircraft dropped out of formation and went down in a spin. No parachutes were seen to emerge and “Sweater Girl” was presumed lost.

The exploding Flak shell had not only severely damaged the aircraft, but it had started a fire in the Cockpit and terribly wounded the Radio Operator, T/Sgt Willard Clothier. The shrapnel had practically severed Clothier’s thigh. The Tail Gunner, Sgt Edward Pate, had also been wounded and now had a large gaping hole in his ankle. However, John Morse was an exceptional pilot, he’d been a flying Instructor for two years previously and was just shy of thirty years old when he’d volunteered for combat duty. He was not about to give up on his ship or his crew. Somehow, John managed to regain control of the aircraft pulling it out of its potentially terminal fall.

The Cockpit fire having now been put out, John and his Co Pilot realised that “Sweater Girl” would never make it back to Kimbolton.  With two critically wounded crewmen aboard, John’s next decision was how best to get his crew and his aircraft safely down. There were really only two options: a traditional wheels-up crash landing, or letting the crew bail out.

By now, they were over the German town of Oberbruch, about six miles short of the Dutch border. It was crunch time. John saw a piece of open ground below, away from the houses, but it wasn’t big enough to accommodate a B-17 coming in wheels-up. Gently banking left, he began circling, giving the “Everybody out!” order to the crew. The Bombardier had already put a tourniquet on the Radio Operator’s thigh and a field dressing on the Tail gunner’s ankle. Both men were now strapped into their parachutes and put out of the aircraft. As the rest of the crew bailed out, John trimmed the stricken B-17 and lashed the control yoke with belts to hold “Sweater Girl” in the shallow spiral dive he’d started, then he too bailed out.

John’s piloting skills had saved his crew. Moreover, as “Sweater Girl” continued to circle, descending unmanned over that open ground, the people on the ground watching the drama unfold had plenty of warning that a crash was inevitable. Witnesses on the ground said that the plane had circled for nearly fifteen minutes before finally and literally flying itself into the ground behind the houses. There was no explosion and nobody was hurt. 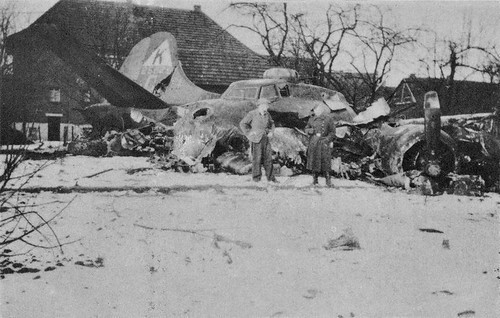 The Tail Gunner, Sgt  Edward Pate, and the Radioman, T/Sgt Willard Clothier, were both repatriated some months later, after treatment in a POW Hospital, Clothier losing his leg. John Morse and the rest of “Sweater Girl”s crew spent the remainder of the war as POW’s. All later returned home.

In 2015, A civic-minded citizen of Oberbruch, Helmut Franken, created a monument to the event bearing the names of all nine crew members, near to the place where the B-17 crashed. He also sent Mary, John Morse’s daughter, the pictures of the wreck, which were taken the day after the crash. Oberbruch has never forgotten how John Morse’s actions that day not only saved the lives of his crew, but also spared the town from what certainly would have been a devastating plane crash.

A few years ago, Mary was fortunate enough not only to have been given a tour, with her sister, of Kimbolton as it is now, but also to have been able to take a flight in a B-17. She described it as an unforgettable experience and one that added to her understanding of her late Father. She wants others to be able to have that experience, which is why she is kindly supporting A WING AND A PRAYER. She wants to help keep Britain’s last remaining airworthy B-17 in the air, as a flying memorial to the 79,000 US and British airmen who gave their lives flying B-17’s during World War 2.

Thank you, Mary; for your support and for sharing your Dad’s remarkable story and the equally remarkable photographs.

My own thanks go to Mitch for writing the article and for gaining Mary’s permission to publish both it and her photos. I also thank Mary for taking the time to share her father’s story, it is truly a remarkable one.

‘Sweater Girl‘ was a B-17-F-VE ‘Flying Fortress’ delivered to Long Beach March 1st, 1943. She travelled to Sioux City, onto Kearney and then to Dow Field where she was assigned to the 524thBS/379thBG and Kimbolton. Her loss is detailed in MACR 2868.

The crew at the time of the crash were:

Kimbolton airfield is part of Trail 6, little exists of it, the main buildings and runways being removed many years ago. Patches of concrete do still remain and part of it forms a kart track. A memorial and a Roll of Honour stand outside what was the airfield’s technical area.