Born Thomas Jonathan Jackson Christian, jr., on November 19th 1915 in San Francisco, Colonel Christian would become known as ‘Jack’ and would have a distinguished military career.

He was the great-grandson of “Stonewall” Jackson, an outstanding commander of the Confederate army in the American Civil War, and he was the son of a Brigadier-General – the military ethos ran thick through his veins.

Christian graduated from Chicago University High School in 1933 after which he went on to University where he studied for a further two years.

After graduating, he then went on to West Point, where in 1939, he chose to follow in his father’s footsteps into Field Artillery. Here he was appointed as a Second Lieutenant. Not long after though he changed his mind, being drawn to the idea of flying, and the Army Air Corps.

His first overseas posting came in March 1941, when he was sent to the 19th BG at Clark Field in the Philippines. Here he flew the heavy bomber the B-17 Flying Fortress until the Outbreak of war, and the Bombing of Pearl Harbour and its surrounding airfields by the Japanese. He was then reassigned to Australia via a posting at Bataan. His job here was to ferry P-40 fighters.

It was during one these flights that he was shot down and declared missing. Protected and guided by the natives of the Timor Coast, he managed to find his way back to base.

In 1942, Christian was reassigned again, this time to fly fighters with the 67th Pursuit Squadron. operating out of Henderson Field, he achieved the Silver Star for his gallantry flying over 60 hours of combat flights in a Bell P-400.

In Early 1943, Christian returned to the United States, where he married Marjorie Lou Ashcroft, a woman he had met in Dallas. It was here that the now Major Christian, would join the 361st FG, becoming their first Commanding Officer. The 361st were constituted on January 28th, being activated just two weeks later. Assigned to the Eighth Air Force, it would be the last of twelve Fighter Groups to fly the P-47 Thunderbolt.

The unit trained and transited from Richmond AAB in Virginia, through Langley Field, Millville New Jersey, back to Richmond and then, via the Queen Elizabeth, on to Bottisham in England. At Bottisham, Christian flew with his men, leading them on their first operational mission on January 21st 1944, eleven months after they had been formed. It was during this very month, that Christian would become a father, his daughter being named Lou Ellen.

His first aircraft at Bottisham was P-47 ’42-75494′ coded E2-C, and he called it ‘Lou‘ after his baby girl. He had a picture of a crawling baby painted on its nose, a tribute to the baby he hadn’t yet seen.  Throughout his flying career with the 361st, Colonel Christian would fly three aircraft (successively named Lou, Lou III and Lou IV). The second aircraft 42-106787 and third 44-13410 were both P-51 Mustangs.

In March 1944, he was promoted to Colonel, he was still just 28 years of age. Whilst leading the 361st, Christian would fly over seventy combat missions his final and fatal one being on August 12th 1944.

On that day, Colonel Christian was flying his latest aircraft, P-51 ‘Lou IV’ 44-13410 in a ground attack role against the marshalling yards at Boisleux-au-Mont in France. Over the target area, accurate and heavy ground fire made flying difficult, and it was probably this that brought down his plane causing it to crash. Colonel Christian never survived and was killed in the crash, he was just twenty-eight years old.

Just weeks before the crash, Christian had taken part in a photo shoot with three other P-51s from Bottisham, which affectionately became  known as the ‘Bottisham Four’, the group appearing numerous times. The photo since became a tribute to Christian, and all that he had achieved.

At Bottisham, on what was one of the former accommodation sites, is a further tribute to Colonel Christian, a Lych Gate style memorial, it is sadly now missing its top, but was unveiled on 10th October 1955 by his daughter. 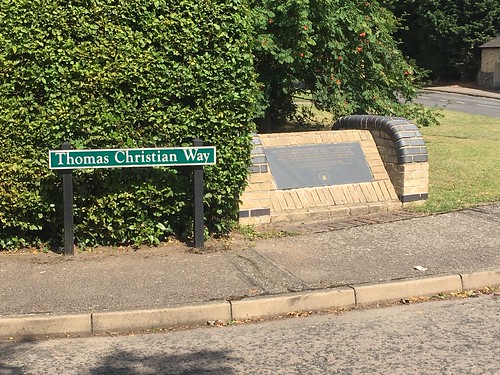 A tribute at Bottisham to Colonel Thomas Christian.

Thomas Christian appears in the Tablets of the Missing in the Ardennes American Cemetery and on the Memorial at Neuville-en-Condroz Liège in Belgium. He also has several cenotaph memorials in the Texas State Cemetery, Austin Travis County, Texas and also in the Stonewall Jackson Memorial Cemetery, Lexington, Virginia. Christian’s body has never been recovered.