RAF Sutton Bridge, was a small airfield on the Norfolk / Lincolnshire border a few miles from the Wash off the north Norfolk coast. Before, during and after the war it served as  training camp for new pilots, training them in the art of gunnery, utilising a firing range that had been in situ since 1926.

Many airmen of the RAF passed through Sutton Bridge, many of these were Commonwealth aircrew, some from Czechoslovakia and a few from the United States.

In the church yard behind the church of St. Matthew in the village, lie almost 60 graves of those who died in the fight for freedom, they are also joined by a German airman, foe united in death.

One such airmen is that of American Airman Pilot Officer William Lee Davis s/n: 61459 (RAFVR) who joined as part of the famed ‘Eagle’ Squadron, a group of volunteer American flyers.

P.O. Davis was from St. Louis and graduated at Central High School, before going on to attend Washington University. He was the son of William J. Davis of 4500 Arsenal Street, and a salesman in a cork and insulation firm in the area, when he joined up at the age of 25.

He left his job, signing with the Clayton-Knight Committee, a recruitment company for the Canadian and British Air Forces operating in the United States.  He was initially stationed at Love Field in Dallas, where he received four weeks of intensive training in aerobatics, gunnery and combat flying. After qualifying here, he transferred to Ottawa, where he was commissioned and then sent onto England to further his training. He was the first person from St. Louis to obtain a Commission in the Royal Air Force obtaining a deferment of his draft in doing so. When asked about joining the RAF, he told reporters that it was “a matter of sentiment and heritage” citing his English grandfather’s role as an officer in the Boar war.

P.O. Davis was no stranger to flying, having been a flyer before signing up for the RAFVR, achieving a total of 223 hours flying time, a commercial pilots licence and an advanced CAA Licence.

On arrival on March 5th 1941, these pilots were generally sent to No.3 Personnel Reception Centre at Bournemouth, before posting to No.56 Operational Training Unit (OTU) at Sutton Bridge. Here they completed their training and were then sent onto their respective operational squadrons.

There were something in the region of 156 American Airmen who found their way into 56 OTU, many passed through with little or only minor mishaps. For P.O. Davis though it was to be the end of his dream, in an accident that would take his life.

On March 18th, a week after his arrival at Sutton Bridge, he took off in Hurricane P5195 on a general map reading flight across the Lincolnshire Fens. Whilst on the flight P.O. Davis became lost and decided to put down on farm land at New Leake Fen near Boston. Unfortunately, the ground in the Fens was soft causing the undercarriage to dig in and flip the Hurricane on its back. In the resultant crash, P.O. Davis broke his neck killing him instantly. He was not only the first from St. Louis to die, but the first American from Sutton Bridge to die also. 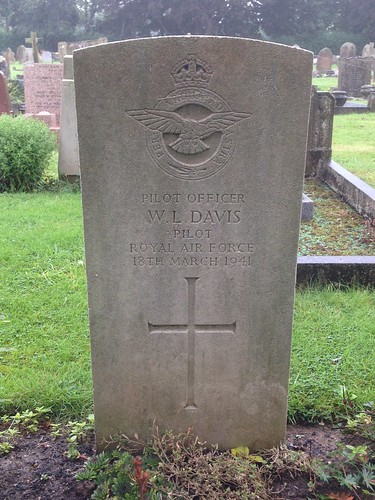