The end of October marks the end of an era, with the grounding of Avro Vulcan XH558. After an eight year reign as Queen of the skies, she finally bows out after the three main technical companies that support her, withdrew their support. In her last flight on October 28th 2015, she completed a short 15 minute flight, the culmination of 228 flights and 346 hours flying time. After a long taxi to runway 02 at Robin Hood Airport, she performed her last flight to a small crowd of gathered people whilst streaming the event live on YouTube. Creating her own cloud, she had the grace of an angel, performing a touch and go before landing for good and so closing the book on this remarkable story. 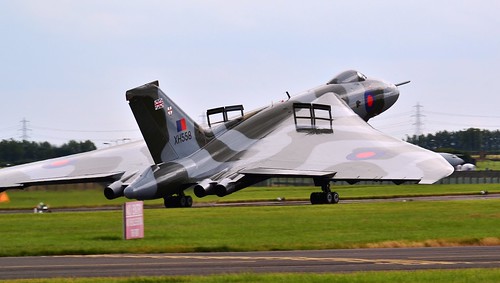 The Vulcan was the last of the Cold War bombers to fly and achieved a great following across the country. The ‘Vulcan effect’ as it became affectionately known would draw thousands to street corners, road sides and airshows just to see the graceful bird and hear her incredible howl.

The first flight of XH558 as she returned to the sky after a 14 year restoration.

For me personally the Vulcan was the aircraft I used to watch as a child from my parent’s bedroom window; my first real close up, large jet aircraft and one of the many that drove my love of aviation. They would do circuits around Bitteswell airfield following maintenance or upgrading, so it seems fitting therefore, that the last time I would see her in person, would again be from my own back garden so many years later as she flew over my home. 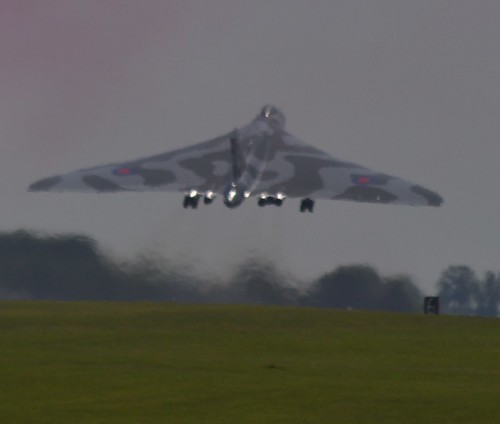 Lots of jet wash on take off at Waddington 2013

Famed for flying to the Falkland Islands and bombing the runway at Port Stanley airport,  Vulcans supported by 13 Victor tankers, undertook the longest bombing raid on military record. An incredible feat and one that will go down in history for a very long time, probably eternity.

Designed initially by Roy Chadwick and built by the Avro company, it was one of many iconic aircraft to leave the Avro works. Shown to the public for the first time at Farnborough in August 1952, a Vulcan went on in 1955 to perform an amazing barrel roll much to the amazement of the crowd. Designed to carry weapons of mass destruction, the Vulcan formed the backbone of Britain’s nuclear deterrent and would carry a nuclear warhead to Russia should the demand arise. Crews were on standby 24 hours a day, 365 days a year ready to take off knowing they would probably not be returning. The Vulcan had a  truly devastating punch. Her beauty and grace were matched only by her prowess and destructive power. 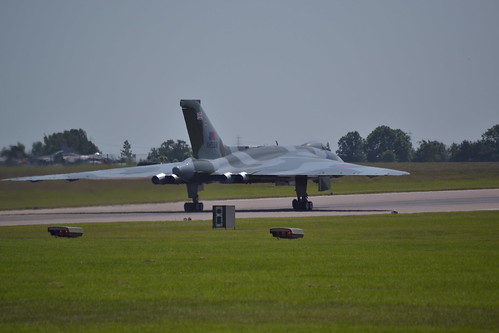 XH558 in particular was the RAF’s own display aircraft for 33 years eventually retiring from service in 1993. Bought and maintained by C Walton Ltd, she would go on to be cared for by the Vulcan to the Sky Trust. She was flown to Bruntingthorpe and refurbished to airworthy status  over a period of 14 years at a cost of £7,000,000. XH558 was then flown to her new home at Doncaster airport, itself a former Vulcan bomber station, RAF Finningley.

From there she would undertake a huge number of flights, displaying to thousands across a range of airshows around Britain, far exceeding her original target of 250 hours flying time such was the demand to see her.

Eventually though her time would come, and even with the huge public support, the technical skills needed and provided by: B.A.E., Rolls Royce and Marshall Aerospace, have finally been pulled and her flying days are now over.

XH558 flies over for the last time.

XH558 will continue to reside at Doncaster in a Heritage centre alongside a new Technical School. She will be kept in taxiing condition, still run her engines and keep full electrical power. A new era dawns, and she joins the other grounded Vulcans, with  a new vision and a new life.

With the grounding of XH558, airshows across Britain won’t be the same, but at least she had the chance to fly again and amaze the thousands who flocked repeatedly to see a mighty Vulcan fly in Britain’s skies once more.

Sadly, I didn’t get to see her on her last tour of Britain, but even the Vulcan can’t be everywhere at once. I have some fantastic memories of her, from Waddington to Eastbourne, with the two Lancasters at Marham, and many, many more that I have gathered over the years.

For the chance to see a Vulcan in the skies again, to the team and XH558, from me personally, a very big heartfelt thank you.

The First of two tours forming the farewell flight of XH558 from inside the cockpit.

Pledges and support can continue to be offered for the upkeep of 558 through their dedicated website. Her history, visits and other information can also be accessed through this link.