We have seen through the many ‘Heroic tales‘, acts of daring and valour that have astounded the average man in the street. Acts of heroism that were completed without forethought or consideration for personal safety, where the lives of fellow crewmen and their aircraft were put far beyond that of their own.

Some of these included flying an aircraft with astonishing injuries, staying with an aircraft until such times as all the crew have either left – or because they have been unable to leave – remaining at the controls to attempt a landing without help or hydraulics. There have even been cases of airmen exiting the aircraft to extinguish external fires whilst both at altitude and at speed. Indeed this is not a solitary occurrence; a number of airmen have been known to have performed such acts, some successfully others less so. But the fact that an airmen is willing to perform such an act of bravery, is in itself, incredible.

One such action occurred in July 1941 and was performed by 2nd Pilot Sgt. James Allen Ward (RNZAF) of 75 (NZ) Sqn, RAF Feltwell.

Sgt. Ward, the Son of Mr. Percy Harold Ward and Mrs. Ada May Ward, of Wanganui, Wellington, New Zealand was born on 14th June 1919, and was, following his training, posted to 75 (NZ) Sqn then at RAF Feltwell in Norfolk. The squadron were operating the new Vickers Wellington MK.Ic, or ‘Wimpey‘ as it was affectionately known, on a bombing mission to Munster in Germany.

The flight out was uneventful, with no interactions with either flak nor Luftwaffe night fighters. Over the target, bombs were released and several fires were seen to light, although German reports stated that little damage was done and no casualties were incurred.

The return leg took the formation over the Zuider Zee at which point the Wellington was strafed by canon fire from an Me 110 flying beneath it. As shells ripped though the fuselage, the rear gunner was injured in the foot but managed to return fire sending the attacker plummeting to Earth with heavy smoke pouring from the port engine.

Shortly after this, the Wellington’s wing, housing a fuel line damaged in the attack, itself caught fire and with the aircraft having a fabric covering, it was only a matter of time before it would also fall to Earth in a massive fireball.

With S/L Widdowson struggling to control the aircraft, which had had half its rudder shot away, its elevators severely damaged, hydraulics ruptured, flaps inoperable and bomb doors opened and damaged; a decision had to be made as to what to do next.

A bale out appeared to be the only safe and viable option. S/L. Widdowson gave the order and the crew began preparations to depart the stricken aircraft. Almost as a last minute attempt to save it, Widdowson instructed the crew to try and extinguish the fire, and they began ripping away the fabric covering the geodesic framework. Ward, grabbing a fire extinguisher, shot jets of agent through the hole toward the fire. At altitude and speed, the air stream was far too strong and the attempt had little effect on the burning engine.

At this point, and without attention to his own safety, Sgt. Ward decided to climb out and try to smother the fire with a canvas engine cover that had been used to raise S/L. Widdowson’s seat. Much to the dismay and protests of the other crewmen, Ward grabbed a parachute and attached a rope to himself and the Navigator, and began to climb out through the astrodome located between the wings in the fuselage’s ceiling. By punching holes in the aircraft’s fabric, he was able retain a foot and hand hold on to the aircraft, manoeuvring himself tight against the air frame toward the burning wing.

Once out onto the starboard wing, he approached the fire and pushed the canvas into the hole left by the flames. The fire burning furiously by now, was intense, and caused Sgt. Ward great pain forcing him to withdraw his hand several times before the slipstream finally caught the canvas tearing it from the hole and out into the dark night sky.

Being partially successful, there was little left for Sgt. Ward to do, so he began the arduous journey back toward the aircraft’s fuselage and its relative safety. By smothering the fire as he did, Ward’s attempts had made a difference, and shortly afterwards the fire extinguished itself enabling both the aircraft and crew to return to England safely making an emergency landing at RAF Newmarket Heath.

The Wellington with ‘hand-tholes’ after Sgt Ward tried to extinguish the fire.  (A) The hole caused by shell and, afterwards, by fire; (B) The Astro-Hatch through which Sergeant Ward, VC climbed; (1, 2 and 3) Holes kicked in the fabric by Sergeant Ward.(IWM CH3223)

Landing at 04:30, the Wellington came to a stop only after striking a fence on the airfield boundary, its brakes being totally unusable.

For his action, Sgt. James (Jimmy) Ward was awarded the Victoria Cross, the highest honour for bravery and extraordinary courage; he was the first New Zealander to win such an award during the Second World War. S/L. Widdowson for his actions, was awarded an immediate D.F.C. whilst Sgt. Box, the D.F.M.

At the time of the incident Sgt. Ward was only 22 years of age, he would be given his own crew and would go on to complete ten missions in total before, on the eleventh, being shot down and killed in another Wellington of 75 (NZ) Sqn over Hamburg on September 15th 1941.

Sgt Ward’s death brought a severe blow to the crews of 75 (NZ) Sqn, who perhaps thinking him invincible, went on to perform with great pride and determination in the face of great adversity. With over 8,000 sorties flown, the highest of any squadron in 3 Group, came a high cost, 193 aircraft being lost, the second highest of any Bomber Command Squadron of the Second World War.

Sgt Ward’s body was recovered from the crash that killed him, and along with his three comrades was laid to rest in the Ohlsdorf Cemetery in Hamburg, CWCG Plot 5A. A1. 9. 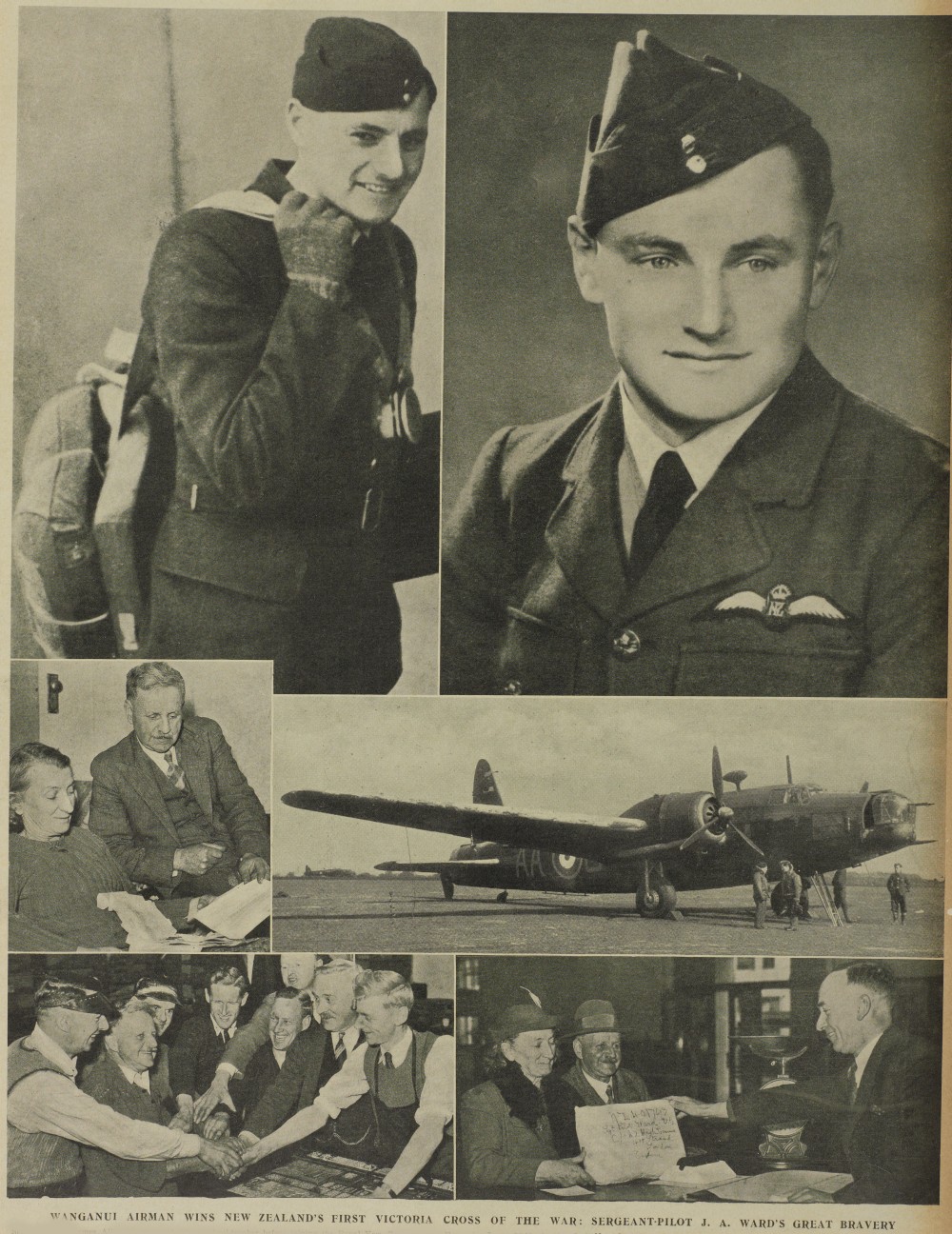 “On the night of 7th July, 1941, Sergeant Ward was second pilot of a Wellington returning from an attack on Munster.

When flying over the Zuider Zee at 13,000 feet, the aircraft was attacked from beneath by a Messerschmitt which secured hits with cannon shell and incendiary bullets. The rear gunner was wounded in the foot but delivered a burst of fire which sent the enemy fighter down, apparently out of control.

Fire then broke out near the starboard engine and, fed by petrol from a split pipe, quickly gained an alarming hold and threatened to spread to the entire wing. The crew forced a hole in the fuselage and made strenuous efforts to reduce the fire with extinguishers, and even the coffee in their vacuum flasks, but without success. They were then warned to be ready to abandon the aircraft.

As a last resort, Sergeant Ward volunteered to make an attempt to smother the fire with an engine cover which happened to be in use as a cushion. At first he proposed to discard his parachute, to reduce wind resistance, but was finally persuaded to take it. A rope from the dingy was tied to him, though this was of little help and might have become a danger had he been blown off the aircraft. With the help of the navigator, he then climbed through the narrow astro-hatch and put on his parachute. The bomber was flying at a reduced speed but the wind pressure must have been sufficient to render the operation one of extreme difficulty.

Breaking the fabric to make hand and foot holds where necessary, and also taking advantage of existing holes in the fabric, Sergeant Ward succeeded in descending three feet to the wing and proceeding another three feet to a position behind the engine, despite the slipstream from the airscrew which nearly blew him off the wing. Lying in this precarious position, he smothered the fire in the wing fabric and tried to push the cover into the hole in the wing and on to the leaking pipe from which the fire came. As soon as he removed his hand, however, the terrific wind blew the cover out and when he tried again it was lost. Tired as he was, he was able with the navigator’s assistance, to make successfully the perilous journey back into the aircraft.

There was now no danger of fire spreading from the petrol pipe, as there was no fabric left nearby, and in due course it burnt itself out. When the aircraft was nearly home some petrol which had collected in the wing blazed up furiously but died down quite suddenly. A safe landing was then made despite the damage sustained by the aircraft.

The flight home had been made possible by the gallant action of Sergeant Ward in extinguishing the fire on the wing in circumstances of the greatest difficulty and at the risk of his life.”