The story of Leon Vance is one of  the saddest stories to emerge from the Second World War. He was a young American, who through his bravery and dedication, saved the lives of his colleagues and prevented their heavily stricken aircraft from crashing into populated areas of southern England. Following a mission over France, his was very severely injured, but miraculously fought on.

Leon Robert Vance, Jr. known as ‘Bob’ to his family and friends, was born in Enid, Oklahoma, on August 11th, 1916. He graduated from high school in 1933 after receiving many honours and being singled out as a high performing athlete. He went on, after University, to the prestigious Training College at West Point in 1935, staying until his graduation four years later in 1939. It was here, at West Point, he would meet and marry his wife Georgette Brown. He and Georgette would later have a daughter, after whom Vance would name his own aircraft ‘The Sharon D’.

Vance would become an aircrew instructor, and would have various postings around the United States. He became great friends with a Texan, Lieutenant Horace S. Carswell, with whom he would leave the Air Corps training program to fly combat missions in B-24 Liberators. They became great friends but would go on to fight in different theatres.

Prior to receiving his posting, Vance undertook training on Consolidated B-24s. Then, in October 1943, as a Lieutenant Colonel, he was posted to Europe with the newly formed 489th Bombardment Group (Heavy), as the Deputy Group Commander. One of the last groups to be assigned to the European theatre, they formed part of the 95th Combat Bombardment Wing (2nd Bomb Division),  Eighth Air Force, and were sent to RAF Halesworth (RAF Holton) designated Station 365 by the USAAF.

The group left their initial base at Wendover Field, Utah in April / May 1944 and their first mission would be that same month on May 30th, 1944, as part of a combined attack on communication sites, rail yards and airfields. A total of 364 B-24s were to attack the Luftwaffe bases at Oldenburg, Rotenburg and Zwischenahn, along with other targets of opportunity far to the north in the German homeland. With only 1 aircraft lost and 38 damaged, it was considered a success and a good start to the 489th’s campaign.

As the build up to Normandy developed, Vance and the 489th would be assigned to bombing targets in northern France in support of the Normandy invasion about to take place further to the south. An area the unit would concentrate on, prior to the Allied beach invasion on June 6th that year.

The day before D-day, the 489th would fly to Wimereaux, in the Pas-de-Calais region of northern France. This would be Leon Vance’s final mission.

The group, (Mission 392),  consisted of 423 B-17s and 203 B-24s and were to hit German coastal defences including: Le Havre, Caen, Boulogne and Cherbourg areas as  a precursor to the Normandy invasion. Some 127 P-47s and 245 P-51s would support the attacks. The 489th would assemble at 22,500 feet on the morning of June 5th, proceed to the south of Wimereaux, fly over dropping their payload, and then return to England. On the run in to the target, Vance was stationed behind the pilot and copilot.  The lead plane encountered a problem and bombs failed to jettison. Vance ordered a second run, and it was on this run that his plane, Missouri Sue, took several devastating hits.

Four of the crew members, including the pilot were killed and Vance himself was severely injured. His foot became lodged in the metal work behind the co-pilots seat. There were frantic calls over the intercom and the situation looked bad for those remaining on board. To further exacerbate the problems, one of the 500lb bombs had remained inside the bomb bay armed and in a deadly state, three of the four engines were disabled, and fuel spewed from ruptured lines inside the fuselage.

Losing height rapidly, the co-pilot put the aircraft into a dive to increase airspeed. The radio operator, placed a makeshift tourniquet around Vance’s leg, and the fourth engine was feathered.  They would then glide toward the English coast.

The aircraft was too damaged to control safely, so once over English soil, Vance ordered those who could, to bail out. He then turned the aircraft himself out to the English Channel to attempt a belly landing on the water. A dangerous operation in any aircraft, let alone a heavy bomber with an armed bomb and no power.

Still trapped by the remains of his foot, laying on the floor and using only aileron and elevators, he ensured the remaining crew left before the aircraft struck the sea. The impact caused the upper turret to collapse, effectively trapping Vance inside the cockpit. By sheer luck, an explosion occurred that threw Vance out of the sinking wreckage,  his foot now severed.  He remained in the sea searching for whom he believed to be the radio operator, until picked up by the RAF’s Air Sea Rescue units.

Vance was alive, but severely injured. He would spend a number of weeks, recuperating in hospital, writing home and gradually regaining his strength. Disappointed that his flying career was over, he looked forward to seeing his wife and young child once more. However, on a recuperation trip to London, Vance met a young boy, who innocently, and without thought, told him he wouldn’t miss his foot. The emotional, impact of this comment was devastating to Vance and he fell into depression. Then, news of his father’s death pushed him down even further.

Eventually, on July 26th, 1944 Vance was given the all clear to return home and he joined other wounded troops on-board a C-54, bound for the US. It was never to arrive there.

The aircraft disappeared somewhere between Iceland and Newfoundland. It has never been found nor has the body of Leon Vance or any of the others on board that day. Vance’s recommendations for the Medal of Honour came through in the following  January (4th), but at the request of his wife, was delayed until October 11th 1946, so his daughter could be presented the medal in her father’s name.

The citation for Leon Vance reads:

“For conspicuous gallantry and intrepidity above and beyond the call of duty on 5 June 1944, when he led a Heavy Bombardment Group, in an attack against defended enemy coastal positions in the vicinity of Wimereaux, France. Approaching the target, his aircraft was hit repeatedly by antiaircraft fire which seriously crippled the ship, killed the pilot, and wounded several members of the crew, including Lt. Col. Vance, whose right foot was practically severed. In spite of his injury, and with 3 engines lost to the flak, he led his formation over the target, bombing it successfully. After applying a tourniquet to his leg with the aid of the radar operator, Lt. Col. Vance, realizing that the ship was approaching a stall altitude with the 1 remaining engine failing, struggled to a semi-upright position beside the copilot and took over control of the ship. Cutting the power and feathering the last engine he put the aircraft in glide sufficiently steep to maintain his airspeed. Gradually losing altitude, he at last reached the English coast, whereupon he ordered all members of the crew to bail out as he knew they would all safely make land. But he received a message over the interphone system which led him to believe 1 of the crew members was unable to jump due to injuries; so he made the decision to ditch the ship in the channel, thereby giving this man a chance for life. To add further to the danger of ditching the ship in his crippled condition, there was a 500-pound bomb hung up in the bomb bay. Unable to climb into the seat vacated by the copilot, since his foot, hanging on to his leg by a few tendons, had become lodged behind the copilot’s seat, he nevertheless made a successful ditching while lying on the floor using only aileron and elevators for control and the side window of the cockpit for visual reference. On coming to rest in the water the aircraft commenced to sink rapidly with Lt. Col. Vance pinned in the cockpit by the upper turret which had crashed in during the landing. As it was settling beneath the waves an explosion occurred which threw Lt. Col. Vance clear of the wreckage. After clinging to a piece of floating wreckage until he could muster enough strength to inflate his life vest he began searching for the crew member whom he believed to be aboard. Failing to find anyone he began swimming and was found approximately 50 minutes later by an Air-Sea Rescue craft. By his extraordinary flying skill and gallant leadership, despite his grave injury, Lt. Col. Vance led his formation to a successful bombing of the assigned target and returned the crew to a point where they could bail out with safety. His gallant and valorous decision to ditch the aircraft in order to give the crew member he believed to be aboard a chance for life exemplifies the highest traditions of the U.S. Armed Forces”*2

Leon Vance’s actions would be remembered. His local base in Oklahoma was renamed ‘Vance Air Force Base’ on July 9th, 1949. The gate at Tinker Air Force Base, Oklahoma was also later named after him on May 9th, 1997, and his name appears on the ‘Wall of the Missing’ at Madingley American War Cemetery in Cambridge, England. 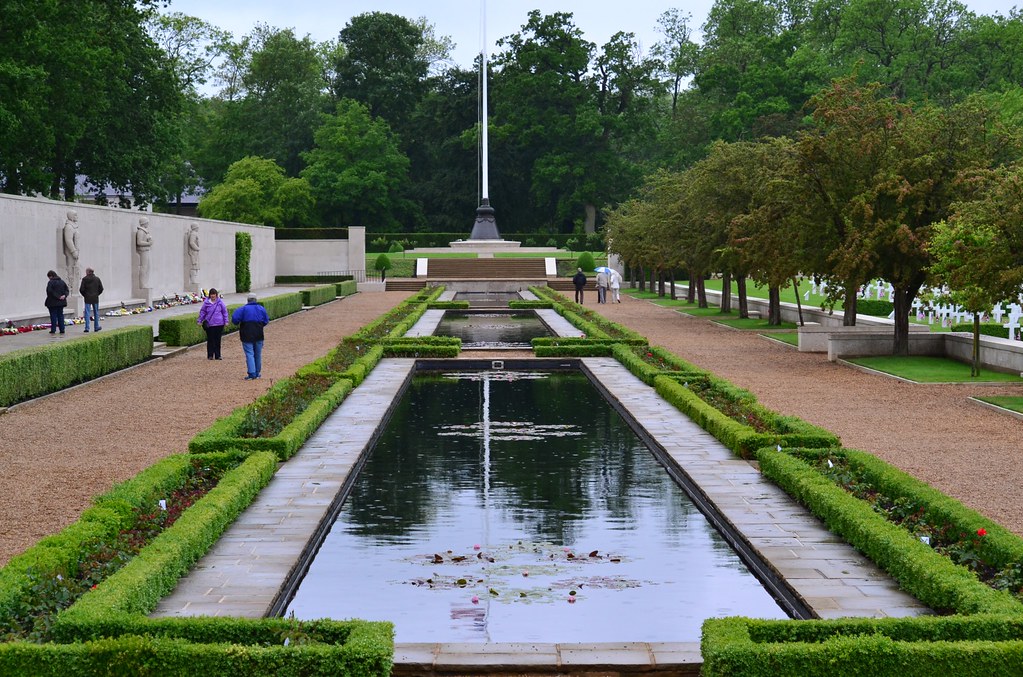 The American War Cemetery, Madingley. Leon Vance’s Name Appears on the wall of the missing (to the left of the picture).

For other personal tales, see the Heroic Tales Page.