If visiting the airfields of North Norfolk, then a stop at the grand 17th Century Blickling Hall is a must. Here, not only do we have a house that dates back some 400 years, but an estate that goes back even further to the 15th Century, and once belonged to the Boleyn family. A mix of Jacobean architecture, grand paintings and tapestries complement a library that contains one of the most historically significant collections of manuscripts and books in England. Walks that take you through a 4,800 acre estate of gardens, wild meadows and woodland, are brimming with wildlife. Even on busy days, you cannot fail to enjoy the peace and tranquillity, the inviting waters of the lake and views over the Norfolk countryside. 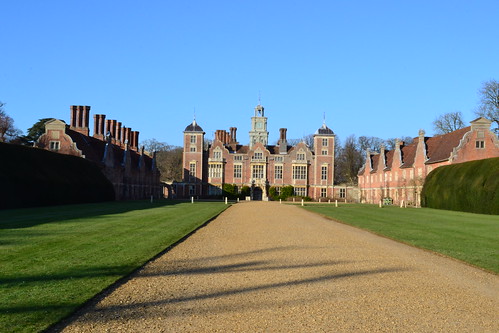 Blickling Hall, the Museum can be found in the buildings to the right hand side.

But equally important, you have a house that once belonged to Philip Kerr, 11th Marquis of Lothian, Britain’s Ambassador to the United States. Lord Lothian, played a major part in Britain’s war, convincing Churchill to write to Roosevelt, explaining the consequences of a Nazi victory in Europe and the poor defensive position Britain lay in at that time.  A letter that began a chain of events including Lord Lothian’s speech to the American people, that eventually led to the ‘Lend-Lease’ programme being initiated and arms allowed to flow into Britain.

A few miles from Blickling, is the airfield RAF Oulton, part of 100 Group commanded by Air Commodore Addison, whom the farm at RAF Foulsham is named after. Oulton utilised much of the house and grounds of Blickling, billeting officers in its ‘wings’ and other ranks in Nissen huts within its grounds. The lake was regularly used for dingy training, the upper floors allowed for bathing in baths – a real luxury for aircrews in the Second World War.

Housed within one of the ‘wings’, is a small museum, the RAF Oulton Museum.

The museum itself is situated in the upper floors on the eastern side, utilising one of the former barrack blocks used by the RAF. The original paintwork still colours the walls and a ‘mock’ billet has been recreated using original furniture sourced from local shops, auctions and through donations.

The museum holds a unique collection of photographs, personal letters and stories gathered over a number of years accumulating into a fascinating record of life at RAF Oulton only a few miles away.  The winter of 1944-45 was one of the worst on record and many of the photographs show crew members relaxing in the snow on and around the base.

Letters tell of the local people, their connections with the base, the pub outside the main gate formerly the ‘Bird in Hand’, (now a private residence) and the Buckinghamshire Arms next to Blickling Hall, (still a pub) where crews would spend their evenings and ‘free’ time.

Log books and uniforms from those stationed at Oulton, along with a mix of original artefacts and replica newspapers, all help to recreate the atmosphere of an RAF billet. It is packed with historical and personal information – a real gem for those interested in history and life on the RAF base.

A great little museum, it is certainly worth a visit.

More information about Blickling Hall and the RAF Museum can be found on the National Trust Website.