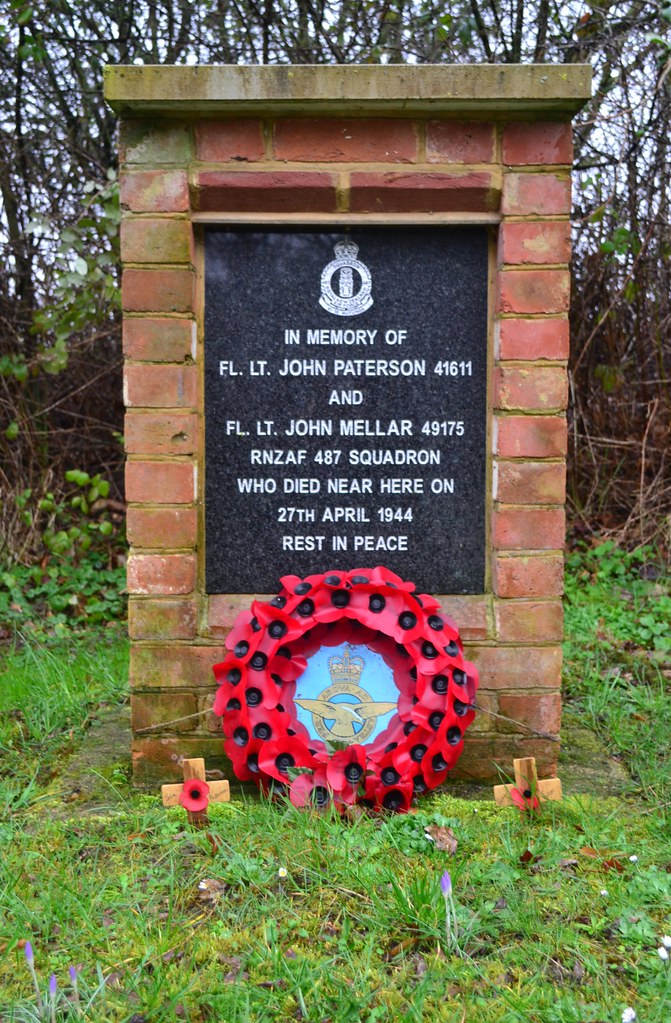 On April 25/26th 1944, 487 Sqn (RNZAF) moved from RAF Gravesend to RAF Swanton Morley in Norfolk, taking with them D.H. Mosquitoes. They had only been at Gravesend a few days when news of the new move came through.

487 Sqn had previously been involved in ground attacks on German airfields across the occupied countries, and in several high profile missions. In particular, during the previous February, they had been involved in Operation ‘Jericho‘, the attack on the Amiens Jail, in France. It was also a Methwold based Ventura piloted by Squadron Leader Leonard H. Trent, who, on 3rd May 1943, had led the Squadron in a disastrous daylight attack on the power station at Amsterdam. As a result of his actions that day, Sqn. Ldr. Trent received the V.C., the highest honour bestowed on personnel of the armed forces.

On their arrival at Swanton Morley, 487 Sqn would immediately begin training for new air operations, their part in the forthcoming D-day invasion at Normandy, with the first flights taking off the following day.

On April 27th three ‘targets’ were chosen, the Grimston Range not far away from Swanton Morley, the Bradenham Range in the Chilterns, and lastly the Army Gunnery School site at Stiffkey, on the North Norfolk coast. Each of these were to be ‘attacked’ in cross country sorties by the Mosquitoes.

The day’s sortie went well, until the return flight home was made. It was on this leg of the flight that the port engine of the Mosquito, a Hatfield built FBVI ‘NS828’ under contract 555/C.23(a), began to overheat.

Immediately Flt. Lt. Paterson feathered the engine – now flying on just one. The Mosquito was lined up on approach to Swanton Morley for a single-engined landing, but all did not go well. Unfortunately,  instead of putting the aircraft down on the runway, the aircraft overshot the airfield crashing into a field beyond, the resultant accident killing both pilot and navigator instantly.

“Formation dive bombing on Grimstone [sic] range. Low level bombing on Bradenham Range. Formation cross country with air to sea firing practice off the coast at Wells. In the evening six aircraft carried out formation attacks on gun positions at an army Gunnery School at Stiffkey. Returning from this ‘A’, F/Lt. Paterson developed engine trouble and feathered the airscrew.  In attempting to land, he overshot and crashed. F.Lt. Paterson and his navigator F. Lt. Mellar, were both killed.”

Since then, a memorial has been erected in memory of the two men, located on the side of the B1110 Dereham Road just outside the village of North Elmham in Norfolk, it stands not far from the site of the crash site, west of Swanton Morley airfield. After the crash, Flt. Lt. Paterson’s body was buried at Shepperton Church Cemetery, whilst Flt. Lt. Mellar was buried at Brookwood Military Cemetery plot 24. D. 20.

Flight Lieutenant Mellar was 29 on the date of his passing, he was the son of William Edward and Eleanor Mellar; and husband of Dorothy Freda Mellar. Flight Lieutenant Paterson was 24 years of age, he was the son of John Alexander and Alice Louise Paterson, of Papakura, Auckland, New Zealand, and husband of Doris Josephine Paterson, of Shepperton.