Whilst primarily focussed on detailing the disappearing airfields of Britain, I find it important to appreciate what it was the Royal Air Force and her allies were up against, and that to be able to appreciate the enormity and structure of these forces helps to appreciate the lives of those studied.

A breakdown of the USAAF Command and Airforces have been done, and whilst none of these explanations go into enormous depth (I have neither the expert knowledge nor the resources to deal at that level) they do hopefully give an explanation of the general layout of the relative force in question. With this in mind, I have now tackled the Luftwaffe and have hopefully provided a layman’s view of its formation and size. My German is poor to say the least, and if I have misspelt any words through translation, I sincerely apologise.

The Luftwaffe were a fearsome, well equipped and highly trained force, who when in support of the Panzers and other ground forces, must be considered one of the best armed forces in history.

Following the Treaty Of Versailles, the German armed forces were cut to the bone and useless for Hitler’s vision of a powerful and dominating Germany. He would therefore have to commence a massive rebuilding plan along with research and development of ships, tanks and aircraft in order to build up his Third Reich and fulfill this vision.

With growth and development of the Luftwaffe happening almost unabated, Hitler was able to create a substantial force, that was well equipped and well-trained. Many models being developed under the guise of ‘Passenger’ aircraft, they were easily adapted to become bombers or troop carriers thus hiding the real reason for development.

With the outbreak of the Spanish Civil War, Hitler offered his Luftwaffe as ‘support’, whereas some historians believe this to have been a front for a rehearsal for the forthcoming invasion of Germany’s neighbours later on.

Not surprisingly, records show that a huge build up of military aircraft occurred along the eastern frontiers of Germany in the months prior to the invasion of Poland. The writing was on the wall and once the blitzkrieg started, and the forces of the Third Reich took more and more territory, the network of support needed to sustain them also needed to grow. This expansion led to changes in the supply structure of the various forces enabling them to deal effectively with the new challenges that they now faced. As an attacking force, in September 1939, there were high numbers of bombers 1,458 in all, including ground attack and dive bombers compared to 1,077 single and twin-engined fighters. Clearly a force for invasion and not one of defence.

As the war progressed, these numbers changed. By April 1945, there were known to be 1,305 day fighters, a further 485 night fighters and only 37 multi engined bombers. A significant shift from attack to defence.

Throughout the conflict, up until the last few months of the war, the hierarchy of the Luftwaffe remained as it was. But in the dying days it began to crumble and this most powerful force soon became disorganised and demoralised.

The Luftwaffe was divided into two parts, the overall responsibility lay with Herman Goring – Commander-in-Chief of the Air Force (Oberbefehlshaber der Luftwaffe) who controlled both The Luftwaffe High Command (Oberkommando der Luftwaffe) and The State Minister for Air (Reichsminister der Luftfahrt). His office was within the Air Ministry (Reichsluftfahrt Mininsterium) located in the heart of Nazi Germany in Berlin. The High command, were concerned with military actions, whilst the Ministry for Air, dealt with the administration side of the Luftwaffe. 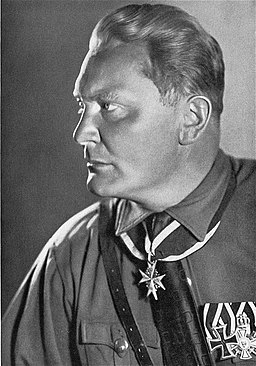 The Luftwaffe High Command was further sub-divided into a number of different directorates covering areas such as: operations, organisation, Training, Movements, Intelligence, Equipment, and personnel. These were then sub-divided further some coming under the command of the Chief of Operations and others the Chief of the General Staff.

Within this branch of the Luftwaffe were two main levels, a forward and a rear. The forward codenamed ‘Robinson’ fell under the Chief of General Staff and were located close to Hitler’s headquarters. This echelon composed of the intelligence and operations directorates and wherever Hitler went, they followed. The second echelon, codenamed ‘Kurfurst’ were more widely spread around Berlin, but all the directorates kept in very close and constant contact.

Regular meetings between Hitler and the leaders of these three services (Ministry for Air, ‘Robinson’ and ‘Kurfurst’) would determine the actions of the Luftwaffe as a whole with orders being passed directly to those in charge of the flying units.

Beneath these top sections lay the Luftwaffe itself, operationally split into 4 fleets (Luftflotten):

Luftflotte 4 – commanded by Alexander Lohr in Vienna who controlled the south-east, Austria and Czechoslovakia.

As the war progressed, further fleets were added:

Actual flying units, were given as much autonomy as possible, being freed of all administrative duties where they could. This was to allow for a rapid response to ever-changing demands on or near the front and would involve breaking each Luftlotte into zones (Luftgaue) who monitored and organised the airfields within their own zone. This sectioning allowed for the rapid and efficient movement of flying units between zones without the unnecessary problems of obtaining  supplies and slow administration.

The chain of command was tight, well organised and efficient, the Luftwaffe was a major force to be reckoned with.

In the second part we shall examine the flying units themselves.

Other pages relating to the Luftwaffe can be found here.