On April 26th 1944, the RAF sent 206 Lancasters and 11 Mosquitoes from No. 5 Group, along with 9 Lancasters from No. 1 Group, to attack the notorious ball bearing factories at Schweinfurt in Bavaria.

Schweinfurt, had since August 1943, struck fear into the the hearts of allied airmen, ever since the USAAF’s attack on the city resulted in a disaster in which 230 unescorted B-17s were cut to pieces by German defences. Subsequent raids, whilst not as disastrous, had also proven costly, and it was a target that Bomber Command’s Commander in Chief, Sir Arthur Harris, so vividly wanted to avoid.

The attention Schweinfurt was getting from the Allies, gave the German authorities sufficient concern to force them into spreading their ball-bearing production far and wide across Germany. This aligned with the fact that the Swiss and Swedes were supplying large quantities of ball-bearings to the Germans, led Harris to believe it was a target for the American forces to deal with, and not Bomber Command. 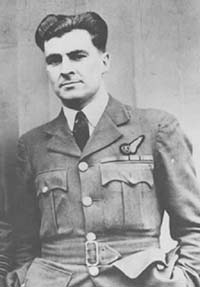 Much against his wishes, an order under the ‘Point-blank’   directive was given, and Harris sent his men to attack the factories. With smoke screens surrounding the area, it proved difficult to hit, as the attack in February proved.

In April, they were to go again, this time using a new low-level target marking technique devised by the then Wing Co. Leonard Cheshire. It would be in this mission that the remarkable actions by the crew of Lancaster ME669, and in particular Flight Engineer Sergeant Norman C. Jackson (later Warrant Officer), would become well known.

At RAF Metheringham in Lincolnshire, sixteen Lancasters completed their ground checks, started their engines and began the taxi along to the runway’s threshold. For around fifteen minutes between 21:30 and 21:45, the heavily laden aircraft took off and headed along the first long unbroken leg 130 miles into enemy held territory.

On approach to the target the formation encountered strong headwinds and no cloud. With a new moon, they were going to be easy targets for the Nachtjägers. These winds blew markers off track, and repeated efforts by the master bomber to relay instructions to the crews failed, primarily due to faulty radio equipment.

Throughout the run-in over the city, attacks were fierce and consistent. Confused by poor messages and inaccurately placed markers, bombs fell well away from their intended targets. By now fourteen aircraft had already been lost to the fighters, many of them the ghostly Schräge Musik, upward firing fighters.

After bombing from 21,500 feet, Lancaster ‘ZN-O’ was hit several times by a night fighter, starting a fire started in the inner starboard wing section next to the upper fuel tank.  Sgt. Jackson, who had been wounded in the leg and shoulder, donned his parachute and grabbed a fire extinguisher before climbing out on to the wing through an escape hatch in the fuselage roof. In doing so, his parachute was deployed into the cockpit area, where his colleagues gathered it up and gradually fed the lines through the hole allowing Jackson to gain access to the fire in the wing. Undertaking such an act on a burning aircraft at speed and altitude, was no easy task, and getting back, had he been successful, virtually impossible. The wind knocked the extinguisher out of his grip which prevented Jackson from succeeding in achieving his aim. The fire now spreading, began to burn his parachute, hands and face and fearing for his safety, his colleagues let go releasing him from the stricken bomber. Sgt. Jackson fell to Earth, his parachute partially burned, opened and allowed him to reach the ground alive, but suffering several injuries in the process. 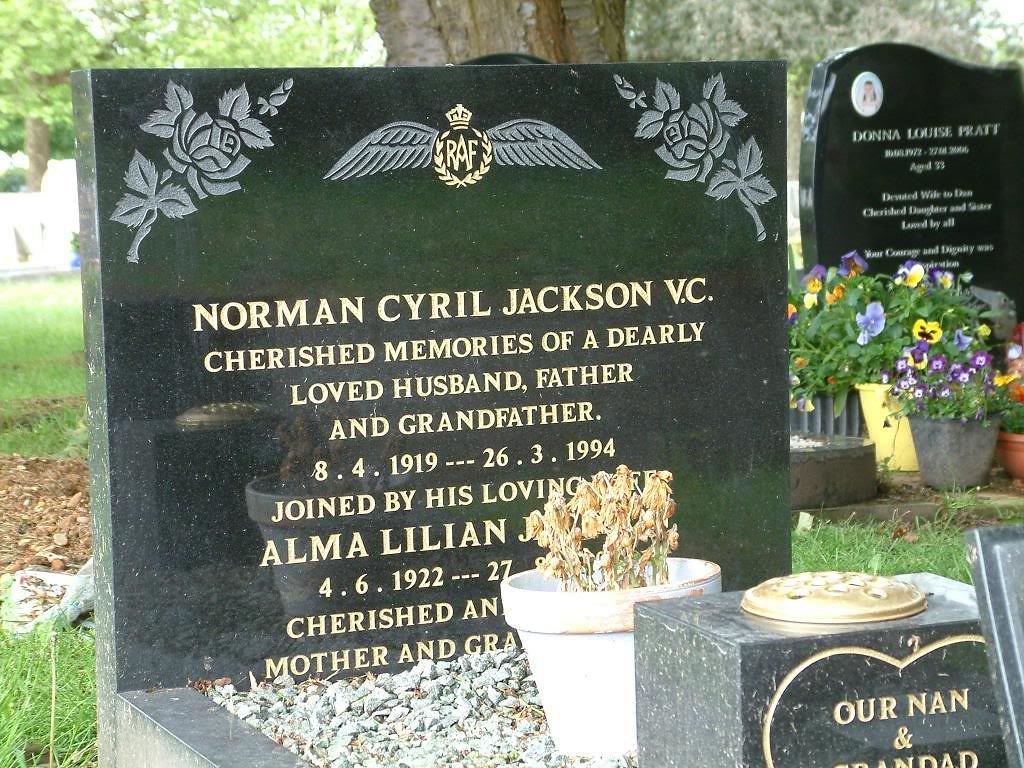 Sgt. Jackson’s Grave. He died almost 50 years to the day after his brave attempt to save teh aircraft and crew. (Photo Paul Cannon)

The 21 year old Canadian Captain, F/O. Frederick M. Miffin D.F.C., then ordered the crew to abandon the aircraft; himself and 20 year old F/Sgt, Norman H. Johnson, both failing to survive.

Sgt. Jackson’s brave attempt to save his colleagues and their aircraft earned him the Victoria Cross, his actions being published in the Fourth Supplement to the London Gazette on Tuesday 23rd October 1945.

25 year old Sgt. Jackson from London, had been with the crew since training at Wigsley, and had completed his tour of duty. He volunteered for the Schweinfurt mission so he could be with his own crew as they completed their own tour of duty, before all going to join the Pathfinders. Earlier that same day, Sgt. Jackson had received news that he was now a father too.

Sgt. Jackson spent ten months in hospital before eventually being repatriated. He received his VC at the same time as the then, Wing Commander Leonard Cheshire, would receive his. Cheshire asking for Jackson to receive his first, citing his selfless act of bravery as going far beyond anything he had achieved himself.

This airman’s attempt to extinguish [sic] the fire and save the aircraft and crew from falling into enemy hands was an act of outstanding gallantry. To venture outside, when  travelling at 200 miles an hour, at a great height and in intense cold, was an almost incredible feat. Had he succeeded in subduing the flames, there was little or no prospect of his regaining the cockpit. The spilling of his, parachute and the risk of grave damage to its canopy reduced his chances of survival to a minimum. By his ready willingness to face these dangers he set an example of self-sacrifice which will ever be remembered.