Not only is Herne Bay in Kent famous for the location of the World Air Speed Record and its strong links to Barnes Wallis and the RAF’s 617 Sqn, but it is also linked to a famous female aviator, one who set many world records before her mysterious disappearance over the North Sea.

In Trail 44, we continue with the famous people theme, and see how this corner of Kent saw yet another link to aviation, this time very under tragic circumstances. 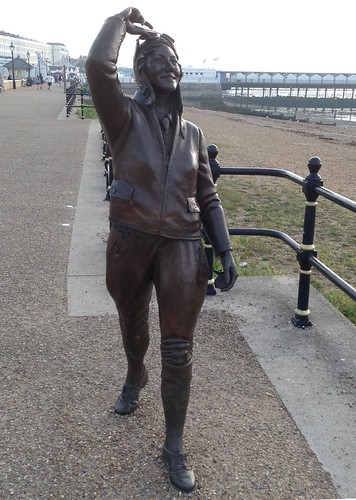 Amy Johnson is one of those names known the world over for her achievements in aviation, being the first woman to fly solo halfway around the world from England to Australia in 1930. This amongst numerous other flying achievements made her one of the most influential women of the 1900s.

She was born in 1903, at 154 St. George’s Road in Kingston upon Hull, in the East Riding of Yorkshire. The eldest daughter of John William Johnson and Amy Hodge, she was the oldest of four sisters. Her education took her through Boulevard Municipal Secondary School and on to the University in Sheffield, where she studied economics at degree level, before moving to London to start a new life after a failed relationship.

One Sunday afternoon while she was away from her office work, Amy travelled to Stag Lane Aerodrome in North London, where she was immediately captivated and enthralled by the aircraft she saw. Amy was determined she was going to fly, and even though flying was the preserve of the rich and famous, she persevered using money supplied by her father. She gained a number of certificates including a ground mechanics qualification and an aviator’s certificate before going on to gain her pilots “A” Licence, on 6th July 1929.

Ignoring the ridicule she was targeted with by the media, Amy began to fly, taking solo flights to her home town and across the United Kingdom.

Amy’s biggest challenge came when she decided to fly solo to Australia. Plotting the most direct route from England, she would cross some of the world’s most inhospitable landscapes, meaning she would have to be airborne for many hours at a time, with no accurate weather reports or radio contact with the ground. Fuel would be supplied en-route, and it was therefore imperative that she made each stop on time in order to achieve her goal. Before long, the ridicule stopped and the media began to take serious notice of what she was doing. They began to praise her, call her “Wonderful” and compare her to Charles Lindbergh.

On May 24th 1930, she finally touched down in her second-hand de Havilland DH.60 Gipsy Moth, an aircraft she had called ‘Jason‘. She landed in Australia, in a time that was sadly outside of the previous record set by the Australian aviator Bert Hinkler in 1928. Nevertheless Amy was still an aviation heroine, and was welcomed and revered across the world.

Now Amy really had the bug, and flying would become a series of challenges, each as daring as the last. A year later in 1931, she would fly with her mechanic and friend, Jack Humphreys, to Tokyo. Together they would set a new record from Moscow to Japan. Amy then fell in love with another pioneering aviator, Jim Mollison, in 1932, a relationship that bonded two like-minded people with a common interest, and they began many journeys flying together. But Amy, still determined to achieve great things, also continued with her solo efforts.

She set another record flying from London to Cape Town in 1933, and then flew across the Atlantic with her husband, being given a tumultuous reception in America. Amy and Jim then took part in the MacRobertson Air Race, a gruelling air race that took competitors from Great Britain across the world to Australia. Sadly, part way across, engine trouble forced the couple to retire from the race, much to their frustration. In 1936, just  six years after achieving her pilots licence, Amy undertook her last record-breaking flight when she flew from England to South Africa setting yet another new world record.

In the years before the Second World War, Amy turned away from record-breaking flights and began her own business ventures. She carried out modelling projects using her good looks and personality to model clothes by Elsa Schiaparelli, the Italian fashion designer, another prominent and influential woman of the inter-war years. But flying was never far from her heart and with the outbreak of war, both the draw to serve her country and to fly, were too much, and she joined the Air Transport Auxiliary service In 1940.

Ferrying aircraft around the country, Amy dutifully carried out this work until January 5th 1941. On this day she was asked to take an Airspeed Oxford from Blackpool to RAF Kidlington, in Oxfordshire.

Sadly, Amy and her passenger never made their destination. For some reason Amy was flying way off course, over the east coast of England rather than down the west coast or across central England, bot more direct routes. Over the North Sea, a few miles off-shore of Herne Bay, an aircraft was heard, and a parachute was seen falling from the snowy sky. A ship, HMS Haslemere raced toward the downed crew but even after frantic searches, neither of them could be found. The commander of HMS Haslemere, Lt. Cmdr. Walter Fletcher, himself dived into the icy waters to search for survivors, but he couldn’t locate anyone, and sadly perished as a result of the extremely cold water. For his bravery and determination he was posthumously awarded the Albert Medal, an award given for extreme acts of gallantry, and the highest honour until the introduction of the George Cross in 1940.

Shortly after, personal items belonging to Amy along with parts of her aircraft were washed up on the nearby shores, strengthening the argument that it was indeed Amy’s aircraft that had come down.  However, why she was flying where she was, and how she died, both remained a mystery, as does the whereabouts of her Airspeed Oxford aircraft.

Conspiracy theories were not slow in forthcoming. Ranging from secret missions to a victim of friendly fire, secret agents and covert operations were all banded about. Sailors on board HMS Haslemere believe she was sucked into the spinning propellers of the ship, a claim that is certainly plausible but not as yet substantiated. The exact cause why she was so far off course and what caused her aircraft to crash has never been satisfactorily identified and continues to remain a mystery to this day.

A vast number of plaques, buildings and statues have been dedicated in Amy’s honour, Schools and public buildings have been named after her, even aircraft have been called ‘Amy Johnson’ after the intrepid flyer. Her portrait has been displayed on tail fins and her home town of Hull have dedicated a number of structures and buildings to her, and the corridors of educational establishments resonate to the sound of her name.

In Herne Bay, a life-size bronze stature was erected and unveiled jointly by HRH Prince Michael of Kent and Tracey Curtis-Taylor (a modern-day aviator herself embroiled in media attention) on 17th September 2016 to mark the 75th anniversary of Amy’s untimely death. A bronze statue, it was designed by Stephen Melton, and sponsored by a number of local and national businesses.

Nearby to the statue is a wooden bi-plane bench, also as a commemorative feature not only to Amy Johnson but all those who served in the Air Transport Auxiliary Service during the war.

There has been much written about Amy Johnson’s life, her achievements and the records she set. She was indeed a remarkable woman, one whose determination proved that dreams can come true, and one whose dramatic life was tragically taken away from her at such a young age. She achieved many, many great things and is a superb role model to all, especially to women and aviators alike.

The Amy Johnson Arts Trust has a wealth of information about Amy and her links to aviation. Their website is worth visiting.