In Part 2, we left with the winter of 1942-43 arriving along with a special visitor.

The harsh winter of 1943-44 would see a special visitor come to Sculthorpe. Wing Commander Leonard Cheshire arrived to discuss, with Pickard, the plausibility of dropping food and clothing to his brother in Sagan (Salag Luft III) using the Mosquito. Cheshire knowing Pickard’s vast experience, thought he was the ideal person to speak to. Whether this was a personal effort to provide comfort to his brother or whether Cheshire was considering the Mosquito for low level precision attacks is not known, but the latter befell the Wing not long after Cheshire’s visit.

The December of 1943 would bring major changes here at Sculthorpe. On New Year’s Eve, the Wing, along with Pickard and all three Mosquito squadrons, would leave the Norfolk site, taking their Mosquito VIs to RAF Hunsdon. A much smaller airfield, where the overcrowding experienced at Sculthorpe must have been considerably worse. It was from Hunsdon that Pickard would famously make his last flight.

A story goes that Pickard had left his dog ‘Ming’ at Sculthorpe to be looked after whilst he was away. On the day he was shot down, 18th February 1944, on the Amien raid, the dog fell gravely ill. Pickard’s wife, Dorothy, went to get him and sensed that Pickard had been killed after seeing the state of the animal. It took months for Ming to recover, and some years later whilst living in Rhodesia, Ming went outside, looked up to the sky as he always did when Pickard was flying, heard a whistle, collapsed and died.*2

The departure of the Wing effectively left Sculthorpe with no operational units, until on January 6th 1944, when a new and very different squadron began to move in.

Crews from 214 (Federated Malay States) Squadron based under 3 Group at Downham Market, arrived in two waves, the initial group coming across in early January 1944, whilst the main body continued  operations flying their Stirling bombers. Those that arrived here quickly settled in, but a lack of decent paths meant that initial training was mixed with the unenviable task of digging and laying of new paths. Whilst attending lectures and link training were the primary tasks for the pilots and Flight Engineers, the gunners and other aircrew were given the more ‘practical’ task of constructing the new paths ready for the remainder of the squadron’s arrival.

Then on the 25th, the remaining crews and staff of the squadron departed Downham Market, thus ending their link with 3 Group. Once here, flying circuits and more lectures became the order of the day. Additional training on ‘Monica‘ equipment, fighter affiliation tasks and local cross countries then took the squadron to late spring at which point operations began to take place.

The arrival of 214 Sqn heralded more than just a new bomber squadron though, for they would not be flying the Stirling as they had been; instead, they were set up as part of 100 Group, becoming an official member in mid January 1944. Their arrival here would not only see them change Groups but would also see them convert to the American built B-17 ‘Flying Fortress’.

Now designated 214 (BS) Sqn,  214 Sqn’s  arrival would bring a major change to Sculthorpe, a change that would continue for the next five months. Operating in the Electronic Warfare role within 100 Group, they would carry out radio jamming operations, an early form of Electronic Counter Measures (ECM). The urgency of the conversion, led to the unit taking on fourteen UK based B17-Fs , their ordered ‘G’ models being used as a trade off*3.

The British B-17 (designated Fortress I, II and III) crews were joined by personnel from various U.S. units. Their role was to train and support the air and ground crews in both flying and maintaining the new aircraft, a role they performed well, right into the early summer of 1944. The set up was so successful that American personnel were soon posted in to fly alongside the RAF crews, thus expanding the influence of the Group. 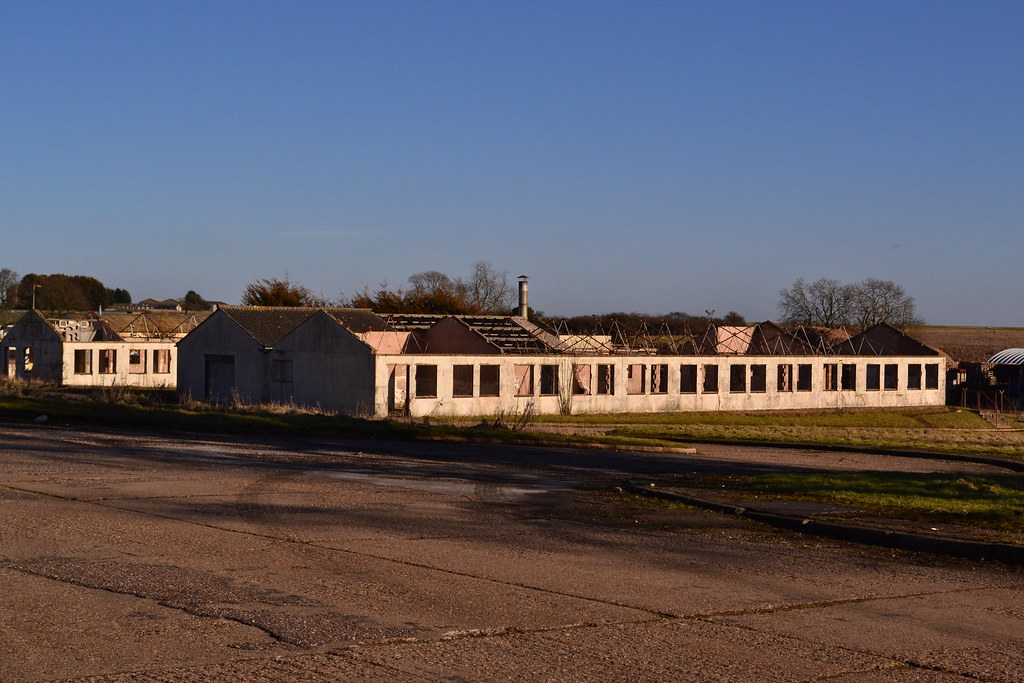 A large part of Sculthorpe has been left to rot, piece by piece.

Flying along side other bomber formations, 214 squadron would use systems including ‘Monica‘ to track or jam enemy radar, they performed ‘spoof’ missions to entice enemy fighters up to them rather than the main force that was attacking targets elsewhere; a rouse that worked well initially. Other operations flown by the Group, included: jamming or swamping German radio communications, jamming navigation aids and searching for new signals that may suggest new or improved German radar.*3

The successes of 100 Group, prompted the setting up of the U.S. 803rd (Prov) BS (H) in March that year, a US Group who would learn from and perform in the same role as 214 Sqn. Initially taking six veteran crews, all having reached 25 missions, from 96th BG at Snetterton Heath combined with those already at Sculthorpe, they would soon build up to a strength of twelve aircraft all based here at the Norfolk airfield.

Of these initial six all but one were fitted with Carpet and Mandrel jamming equipment, whilst the sixth (B-17G) had jammers and search equipment in the form of SCR-587 and Hallicrafters S-27 VHF signals intelligence receivers (SIGINT) to track Luftwaffe radar and radio transmissions.*5

The initial set up of the unit was seen as ‘messy’ and disorganised with no real focus. This led to delays in preparation, organisation and training. As D-day appeared over the horizon, the U.S. group was distinctly lacking in preparation and action was needed fast.

To assist in the training and operations of the Fortress, a new separate unit was also set up here at Sculthorpe. From April 24th 1944, 1699 (Fortress Training) Flight who operated each of the Fortress I, II and III, carried out the conversion and training role for these crews, and to speed the process up, they also used the B-24 Liberator along with some smaller examples such as the Avro Anson and Air Speed Oxford.

Then, five months after their arrival, both 214 Sqn and the 803rd were both posted out to RAF Oulton, (May 1944), where they continued with their ECM roles. The 803rd, now commanded by Lieutenant Colonel Clayton Scott, began to work on the support of Operation Overlord, and even as late as June 5th, equipment was still being fitted to the aircraft.

The Fortress Training Flight moved with the two ECM units and in October it was disbanded and immediately reformed as 1699 (Bomber Support) Conversion Unit, a designation it used for a year before being renamed once more.

The departure of the three squadrons (along with the resident non-flying units) was not a coincidence, for Sculthorpe had been earmarked for redevelopment into a Very Heavy Bomber base (VHB). As soon as the personnel had moved out, workmen moved in, taking up residence in the now empty nissen huts. 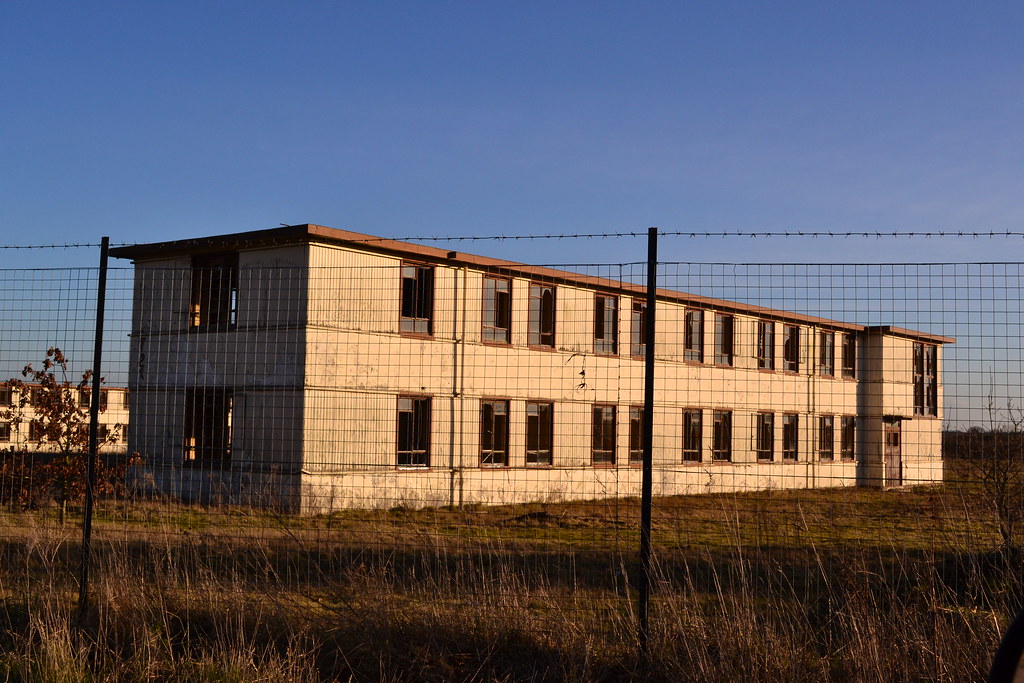 There then followed a period of sustained redevelopment. This included the removal and reinstatement of longer runways along with the construction of twelve very heavy bomber hardstands. Surrounding public roads were also diverted and further properties were demolished to make way for the airfield’s new expansion. The driving force behind this move was the anticipated deployment of the enormous Boeing B-29 “Superfortress”, but when the war in Europe came to an end a year later, further development of Sculthorpe ceased and the B-29s never arrived as permanent residents.

For the next 3 years or so, the station was basically closed, it was placed into care and maintenance with only occasional use keeping it alive; one such operator being the 1510 Beam Approach Beacon System Flight (BABS) based at nearby Bircham Newton. However, four years after the war’s end, between May and August of 1949, the airfield got a reprieve, when the 344th BS, 98th BG, USAAF did bring B-29s to Sculthorpe for the first of a number of several 90 day deployments. The first of these temporary postings were in response to the growing Soviet aggression in Eastern Europe. Identified as one of only a few sites suitable for the heavy bomber, the reprieve led to further development of the site with new storage facilities being constructed. The focus of these buildings were specifically to house and prepare atomic bombs ready for use should Anglo-Soviet relations deteriorate to a war status.

In Part 4, as the Cold War warms up, Sculthorpe becomes a major player in the front line of a potential European war.

The full history can be seen in Trail 21.