Carrying on from Part 1, we see a new Station Commander appointed. His determination to lead by example though, led to an ‘unfortunate incident’ which prevented his arrival here at this Norfolk site. We also see how West Raynham aircraft took part in attacks on the German fleet and a new heavy bomber arrives for trails.

It was also at this time that a new station commander was appointed, Acting Group Captain Basil Embry, whose career to date had been varied and long. He had served in the RAF for 20 years already, in locations that included Turkey, the Middle East, the Far East and the UK. Embry led by example, taking his squadron into daring battles over Norway much against the ideals and wishes of those who were higher up in the chain of command. The move to put him in charge at West Raynham was considered an attempt to restrict his flying ambitions forcing him to keep his feet firmly on the ground. A move that Embry didn’t appreciate. 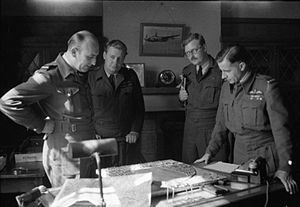 On the day of his appointment, he had one last flight, and took both his crews and a new Commanding Officer, Wing Commander L.R. Stokes into battle. However, his luck was to run out, and on leaving the target near St. Omer, his aircraft was shot down. The air gunner was killed in the attack, but Embry, along with his navigator, managed to bale out. What happened next was a dramatic series of events that led to Embry attempting to escape three times finally being successful on the last attempt. After making his way across France to Spain, he then made his way back to England where he took up active service once more.

Embry was highlighted as a possible leader for the new Pathfinder Group, but he  was overlooked by Arthur Harris in favour of Donald Bennett. However, this did not inhibit Embry’s career, for he reached the heights of Air Chief Marshal and a service record with the RAF that extended long after the war had ended.

However, the incident meant that Embry never made it to West Raynham, his absence being briefly filled by the arrival of 139 Sqn. As the personnel were settling in, they were greeted with the news that their own Commanding Officer, Wing Commander Louis W. Dickens, was to be awarded the DFC for his action in leading nine Blenheims in an attack in which they faced heavy Luftwaffe opposition. The entire Squadron, apart from a ‘skeleton staff’, were all given eight days leave following the announcement.

Shortly after, and as was with many other units who found themselves here, 139 Sqn were soon ordered out of West Raynham once more, and by early June all squadron personnel had departed, neither Embry nor 139 Sqn had experienced much of this expanding Norfolk airfield.

The pattern of sort stay squadrons would continue on, and June would see yet another one, that of 18 Sqn, who on arrival, made their headquarters in No. 2 Hangar at the airfield. Classed as a medium bomber squadron it would have the ‘standard complement of personnel’ split into two flights. Another Blenheim unit, they quickly took up operations flying over Germany and the low countries, attacking targets in northern Germany, France and Belgium. These initial operations were regularly hampered by poor weather though, and many of the aircraft had to regularly return early due to fog, heavy cloud or rain. On the better days, when attacks were successful, sorties took them over Holland and Northern France attacking airfields and barges moored along the coast.

The squadron was soon transferred out of West Raynham though, and by early  September, 101 Sqn was once again the only operational flying unit at the airfield.

At this point, it was decided to redevelop the airfield with new hardstands being constructed around the perimeter track. The process would last well into 1941 before it was completed, but it would allow aircraft to be parked and maintained on hard surfaces rather than grass where manoeuvring must have proven difficult over the previous poor winter months.

The new year brought a new tactic to 2 Group. With fighter flights failing to bring the Luftwaffe up to engage, it was decided to send the light bombers of 2 Group to entice them up. These ‘Circus‘ operations were designed to bring enemy fighters up so the escorting Spitfires and Hurricanes could engage with them.  Primarily as bait, this new tactic would be the main focus for the Group for the remainder of the year.

Then in April 1941, another new major operation was mounted and it would be 101 Sqn who would be the first to take part.

Officially known as ‘Channel Stop’, the idea was to prevent enemy shipping from using the English Channel, the vital link between the North Sea and Baltic bases and the wide open expanses of the Atlantic Ocean. Aircraft transferred across to RAF Manston in Kent, where they would be kept on alert to attack at a moments notice. Their targets being any enemy shipping seen attempting to traverse the narrow stretch of water between England and France. These attacks would be carried out during daylight hours, and backed up at night by Motor Torpedo Boats (MTB) from the Royal Navy. The first of the 101 Sqn Blenheims assigned to the role, flew from West Raynham to Manston during April, and on the 28th, their first targets were spotted. Over the next few days, a number of ships were attacked with mixed results, a 2,000 tonne vessel being one of the more prized examples that fell to the Blenheims.

But by the 9th May, aircraft losses had mounted significantly, and so the remaining six aircraft of the flight were sent back home and a temporary stop was put to the operation. It was at this point, that the now outdated Blenheim would finally be replaced with the Wellington, a new aircraft with its unique geodesic design was now appearing at the Norfolk site.

The month of May also saw the return of 90 Sqn, a unit that had been resident here at the outbreak of war with their Blenheims. This time they were not bringing twin engined models with them though, this time it was the Fortress I the mighty US four engined heavy, the B-17.

90 Squadron were trialling the use of the bomber, and whilst based at West Raynham, they also operated from RAF Great Massingham and RAF Bodney in an attempt to see if these grass airfields were suitable for the Fortress. However, it was quickly realised that such an operation with these models was not feasible and so they departed a month later, transferring out to RAF Polebrook, in Northamptonshire. Further tests revealed problems with the B-17’s guns at high altitude, the cold causing many to freeze and become inoperable. Within four months of arriving, the B-17s were sent packing, their use as an RAF bomber having been rejected.

In Part 3 we see more activity at West Raynham, and a daring raid by Blenheims in which no less than fifteen medals were awarded for action. We also see a return to attacks on the German fleet, an attack that would be met with very heavy resistance.