From Sculthorpe in Trail 21, we travel a few miles south, just a stone’s throw to its sister station and another of Britain’s post-war relics. This site, closed as late as 1994, was then sold for housing development and light industrial use. With its founding in 1938, it was a long standing and also important post-war airfield, one that saw many units and aircraft types adorn its runways and buildings. In my last visit, the site was closed off and under development, so today we revisit the airfield and see what has become of it since then. As the gates are now open, we delve once more into the history of the former RAF West Raynham.

West Raynham lies in the heart of Norfolk, west of the village that gave it its name, and five miles south-west of Fakenham. The entire site covers some 158 acres, and encompasses around 37,000 sq metres of buildings.

As a classic expansion period airfield (using garden city principles with squares and tree-lined avenues), it was built during the period 1937-39. As was common at that time, it had a number of neo-Georgian buildings, notably the Officers Mess and unmarried Officers’ quarters – the larger examples even having servants’ quarters built within. Airfields of this period had to pass a severe scrutiny from both early environmental and planning groups, and so were built with aesthetics, rather than functionality, in mind. The restrictions placed on new developments meant that these pre-war stations were far more ‘ornate’ in design than their wartime counterparts. 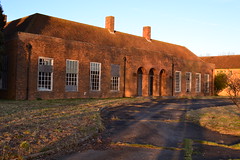 The classic Officers’ mess, a neo-Georgian style building built with aesthetics in mind (2015).

Construction of the airfield was initially undertaken by the Allot Ltd company. It had two grass runways both of which were replaced later in May 1943 by hard  concrete and tarmac examples. The longest of these runways at 2,000 yds, lay north-east to south-west and the shorter at 1,400 yds directly east to west.

During its initial construction, four ‘C’ Type hangars were erected, two of which were allocated to the Ministry of Aircraft Production (MAP).  These hangars, were a mid 1930’s design which used reinforced concrete, and were commonly found on pre-war airfields, thus their dominating appearance became well known on the British landscape at that time. In close proximity to the hangars stood the Watch Office (with Fort) – another 1930’s design (built to drawing 207/36) it also utilised concrete as it was strong and in abundance at this time. Also found close by were the gunnery/training dome, a range of technical stores, workshops and numerous ancillary buildings as was common to airfields of this pre-war period. 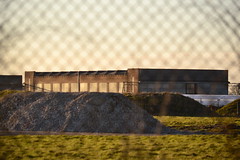 One of the four hangars (2015). The newly installed solar panels can just be seen where the runways would have been.

The perimeter track was built with thirty-six heavy bomber design hardstands, and the accommodation area (which being non-dispersed was located on the airfield site) could house around 2,000 personnel. Following later developments the number of hardstands  were increased as was the accommodation area. At its peak, West Raynham could house around 3,000 personnel.

The site officially opened in May 1939, just prior to the outbreak of war, under the control of No. 2 (Bombing) Group whose headquarters had by now moved to RAF Wyton. Formed on March 20th 1936, the group was made up of five Wings: 70 (Upper Heyford), 79 (Watton), 81 (here at West Raynham), 82 (Wyton) and 83 (Wattisham). As a parent airfield West Raynham would use nearby Great Massingham as a satellite, with relief landing grounds at both Bircham Newton and North Pickenham. To deter marauding Luftwaffe bombers in the area, two decoy sites would also be used, one at Fulmodestone and the other at Gateley.

In May 1939, the first two squadrons arrived at West Raynham. Transferring across from Bicester were 101 Squadron and 90 Sqn, both flying with the twin engined Bristol Blenheim IV. On arrival though, it was found that the airfield was far from ready, and only with personnel carrying out the remaining work, did it finally become operational three days later.

The two squadrons soon took part in long distance flights over France. Inter mixed with these were tactical training exercises, with 101 Sqn acting as the enemy attacking ‘distant’ targets, these being ‘protected’ by other units. By August though, the situation on the continent had deteriorated considerably, and war seemed inevitable. As a result, and shortly after being sent to 5 A.T.S. Penrhos for training, both squadrons were quickly recalled to West Raynham and preparations began for war.

On 2nd September, mobilisation orders came through instructing the units to ‘Scatter’ aircraft. This national scheme was implemented to spread aircraft around alternative airfields, thus ‘thinning them out’ in case of an attack. Both units used a variety of airfields including: Bircham Newton, Brize Norton, Weston-on-the-Green and later Upwood, sending small groups of aircraft to each site.

In both units, staff vacancies were quickly filled with new recruits, and whilst both squadrons remained as training squadrons, they were nonetheless brought up to a war footing. Then in the middle of September, 90 Sqn were stood down once more, now awaiting official transfer from 2 Group to the 6 Group Training Pool.  Transferring out of West Raynham to their new home at Upwood, they left 101 Sqn the only active unit here.

101 Sqn was at the time led by Wing Commander J.H. Hargroves, who presided over twenty-two officers and 207 airmen. Between them, they would fly twenty-one Blenheim aircraft divided into two flights – ‘A’ and ‘B’.

In preparation for flights over France, the aircraft were given the Air Ministry (squadron) letter ‘N’. After being fitted with long range drop tanks, they had their engines boosted to provide the greater take off power needed for the additional weight they would now carry.

For the next three months though little happened, Britain had now entered the Phoney War. Initially alerts and false alarms came through thick and fast, crews being ready to respond at a moments notice.  However, nothing came of these alarms, and so the squadron was repeatedly ‘stood down’ from action. At Christmas, with no immediate threat pending, it was decided to grant four days leave to the majority of the squadron personnel, with many off site visiting family, the airfield all but shut down.

January 1940 brought little change, and even though still classed as a training unit, 101 Sqn remained at the ready to respond to action. To make the lull in action even worse, the cold weather now worsened and snow began to fall across the country. What training flights that were occurring were now hampered by the bad weather and cold winter air.  On several days West Raynham was classed as ‘unserviceable’, snow and a frozen surface preventing aircraft from taking off or landing. The poor weather lasted well into March with only sporadic flying taking place. With such poor conditions and inexperienced crews, training flights would ultimately result in some accidents,  the handful that did occur soon culminating in fatalities.

During this time it was decided to set up a new unit to take on the training role that 101 Sqn were currently performing. This would allow 101 to officially become an ‘operational’ squadron. To this end, 2 Group Target Towing Flight  (2 TTF) was formed  here at West Raynham, operating the Fairey Battle, Gloster Gladiator and the Avro Tutor. The relief to 101 Squadron however, would not be felt for some time, and it would be the middle of the year before they would be ready to take on the might of the Luftwaffe.

On the 7th, March 1940, a break in the weather allowed a number of crews from 101 Sqn to take part in an air firing exercise at Wainfleet Sands, but for one of those crews things would go very badly wrong. 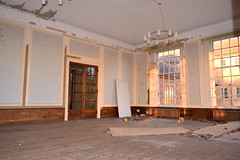 The Officer’s Mess in rather a sorry state. It is earmark for redevelopment (2015).

The Blenheim IV, ‘N.6165’ piloted by F.O. F.C Mottram with A/Sgt. A.E. Maudsley and Cpl. R. Hartland on board, crashed at Botesdale near to Diss. The pilot and observer were both killed in the accident whilst the wireless operator escaped with injuries. A second aircraft, a Fairey Battle also from 101 Squadron, also ran into difficulties that day. More fortunately for the crew of this aircraft though, it managed a forced landing with no further problems nor injuries to those on board.

During April another new training squadron was formed here at West Raynham, that of 76 Sqn, which was supposed to fly the Hampden. After being disbanded earlier that month at Upper Heyford, any thoughts of longevity were soon dismissed, when before any real organisation could take place, and for whatever reason, the squadron was disbanded once more. Its life at West Raynham lasting just four weeks.

As the weather improved so training flights gradually picked up again for those based at this Norfolk airfield, and by May operational sweeps over the North Sea had begun, with reconnaissance flights out looking for enemy shipping. But still 101 squadron failed to see any major action and so flights became routine.

By May 1940 the skies of southern England were beginning to hot up. With attacks on airfields signifying the start of the Luftwaffe’s campaign to destroy the RAF, West Raynham would not be immune.

Although these attacks were mainly targeted at airfields in the south, West Raynham would be visited on no less than twelve different occasions, the first of which was on 25th. Whilst little damage was done to the airfield, the war had nonetheless been brought home to those who were stationed here, it had become incredibly real at last.

In Part 2 a new Station Commander is due to arrive, but his determination to led by example leads to an ‘unfortunate incident’ meaning his arrival at West Raynham is prevented from happening. We also see attacks on the German Fleet and a new, heavy bomber arrives for trials.