On a recent visit to Houghton Hall in Norfolk, I came across a small church in the grounds, which held a number of graves belonging to those who had lived in the nearby village.

It turns out that Sqn. Ldr. Good was a Canadian, killed whilst undertaking an Air Sea Rescue (ASR) mission on 13th November 1943, whilst flying in a Vickers Warwick.

The Warwick was a Vickers Armstrong aircraft, issued to the squadron in October 1943. The aircraft was originally intended to be a bomber, built to meet specification B.1/35 it would be the largest twin-engined aircraft to serve during World War 2. It had a striking resemblance to the Wellington, utilising Barnes Wallis’s geodetic design. Models operating in the ASR role were capable of carrying Lindholme rescue gear and/or droppable lifeboats.

On 13th November 1943, three crews were briefed at Thornaby and ordered out to perform a search and rescue operation for a missing aircrew. Sqn. Ldr. Good departed at 16:40 and headed toward the Dutch coast where it was thought the aircraft had come down. After searching the area, nothing was seen and so the three aircraft began their return leg to RAF Thornaby across the North Sea.

On approaching the British coastline, the weather deteriorated significantly and the aircraft entered a thunderstorm. Two of the aircraft including Sqn. Ldr. Good’s Warwick (BV336) were struck by lightning, suffering damage to electronic equipment and loss of the radio. Severe turbulence and icing then caused further problems, making the Warwick difficult to control. Over land the weather failed to improve and control of the aircraft appears to have been lost by Sqn. Ldr. Good.

With no communication with the ground, the Warwick then entered a spin diving onto the ground at an area known as Sleights Moor, near Whitby in Yorkshire. There were no survivors.

The crew of Warwick BV336 were:

The second Warwick struck by lightning also entered a dive, but he pilot of this aircraft managed to regain control and return to Thornaby without further problems.

Although flying with the Canadian Air Force, Sqn. Ldr. Good was the Son of Nickolai Andreyev and Nina Andreyevna. After hod father died, his mother married Joseph Good (husband of Elaine Blair Good). The family eventually left Russia emigrating to Canada living in Montreal after becoming naturalised Canadians in 1922. After studying in both Canada and the US, Edgar then joined the RAF obtaining his wings in 1937. He was then sent to RAF Bircham Newton, where he would later return to and 280 Sqn.

The inscription on his headstone reads:

All that you hoped for, all you had, you gave to save mankind…”
Air Sea Rescue Service.

He is buried in Houghton (St. Martin) Churchyard (Houghton Hall). 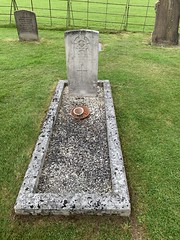 The grave of Squadron Leader, Good.