After Bircham entered the war in Part 4, and new innovative designs helped to save lives at sea, Bircham continues on and heads towards the war’s end. Numerous squadrons have now passed through this Norfolk airfield, and many more will come. Once the war is over, Bircham enters the wind down, its future uncertain, but on the horizon a saviour is coming and Bircham may well be saved by an unusual guardian.

By 1942, designs in ASR equipment had moved on, and a jettisonable lifeboat had by now been designed. The Hudsons at Bircham were the first unit to have the necessary modifications made to them to enable them to carry such boats, and as a result several crews were saved by the aircraft of 279 Sqn. Many searches however, were not fruitful and lives continued to be lost as a result of the lack of suitable equipment and poor weather.

Moments later, an airborne lifeboat is parachuted down by a Hudson of No. 279 Squadron to the crew. (© IWM C 3691)

During the year yet more front line squadrons would arrive here at Bircham. The first, 502 Sqn brought with it a change of aircraft type, with the Whitley V. The Whitley was a 1930’s design, constructed to Specification B.3/34, and was only one of three front line bombers in service at the outbreak of the war.

Within a matter of weeks, one of these Whitleys, returned from a maritime night patrol, overshot the flare path and crash landed. This particular mark of Whitley was soon replaced by the VII, and as 502 received their new models, so they began their departure to St.Eval; they had only been here at Bircham for a mere month.

March and April 1942 would then see two more units, both operating Hudsons. The first, 407 Sqn, was the first Canadian unit to be based here at Bircham, and would only stay here until October. As part of 16 Group, it would perform attacks on enemy shipping between Heligoland and the Bay of Biscay. The second squadron, 320 Sqn, would arrive at Bircham a month later on April 21st and would remain here for the next year. An entirely Dutch manned unit they had transferred from Leuchars in Scotland where they had been carrying out maritime patrols. The main part of April for 320 Sqn would consist of ferry flights, tests and cross country flying.

The final squadron, 521 (Meteorological) Sqn, was formed here on 22nd July 1942 through the joining of 1401 and 1403 (Met) Flights. These were operating a number of aircraft including the Blenheim IV, Gladiator II, Spitfire V, Mosquito IV and Hudson IIIA, and all passed over to 521 Sqn in the July on its formation. In the following year, March 1943, the squadron would be split again, returning back to two flights once more, Nos 1401 and 1409, thus ending this period of its history. The role of 521 sqn was meteorological, the Gladiators flying locally usually above base, whilst the remainder flew long range sorties over northern Germany or to altitudes the Gladiator could not reach.

There was little ‘front line’ movement in or out of Bircham during 1943, only two new squadrons would be seen here, 695 Sqn with various types of aircraft, and 415 (Torpedo Bomber) Sqn another Canadian unit.

415 were initially a torpedo squadron operating in the North Sea and English Channel areas attacking shipping along the Dutch coast. They arrived here at Bircham Newton in November with both Albacores and Wellingtons, and remained here in this role until July 1944 when they left for East Moor and Bomber Command. During D-day the squadron lay down a smoke screen for the allied advance, taking on the Halifax to join in Bomber Command operations. Throughout their stay they retained detachments at a number of airfields including: Docking and North Coates (Wellingtons) and Manston, Thorney Island and Winkleigh (Albacores). They were well and truly spread out! 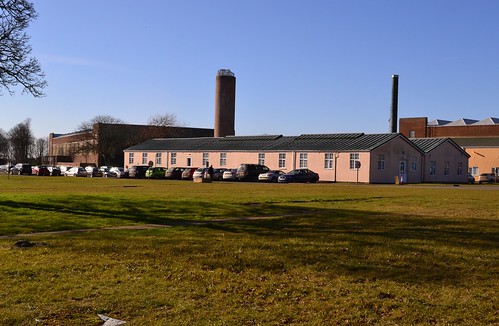 The main stores with two of the C-type hangars in the background.

The only RAF squadron to appear here at Bircham Newton in 1944, was 524 Sqn. It was originally formed at Oban on the Scottish West coast with the failed Martinet, in October 1943, the squadron lasted a mere two months before being disbanded in the early days of December.

Like a phoenix though, it would be reborn later in April 1944 at Davidstow Moor. By the time it reached Bircham in the July, it was operating the Wellington XIII. After moving to nearby RAF Langham in October,  it would eventually disband for the final time in  1945.

As the war drew to a close, 1945 would see the winding down of operations and squadrons. Two units would see their days end at Bircham, 598 Sqn with various types of aircraft and 119 Sqn with the Fairey Swordfish, would both be disbanded – in April and May respectfully.

Bircham’s activity then began to dwindle, and its role as a major airfield lessened. From anti-shipping activities to Fighter Command,  Flying Training, Transport Command and finally to a Technical Training unit, Bircham was now training the Officers of the future. Flying activity naturally reduced, and small trainers such as the Chipmunk became the order of the day. Whilst a number of recruits passed through here, the most notable was perhaps HRH The Duke of Edinburgh, who made several landings here as part of his flying training in the early 1950s.

Like all RAF Stations, Bircham was the proud owner of several ‘gate guardians’, notably at this time was Spitfire LF Mk.Vb Spitfire ‘EP120’ from around 1955 to late 1962, along with Vampire F MK.3 ‘VF272’.

Spitfire EP120, was a Castle Bromwich model, which entered RAF service in May 1942, with 45 Maintenance Unit (MU) at Kinloss in Scotland. Whilst serving with several squadrons she achieved seven confirmed ‘kills’ before being relegated to a ground instructional air frame. There then followed a period of ‘Gate Guardianship’ standing at the front of several stations including Bircham Newton. In 1967 she was used as a static example in the famous Battle of Britain movie, before being transferred back to gate guard duties. In 1989 she was then transferred to a storage facility at St. Athan along with several other Spitfires awaiting their fate. Finally she was bought by the ‘Fighter Collection‘ in 1993. After a two year restoration, EP120 finally returned to the skies once more, in September 1995 where she has performed displays around the country ever since. 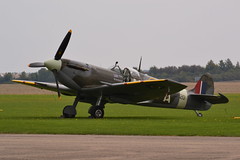 Unfortunately, Vampire VF272 wasn’t so lucky. Whilst her fate is unknown at this time, it is believed she was scrapped on site when Bircham finally closed in 1962.

But it was not to be the end of the story though. In 1965, with the development of the Kestrel, Hawker Siddeley’s VTOL baby, Bircham came to life once more, albeit briefly, with the sound of the jet engine. With tests of the new aircraft being carried out, Bircham Newton once again hung on by its finger nails – if only temporarily.

A year later, Bircham was sold to the National Construction College and the pathways were adorned with young building apprentices, diggers and cranes of varying sizes. Being a busy building college, many of the original buildings have been restored but the runways, flying areas and sadly the watch office, removed. Whilst private, the airfield retains that particular feel associated with a wartime airfield.

Luckily, the main road passes through the centre of Bircham. A memorial project has been set up to remember those that served at the airfield with photos and exhibits from days long gone. A memorial has also been erected and stands outside the original Station Commanders house, just off the main road and is well sign posted. The original accommodation blocks, technical buildings and supporting blocks are still visible even from the road. The 1923 guard-house, is now a shop and the operations block, the reception centre.

Reputedly haunted, the squash courts (built-in 1918) continue to serve their original purpose, and most significantly, the three large C-type hangers and two Bellman sheds are still there – again all visible from the public highway.

RAF Bircham Newton, stands as a well-preserved model one of Britain’s wartime airfields. Although private now, the buildings reflect the once bustling activities of this busy centre of aviation.

In February 2020, the CITB announced that they had sold the site to the Bury St Edmunds based West Suffolk College. The move, it says, was planned as a cost cutting exercise with the loss of some 800 jobs. The intention of the West Suffolk College is to continue with the construction training at Bircham, hopefully preserving this incredibly historic site for generations to come. Only time will tell.

*1A detailed history of the production of the HP.15 /1500 can be found on Tony Wilkin’s blog ‘Defence of the Realm‘.

*4 Pitchfork, G, “Shot down and in the Drink” 2007, Published by The National Archives. – A very interesting and useful book about the development of the ASR service along with true stories of airmen who had crashed in the sea.

Details of 206 Sqn fatalities are available on the 206 Sqn Coastal Command website.

Details of Great Bircham war cemetery graves are available at the role of honour of St Mary’s Church.

The memorial project at RAF Bircham Newton has a website and can be found here.