On the night of September 8/9th 1943,  a force of 257 aircraft comprising 119 Wellingtons, 112 Stirlings, 16 Mosquitoes and 10 Halifaxes took off from various bases around the U.K. to bomb the Nazi gun positions at Boulogne. Included in this force were aircraft from the RAF’s Operational Training Units, and for the first time of the war, five B-17s flown by US aircrews of the USAAF’s 422nd BS, 305th BG at Grafton Underwood. This was the first of eight such missions to test the feasibility of the USAAF carrying out night operations over Europe.  After the remaining seven missions, in which the squadron had dropped 68 tons of bombs, the idea was scrapped, the concept considered ‘uneconomical’ although the aircraft themselves proved to be more than capable of the operations. 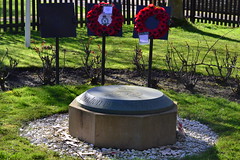 The Gun battery targeted, was the emplacement that housed the Germans’ long-range guns, and the target wold be marked by Oboe Mosquitoes. With good weather and clear visibility, navigation was excellent, allowing the main force to successfully drop their bombs in the target area causing several huge explosions. However, not many fires were seen burning and the mission was not recorded as a success. Reports subsequently showed that the emplacement was undamaged due to both inaccurate marking by Pathfinders, and bombing by the main force. However, as both anti-aircraft fire and night fighter activity were light, no aircraft were lost during the flight making it a rather an uneventful night.

However, the mission was not all plain sailing, and whilst all crews returned, the night was marred by some very tragic events.

Three Stirlings were to take off from their various bases that night: at 21:00 hrs from Chedburgh, Stirling MK. III, EF136, piloted by F/S. R. Bunce of 620 Sqn; at 21:30, another Stirling MK.III, from 75 Sqn at RAF Mepal, BK809 ‘JN-T*1‘ piloted by F/O I.R.Menzies of the RNZAF; and lastly at 21:58 also from Chedburgh, Stirling MK. I, R9288 ‘BU-Q’ piloted by N.J. Tutt  of 214 Sqn.  Unfortunately all three aircraft were to suffer the same and uncanny fate, swinging violently on take off. The first EF136 crashed almost immediately, the second BK809 struck a fuel bowser, and the third R9288 ended up in the bomb dump. Miraculously in both the Chedburgh incidents there were no casualties at all, all fourteen crew men surviving what must have been one of their luckiest escapes of the war! The same cannot be said for the second though.

Stirling BK809 was part of a seventeen strong force of 75 Sqn aircraft. Each aircraft was carrying its full load made up of 1,000lb and 500lb bombs. As the Stirling was running along the runway, it swung violently, striking a fuel bowser which sent it careering into houses bordering the edge of the airfield.

Mrs Randall managed to get out, her legs injured, whereupon she was met by a local fireman, Mr. A.E. Kirby of the National Fire Service. Mr. Kirby went on to help search in the wreckage of the house until his attempts were thwarted by another explosion. His body, along with that of Mr. Randall, was found the next day.

Two other people were also killed that night trying to provide assistance, those being F/Sgt Peter Gerald Dobson, RNZAF and Section Officer Joan Marjorie Easton WAAF. F/Sgt. Dobson was later mentioned in despatches. Three members of the crew lost their lives as a result of the accident, F/O. Menzies and F/O. N. Gale both died in the actual crash whilst Sgt. A. Mellor died later from injuries sustained in the accident.

A number of others were injured in the crash and one further member of the squadron, Cpl Terence Henry King B.E.M, was awarded the British Empire Medal “for his bravery that night in giving assistance“.

The mission on the night of September 8/9th 1943 will not go down as one of the most remarkable, even though  it was unique in many respects, but it will be remembered for the sad loss of crews, serving officers and civilians alike in what was a very tragic and sad event.

The crew of Stirling BK809 were:

RAF Mepal was visited in Trail 11.

Further details of this accident, the crews and those involved can be found on the 75 (NZ) Sqn blog. This includes the gravestones of those killed and a newspaper report of the event.

My thanks also go to Neil Bright for the initial  information.