In Part 2 we saw how Bircham had grown following the immediate post war cutbacks, and how France was seen as a threat. Now as developments occur in Germany, the dynamics of Europe begin to change and we enter the Expansion Period of the late 1930s.

In the 1930s, the Government’s plans for expansion took a new direction when Germany too began to build up its armed forces – albeit surreptitiously at first. New expansion schemes were put in place, which not only signified the expansion of the RAF’s forces, but the number of available airfields, their design, and the number of their associated buildings as well.

One of these modifications was the construction of a standard watch office with attached tower. Designed as drawing 1959/34, it became the standard design used for all Watch Offices of this time, and was in essence a square building with a small observation tower built onto a flat roof. In addition to this, Bircham also had new barrack blocks (2357/36) built, now in the familiar ‘H’ shape, supplementing the previous models which were in the form of a ‘T’. These new buildings had reinforced roofs giving better protection to those inside should it be struck by small incendiaries.

The decade started off on a bad foot however, with the loss of a 207 Sqn aircraft, a Fairey IIIF on January 21st 1930. A previous resident of Bircham, the rear party had brought the last of the personnel to Bircham in November 1929. The next weeks were spent getting as many airmen flying solo on the Fairey IIIFs as possible. However, poor visibility due to fog that day, caused the aircraft ‘J9637’ to crash into an orchard near Sudbury in Suffolk killing both crewmen: F.O. Donald Mackenzie (aged 25) and Cpl. Leonard Edward Barnard who was a year younger. 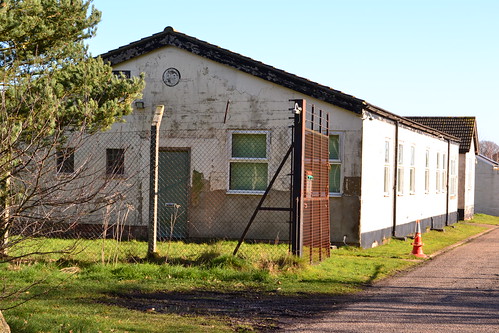 One of the former technical buildings no longer used.

In November 1935 information was received at Bircham that two new squadrons were to be formed here, 21 Sqn and 34 Sqn, both bomber units flying Hawker Hinds. Personnel began arriving on December 3rd and began to work on 207 Sqn’s  updated Fairey Gordons, preparing them for dispatch to Cardington prior to their move abroad once more. 21 Sqn were allocated Hangar No. 17, and would receive their first Hind (K.4638) on New Years Eve 1935.

34 Sqn on the other hand, wouldn’t receive their first batch of Hinds until January 1936, when four examples were delivered from the Hawker Aircraft Company Ltd. at Brooklands, by pilots from other units. With two more Hinds being delivered on June 11th, also by pilots of other units, the cadre would soon be preparing to move. On July 30th, both 21 and 34 cadres were ordered north, making the move from Bircham Newton to Abbotsinch in Scotland.

The latter part of the decade reflected previous events at Bircham. Many new changes meant that events at the airfield were as dynamic as ever. Several new squadrons were formed resulting in new crews and some new aircraft. Sharing the space at Bircham were 18 Sqn (Harts and Hinds), 49 Sqn (formed from ‘C’ Flight of 18 Sqn) and ending the decade 206 Sqn with Ansons and later Hudsons. 206 would themselves later be used to form 220 Sqn, which in turn would see ‘C’ Flight be renamed as 269 Sqn. Many of these new squadrons would in turn depart Bircham as changes occurred on the continent.

With 206 came new changes of command at Bircham. Their arrival in 1936, saw a move to Coastal Command (16 Group). Formed at Manston in June under the initial command of Sqn. Ldr. A. H. Love, 23 (Training) Group, 206 Sqn had three flights of six aircraft each and a further six Ansons in reserve. The squadron transferred across to Bircham at the end of July by which time the command had been taken over by Wing Commander F.J. Vincent D.F.C.

206’s main role at this point was training pilots selected for Flying Boats and the  Blenheim squadrons of Coastal Command. Shortly after arrival, the unit’s command would pass over to Wing Commander H. Long D.S.O., and by June 1937, 270 pilots would have been successfully converted in 2,700 hours of flying time.

Naturally accidents did occur during this time, on November 9th 1936, 220 Sqn Anson ‘K6199’ stalled after take-off killing P.O. Peter White (age 23) and injuring three others: Sqn. Ldr. William M. M. Hurley (the pilot), AC.2 Eric D. Butler and AC.1 Reginald K. Birtwistle. The aircraft was written off, after which a court of enquiry recommended modifications to locking bars, as it appeared that the pre-flight checks had been made with the control systems locked. The aircraft was left as an instructional air frame and a stark reminder for proper pre-flight checks!*7

A second accident occurred a year later in September 1937, when another 220 Sqn Anson, ‘K6227’ also stalled, this time falling into the sea near Conway. This time, the crew were not so lucky, with all three, a Sergeant, an AC.1 and an AC.2 all being killed. Their average age was just 22 years old. 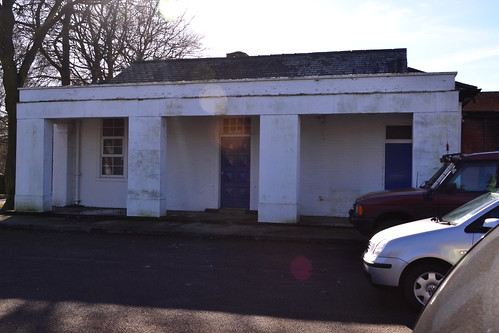 The former Guard House now stands as a shop.

During the later years of the 1930s, a royal visitor was often seen parked in the hangars at Bircham Newton. The Airspeed Envoy G-AEXX of the King’s Flight was a regular here, being so close to Sandringham House, the Royal residency, it was an ideal location for the aircraft. The Envoy was a creation of the Airspeed company, headed by the author Nevil Shute, a former de Havilland and Vickers employee who later set up his own business, Airspeed Limited. The Envoy was later developed into the Airspeed Oxford which became one of the main trainers used by the RAF.

As the era closed and just weeks before the outbreak of war, another squadron arrived here at Bircham in the form of 42 Sqn with Vickers Vildebeests. The Vildebeest was a late 1920s design biplane, designed to meet Specification 25/25 which required an aircraft operating in the Coastal Defence role and capable of both day bombing and ant-shipping torpedo operations. Several marks were manufactured, up to and including the MK.IV of which only 18 were built. It was some of these that were later delivered to 42 Sqn at Bircham Newton. These aircraft remained in service at Bircham until April 1940, when they were replaced by Beauforts at which point, 42 Sqn departed Bircham transferring to Thorney Island in West Sussex.

On the day war was declared, another very mobile squadron appeared at the door of Bircham, this time it was the Blenheims of 90 Sqn who made a very brief appearance here from West Raynham. Over a period of just two weeks they would locate at five different RAF stations!

With the introduction of the last of the Expansion Schemes ‘L’ and ‘M’ over the years 1938 -39, Bircham would see yet more changes to its infrastructure, notably the demolition of the repair sheds and their replacement with three Type ‘C’ hangars. At this point a fourth was also proposed such was the size and nature of activity at Bircham Newton. In addition, the two original Belfast type hangars were retained providing a mass of hangar space on the airfield. Another bonus for Bircham was the addition of further accommodation blocks, providing better accommodation for the many new air and ground crews who were increasingly appearing at this Norfolk site.

Teetering on the bring of war, Bircham was now operational, more modern aircraft are filtering through and Coastal Command operations begin in earnest. In Part 4, Bircham Newton enters the war.