In Part 1, we saw how Graveley had been formed, its early years and the how it was drawn into Don Bennett’s Pathfinder Group. We saw the Introduction of FIDO and the benefits of this incredible fog busting system.

In this, the second and final part we see more uses of FIDO, new aircraft and new squadrons arrive, but we start on the night of 18th/19th November 1942 which saw a remarkable turn of fortune for a squadron who had suffered some devastating losses.

Halifax DT488 (TL-S) piloted by Wing Commander B.V. Robinson, caught fire when flares in the bomb bay ignited. He ordered the crew to bail out, but as the last man left, the fire extinguished itself. Robinson then decided to try and nurse the damaged bomber home. Flying single-handed, he reached the safety of RAF Colerne in Wiltshire, where he survived a crash landing. The six crew members who had bailed out also survived but were unfortunately captured and taken as prisoners of war by the Germans.  As a result of his actions, Robinson was awarded a Bar to add to his DSO. Robinson would go on to have a second lucky escape later on, after which, in May 1943, he would become the Station Commander of his home base here at Graveley.

35 Sqn would continue to carry out missions both marking and attacking strategic targets deep in the heart of Germany, but accuracy, whilst improving, was not yet 100%.

By the end of 1942 the new H2S ground scanning radar system was being introduced, and a small number of 35 Sqn aircraft were fitted with the units. The continuing missions were on the whole successful, even after the Germans developed a device able to track aircraft using it, and eventually, the whole of the PFF were fitted with it.

In April 1943, a detachment of 97 Sqn Lancasters arrived at Graveley. Based at the parent station RAF Bourn, they also had detachments at Gransden Lodge and Oakington, and they remained here for a year. After that, they moved on to RAF Coningsby in Lincolnshire.

A number of major operations were undertaken by 35 Sqn over the coming months, but with it came the end of good fortune for Group Captain Robinson. Fate was finally to catch up with him, and he was lost on the night of 23rd/24th August 1943. Flying in a Halifax II (HR928) ‘TL-R’, his loss that night brought a further blow to the men of Graveley and 35 Sqn. Following this, Air Chief Marshal Sir Arthur Harris restricted flying operations by base Commanders as the number of these experienced men being lost was quickly becoming unsustainable.

On November 18th/19th 1943, Bomber Command began the first phase of its ‘Battle for Berlin’, and Graveley’s Pathfinders would find FIDO more than beneficial. A raid of some 266 aircraft would see light losses on the second night of operations, but on returning to England, crews would find many of their bases shrouded in heavy fog. With visibility down to as little as 100 yards on the ground, the order was given to light up FIDO. This would be FIDO’s first official wartime use, and whilst some of Graveley’s bombers were diverted elsewhere, four managed to land safely using the system. This new invention may well have saved precious lives, as others failed to survive landing at their own fog-bound bases. At debriefing, one airmen, was noted as saying he could see Graveley’s fire as he crossed the English coast, a considerable distance from where he was now safely stood.

The night of 16th/17th December of 1943 would go down as one of the worst for Bomber Command and in  particular for the Pathfinders who were all based in the area around Graveley.

In what was to become known as ‘Black Thursday’ a massed formation of almost 500 aircraft attacked targets in Berlin, and although covered in cloud, marking was reasonably accurate and bombs struck their intended targets. On return however, England was fog bound, thick fog with a layer of heavy cloud prevented the ground from being seen. Whilst not operational that night, Graveley lit up its FIDO in an attempt to guide fuel starved bombers in. With little hope for even getting in safely here, crew after crew requested landing permission in a desperate attempt to get down. Many, out of fuel, bailed out leaving their aircraft to simply fall from the night sky. Others, desperate for a landing spot, simply crashed into the ground with the expected disastrous results. At Graveley, several attempts were made by desperate crews, but even FIDO was unable to help everyone. One aircraft came in cross wind losing vital power as he realised his error and tried to pull away. Another crashed a few miles away to  the north-east and a third aircraft trying to land came down to the south-east of the airfield. Of all those lost around Graveley that night, survivors could be counted on only one hand. 97 Squadron at Bourn, Gravely’s sister Pathfinder station, had taken the brunt with seven aircraft being lost. The role call the next morning was decimated.

The new year brought new changes to Graveley. Mosquito B.IVs arrived with a newly formed 692 Squadron (RAF). Their first mission here would be on the night of February 1st/2nd 1944 in which a single aircraft would defiantly attack Berlin.

Armourers wheel a 4,000-lb HC bomb into a Mosquito. The Mosquitoes were fitted with bulged bomb-bays in order to accommodate ‘Cookies’. The tower can be seen behind. (IWM)

Some of these 692 Sqn Mosquitoes were later modified to carry the enormous 4,000 lb ‘Cookie’ bomb, This was first used by S/Ldr. Watts in Mosquito DZ647 who took off at 20.45 hours to attack Düsseldorf. The attack took place on  the night of 23rd/24th February 1944 from a height of 25,000 feet. The initial bomb was followed by two further bombs from Mosquitoes of the same squadron, DZ534 and DZ637.

The first casualties for 692 Sqn were reported only three days earlier, on the night of 19th/20th February, which also proved to be the worst night for Bomber Command casualties since the war started – even worse than ‘Black Thursday’. With 79 aircraft failing to return home, the RAF had taken another pounding and squadrons were finding themselves short of crews. These casualties including those in Mosquito DZ612 ‘P3-N’. Flown by F/L. W. Thomas (DFC) and F/L. J. Munby (DFC) the aircraft took off at 01:05 to attack Berlin. The Mosquito was subsequently shot down and both crew members killed.

35 Sqn, who were still flying their Halifaxes, suffered even worse. TL-J, TL-B, TL-N, and TL-O, all fell to the accurate guns of night fighters over the continent. In yet another devastating night of losses, neighbouring Warboys, Wyton and distant Leeming and Waterbeach all lost crews. The casualty list was so high, that barely a squadron operating that night didn’t suffer a loss.

In early April 1944, a small detachment of 571 Sqn Mosquitoes (RAF Downham Market) joined 692 passing through on their way to RAF Oakington. From there that then transferred to  RAF Warboys, where the squadron was eventually disbanded. A series of events not untypical for Graveley.

692 would go on to have another claim to fame a year later, when on January 1st 1945, in an attempt to assist in the Ardennes offensive, they attacked supply lines through a tunnel. A daring attempt it required the bomb to be dropped into the mouth of the tunnel where it would explode. These attacks were carried out between 100 and 250 feet using the ‘Cookies’ and were so successful that smoke was seen bellowing from the other end of the tunnel after the attack.

The final 692 Sqn mission would then be on the night of May 2nd/3rd 1945. As the war was coming to a close, it was feared that remaining resolute Germans would make their escape from Keil, and so 23 aircraft in 2 waves of 12 and 11 went sent to bomb the coastal town. A successful mission, all crews returned safely.

692 Squadron, would operate a variety of Mosquito types during its life including the B.IV, XIV and XVI who would prove to be highly successful and instrumental in 8 Group’s ‘Light Night Striking Force’.

692 Sqn would move to Gransden Lodge in June 1945 where they were finally disbanded; a sad end to a remarkable career. The squadron had performed well since arriving here at Graveley, and had seen many highly regarded crew members lost in operations, including both Sqn. Ldr. R. Fitzgerald and Wing Commander A. Cranswick; its record of prestige losses reflecting the nature and danger of flying as part of the elite Pathfinder Force. 35 Sqn meanwhile would go on to have a long and established career, operating as late as 1982. 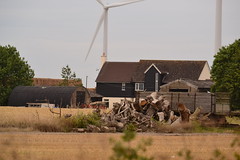 The remaining buildings utilised by the farm, which no longer resembles the Control Tower it was.

Other units to grace the skies over Graveley would include detachments of 97, 115 and 227  Sqns all with Lancasters MK. I and MK.IIIs, mainly prior to thier disbandment toward the war’s end.

692 Squadron carried out 310 operations from Graveley losing 17 Mosquitoes in all. A  total of 150 aircraft were registered either missing or crashed following operations from this station: 83 Halifaxes, 32 Lancasters and 35 Mosquitoes.

As one of the many Pathfinder stations in this part of the country, Graveley is linked by the long ‘Pathfinder Walk’ a path that leads all the way to RAF Warboys in the north. Using this walk allows you to visit a number of these bases linking each one by open cross-country footpaths.

Today, Graveley is all but gone. The control tower is now very well disguised as a farm-house, its shape considerably different to the original design, the concrete huts have been pulled down and the runways mainly dug-up. A couple of buildings do still remain next to the farm-house, storing a range of modern farm equipment. The perimeter track considerably smaller in width, remains used by the local farm for lorries to transport their goods to the main road. 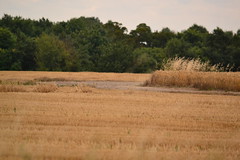 The perimeter track where bombers once lumbered.

Graveley is typical of the sad end to many of Britain’s lost airfields. The wide open expanses that once resounded with the roar of piston engines taking brave young men to war, are now quiet and the sounds mere whispers in the wind. Lorries roll where the wheels of laden bombers once lumbered. The brave acts of those young men now laid to rest in a small stone overlooking where they once walked. As a pivotal station in 8 Group, Graveley and its crews deserve a much greater recognition for their dedication, bravery and sacrifice.

This aside, a beautiful stained glass window can be found in the local Graveley church and is worthy of a visit if time allows.

After the quiet of Graveley we head south-east, toward our next planned destination, RAF Bourn. On the way, we make a brief stop at the now extinct RAF Caxton Gibbet, a little airfield with a colourful history.

10 thoughts on “RAF Graveley and the Pathfinders (Part 2).”