On July 2nd 1919 at 01:42, airship R.34 lifted off from the airfield at East Fortune, east of Edinburgh, to make an epic voyage – the first crossing of the Atlantic Ocean east to west by a powered aircraft.

Conceived as early as 1916, R.34 was built at the works of William Beardmore and Co. Ltd. of Inchinnan near Glasgow. At 634 feet in length with a top speed of 62 mph, she would have five 270 hp Sunbeam ‘Maori’ engines, and would cost £350,000 to build. Her massive size gave her an impressive 1,950,000 cubic feet for gas storage, and she would be equivalent in size to a Dreadnought battleship. A major step forward in airship design, her aerodynamic shape reduced total air resistance to that of just 7% of an equivalently sized flat disc.

As she was designed under war specifications, R.34 would be built to carry twenty 100 lb and four 550 lb bombs, a range of Pom-Pom guns, Lewis machine guns and a small number of two-pounder quick-firing guns; but as she wasn’t finished until after the war, none of these were ever fitted, nor was she ever flown in anger.

Completed in early 1919, she just missed out on achieving the record of the first Atlantic crossing, being laid up by damage caused by poor handling, and thus beaten to the record now held by Alcock and Brown.

In May, she arrived at East Fortune airfield, a major airship station in East Lothian, from where she carried out a number of test flights including an endurance flight across the Scandinavian countries. In July she was set to make the first  Atlantic crossing, east to west.

In preparation for the flight, eight engineers were sent to the United States to train ground crews in the safe handling of the airship. The Admiralty provided two  warships, the Renown and Tiger, as surface supply vessels, and should R.34 have got into difficulty, she could have been taken in tow by one, or both of the two vessels.

On the evening of 1st July 1919 the ship was fueled to capacity (some 6,000 gallons), and in the early hours of the morning she was moved out of her shed and prepared for the flight. Her captain, Major G. H. Scott, gave the order to release early, and at 1.42 am (GMT) R.34 lifted slowly in to the Scottish sky.

After battling strong winds and Atlantic storms, R.34 finally arrived at Mineola. Huge crowds had turned out to greet her and her crew, a grandstand had been erected, parks and public spaces were packed with onlookers. Major J. Pritchard (The Special Duties Officer) put on a parachute and jumped from the airship to become the first man to arrive in America by air. He helped organise ground staff and prepared the way for R.34 to safely dock. As she settled on her moorings, she had not only become the fist aircraft to fly the Atlantic East to West, but broke the current endurance record previously held by the North Sea Airship NS 11, also based at East Fortune.

A record was made, R.34 had put British Airship designs and East Fortune firmly on the map. After 108 hours and 12 minutes flying time, R.34, her crew and two stowaways: William Ballantyne and a small tabby kitten called “Whoopsie”, had landed at Mineola, Long Island, New York.

After a 3 day stay in which the crew were treated like the heroes they were, R.34 was prepared for the homeward journey. On Wednesday July 10th 1919, at 23:54 she lifted off and set sail for home.

With prevailing winds carrying her eastward, she made an astonishing 90 mph, giving the opportunity to cut some of the engines and preserve fuel. This gave the crew a chance to divert over London, but due to a mechanical breakdown, this was cancelled and R.34 continued on her original route. Poor weather at East Fortune meant that she was ordered to divert to Pulham Air Station, Norfolk, but even after clarification that the weather had improved, her return to East Fortune was denied and she had to continue to Pulham – much to the disgust of the crew on board. At Pulham, the reception was quiet, RAF personnel greeted her and secured her moorings. She has covered almost 7,500 miles at an average speed of 43 mph.

Eventually after a major refit at East Fortune, R.34 left for the return to Pulham. After six weeks of static mooring, R.34 was sent to Yorkshire, to Howden Airship Station. Here she was used to train American crews, was modified for mast mooring and used for general training duties. During one such training mission, she was badly damaged in strong winds, and after sustaining further damage whilst trying to moor and secure her, she began to buckle. Falling to the ground, she broke up and was damaged beyond repair. R.34 was then stripped of all useful materials and the remainder of her enormous structure sold for scrap – a rather ungainly ending to an incredible and historical machine. 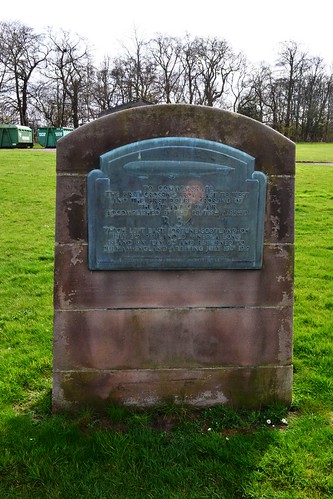 The memorial stone at East Fortune airfield commemorating the epic flight of R.34.

The Flight Crew for the Atlantic journey were: