In Part 2, a number of twin engined models frequented Leuchars performing anti shipping roles and U Boat hunts out in the North Sea. BOAC had begun its clandestine role and shipping ball-bearings back from neutral Sweden. We now see a change to these flights and as the war ends, a new much larger breed begin to appear here are Leuchars.

Throughout all these changes at Leuchars, the BOAC company had been continually running its clandestine operations to Sweden. But by now it was clear that a new, faster more agile aircraft was needed. Even though they were marked with civilian markings and flown by Swedish crews, the Electras were slow and cumbersome and made easy targets for both fighters and flak. Now, with the development of the Mosquito, the opportunity had finally arrived.

It was during December 1942 that the first civilian operated model of the aircraft arrived here at Leuchars. A Mosquito PR.IV ‘DZ411’,  it was assigned the civilian registration G-AGFV, and would begin flights to Stockholm on 4th February 1943, after which it was joined by six other aircraft. These MK.VIs were given the sequential registrations G-AGGC to GH, and would arrive during the April and May of that year.

By the end of April the following year, a total of nine Mosquitoes would have been modified and delivered to BOAC at Leuchars*5.

All these aircraft had to be changed from military status to civilian, this required the removal of all traces of armament. Modified at Hatfield – the home of the Mosquito – the resultant weight loss altered the aircraft’s centre of gravity and so additional ballast had to be added to prevent changes in the aircraft’s flying characteristics.

It was vital that the Mosquitoes remained unarmed for these operations, so as to not infringe or violate Sweden’s wartime neutrality, however, this made any aircraft on this run a potential ‘sitting duck’, even though, like their Lockheed predecessors, they carried BOAC insignia and were flown by civilian aircrew.

These operations were by now carrying more than just mail and ball-bearings though. These covert operations, took the civilian marked and unarmed Mosquito across the North Sea to Sweden, where it would drop off the mail, papers and other written material held within its bomb bay, and return with prominent scientists, special agents or allied aircrew who had been interned in Sweden as well as vital ball-bearings produced by the Swedes. The faster and far more agile Mosquito would, in most cases, be able to out run any opposing Luftwaffe fighter that should, and indeed did, try to intercept the aircraft whilst on one of these flights.

The returning ‘passenger’ on these flights had the unfortunate prospect of having to sit in a modified ventral bay for the whole duration of the flight. The prospect of further internment probably outweighing that of cramp and three hours of discomfort.

One such notable passenger who was carried back from Sweden, was the nuclear physicist Niels Bohr, whose work on atomic structures and quantum theory, had won him the Nobel Prize for Physics in 1922.*4 He would go on to work on the Atom Bomb in the Manhattan Project, the results of which were seen at both Hiroshima and Nagasaki in 1945.

Even though these flights were highly successful, a few aircraft were lost. In Mid August 1944, G-AGKP ‘LR296’, a former 27 MU aircraft, was lost when it crashed into the sea nine miles from Leuchars. All three on board were killed as it approached on return from Stockholm; the passenger being a BOAC Mosquito pilot himself. The crash was believed to have been caused by a structural failure, the aircraft having been repaired previously after an accident in January. By the war’s end fourteen Mosquitoes had been used in some way by BOAC, five of which crashed.*6

As the war moved on, squadron numbers at Leuchars begin to diminish. 1943 brought only two, that of 235 Sqn and 333 (Royal Norwegian Air Force) Sqn who were formed here on April 5th as ‘B’ Flight after the dividing and renumbering of 1477 (Norwegian) Flight. This was a split unit, one part flying the Catalina from Woodhaven, whilst ‘B’ Flight flew the Mosquito MK.II. An upgrade to the MK.VI then saw the unit move to join the famous Banff Strike Wing in September 1944. Whilst at Leuchars they operated as sub-hunters and convoy escorts, whilst ‘A’ flight flew more clandestine operations smuggling secret agents and supplies into occupied Norway. The Mosquito as a multi-function aircraft performed well in these duties, and by the end of the war numerous U-boats had been attacked by aircraft based at the Scottish airfield. 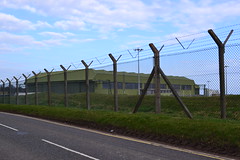 One of the Hangars at Leuchars 2018

With 1944 dawning and major events happening on the continent, more changes would take place at Leuchars.

In the early months, proposals to extend and widen one of the runways was put forward, a part of which was agreed in April. This move also required the relocation of the Watch Office and widening of the perimeter tracks. A further three squadrons would pass through this year beginning with a detachment of 281 Sqn, who stayed for a year from February. A second unit 206 Sqn, stayed here for less than three weeks. But then September/October would bring a new and interesting model in the shape of the B-24 Liberator and 547 Sqn. A change to the smaller twin-engined models that had frequented Leuchars for the last four years or so, the move here was unfortunately a signal of their ending though, the squadron being disbanded in June 1945 never to appear again.

Whilst here, the Liberators would patrol the Norwegian coast in the A/U (anti-U boat) role, many of these patrols being uneventful, the U-boat threat by now greatly reduced compared to its previous Atlantic successes. However, on October 12th, Liberator MK.VI “G” did spot a U boat on the surface which it attacked with both front and rear turrets. Strikes from both guns were seen on and around the conning tower, and it was initially thought that the sub was sunk. After patrolling for a further 45 minutes, the U boat was again sighted some two miles away, but managed to escape in the poor weather. It was believed by the crew to have been a 740 ton vessel which had subsequently suffered damage from the attack.

The B-24s of the these RAF squadrons would be complemented by B-24s now flying separate runs to Sweden by the Americans. In addition to these, Leuchars also saw the reintroduction of the popular and highly successful American built Douglas DC3. The route to Stockholm now being a little less dangerous than it had been in previous years.

The arrival of the Liberator had signified a big change in direction for Leuchars,  they were to be the first of many four engined heavies to serve from the Fife base.

In 1945, 519 Sqn brought along the Halifax III, but sadly they were to go the way of 547 Sqn and disband here at Leuchars in the following May; it too would not reappear in the RAF’s inventory of operational Squadrons. 519 were a meteorological unit, collecting data for flying operations. Using both the Spitfire VII and Halifax IIIs, they would climb to altitudes of around 40,000 ft, and collect valuable meteorological data. Using Prata I, Prata II and Recipe I (Pressure And Temperature Ascent) many of these flights would take the aircraft high out over the North Sea.

With the close of the war, Leuchars had seen no less than twenty-eight operational squadrons pass through its doors, some of these merely staying for a day, whilst others were more prolonged. A range of aircraft had come and gone, mainly twin-engined models operating in the photographic reconnaissance or anti-shipping role. With its position on the north eastern coast, Leuchars had proven vital to maritime operations protecting the seas between Britain and Scandinavia, an area it had operated in, in a number of clandestine roles. But with the war now at an end, these were no longer required, and Leuchars’ role would again revert back to its original one – that of training.

The post war world was very different to the pre-war one, Britain like many other countries was rapidly trying to revert to pre-war budgets. A reduction in the armed forces was seen as essential to cutting costs, whilst rebuilding the nations cities that had been so heavily bombed in the Blitz, was paramount. As a result, the RAF as with the other forces, were having to do with what they had. A reduction in man power and machinery though would not only mean a reduction in squadrons, but the airfields that used them.

Leuchars, like so many, was now under the potential threat of closure. However, the increasing post war tensions between the east and west created the Cold War, with a strained and anxious stand off between Soviet and Western forces right across the European frontier. As had happened before, Leuchars’ position would once again be its saviour. Over the coming years it would see a wealth of operational aircraft and a broad range of front line fighters be based in this small corner of Scotland,

The coming months after the war’s end would see further four-engined models reappear, a previous resident 203 Sqn who had been here in the 1920s, returned from overseas operations in May 1946, bringing back with them the B-24 (Liberator VIII). Within two months though, this would be replaced by the Lancaster GR.3, a version of the mighty four-engined heavy that had wreaked so much devastation across Germany’s industrial cities. But by 1947, 203’s link with the Scottish airfield would finally draw to a close, and the squadron would depart for good.

160 Sqn who arrived a month later in June, also brought the Liberator, and similarly began taking on the Lancaster GR.3. By October though their demise had also arrived, they were renumbered and reformed as 120 Sqn, and by 1947 they had lost the last of their Liberators retaining only the Lancaster.

In December 1950, 120 Sqn were posted to Kinloss, where its wartime bombers were replaced with the newer Avro model, the long range maritime patrol aircraft, the Shackleton with its rare contra-rotating props.

The aircraft, built in response to the growing Soviet threat, was designed around the Lancaster,  Roy Chadwick’s dream bomber. Chadwick, like R.J. Mitchell, having sadly died before their dream had finally been put into service. Built to Air Ministry Specification R 5/46, the Shackleton was initially designed with gun turrets and two Rolls-Royce Griffon 57A engines inboard, and two Roll-Royce Griffon 57 engines outboard.

One other unit arrived here at Leuchars that year, that of 82 Sqn, initially as a Lancaster detachment and then in June 1947 as a base with its own detachments at Eastleigh, Dar-es-Salaam and Lusaka. The last of the prop driven aircraft were now making their ultimate RAF appearances, and soon Leuchars would enter in the jet age.

In Part 4 Leuchars enters the jet age. The Cold War begins and Leuchars takes on a new challenge as it moves to a new Command, that of Fighter Command.

The full story of Leuchars can be seen on Trail 62.