After Part 1 in which we saw how Leuchars came about and develop as we moved towards the Second World War, we enter the early 1940s. Here we now see anti shipping sorties, U boat hunts and a strange relationship spawn between the recently formed civilian organisation BOAC and RAF Leuchars.

Immediately after the declaration of war, searches began with flights penetrating out over the North Sea. On the September 4th, a Hudson of 224 Sqn spotted a Dornier 18. The Dornier attacked the Hudson which sustained damage in both the fuselage and fuel tank. Thankfully, the pilot evaded further damage and manged to nurse the aircraft back home to Leuchars without further problems. Leuchars’ position on the eastern coast provided an ideal opportunity for such flights, hunting for bombers, U-boats and ships over the North Sea; it was this operation perhaps that marked the beginning of these maritime searches- a role it would carry out for the next 5 years. 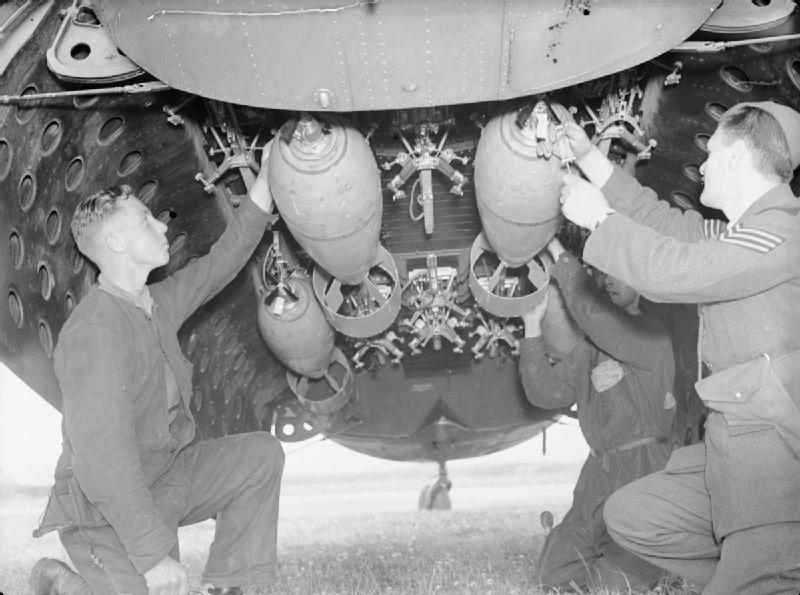 Armourers secure 250lb bombs in the bomb-bay of a Lockheed Hudson of No. 224 Squadron at RAF Leuchars. (public domain)

The two units at  Leuchars continued with repeated patrols, with 233 sighting  both enemy flying boats and a submarine on September 7th. Attacks were made on both but no signs of damage were reported to either. Sadly, on this day, a 224 Sqn Hudson was seen diving into the sea, no explanation was available as to the cause, and a launch was dispatched to search for survivors – sadly with no results. This rolling programme of patrols over the North Sea pretty much set the scene for the remainder of 1940, culminating in the departure of 233 Sqn in September, followed not long after by 224 Sqn on April 15th the following year.

At the base itself, more hangars were built, four (austerity) ‘C’ type hangars were added which expanded the servicing and maintenance area hugely. Leuchars was clearly expanding.

Leuchars like many of Britain’s airfields would not only operate ‘operational’ squadrons from them, but numerous support flights that would run along side. Some of these included: training flights, communications flights, Army support and co-operation flights, and Leuchars was no different. One such unit was that of  18 Group Communications Flight, who resided at Leuchars from the spring of 1940 right the way through to 1960. With only a brief spell at Turnhouse, it would operate a wide range of aircraft throughout its long service and be one of, if not the longest serving unit at the airfield.

The early part of 1940 saw yet another front line squadron arrive here at Leuchars, that of 605 Sqn with Hurricanes. The fighter squadron, whose battle honours would include The Battle of Britain and the Malta campaign,  would only stay for a very short period of time, transferring again at the end of the month to the rather unsuitable Wick, where only one Bessineau hangar existed and there were little or no dispersal facilities. As two other squadrons were also moving onto the airfield at the same time, it was decided to billet the non operational crews off the airfield site, an idea that became the norm in the following war years.

Over the next few years, there would be a plethora of squadrons use Leuchars. In October, 320 Sqn arrived in a move that saw the return of the Avro Anson. Within days of their arrival though the squadron would begin receiving the Hudson I. What makes this particular unit special was the fact that both it, and 321 Sqn with whom it would soon merge, were both formerly of the Royal Dutch Naval Air Service, and had arrived at Pembroke Dock in June that year after the Germans invaded Holland. They brought with them Fokker T VIII seaplanes which were quickly replaced with the Anson.

On January 18th 1941, the two units were merged to form 320 (Dutch) Sqn, whose headquarters were at Carew Cheriton under the command of Lieutenant Commander W. van Lier, at which point all but one of the Ansons were disposed of. For short time the unit would perform from both there and Silloth training crews on aerial photography in the Hudson, before returning here to Leuchars in the March, where upon they gradually updated the Hudsons with the MK.II, the MK.III and eventually the MK.IV before ending their link with Leuchars and departing to Bircham Newton in the April of 1942.

Another unusual squadron to arrive at Leuchars was that of 72 Sqn in November 1940. A Spitfire unit, they had then taken on the Gloster Gladiator, a 1934 designed bi-plane that became famous in the defence of Malta as ‘Faith‘, ‘Hope’, and ‘Charity‘. The switch to the bi-plane appears to have been made as a result of an unsuitable airfield at Acklington. However, and even though the Gladiator was in no way equal to the Spitfire, 72 Sqn retained the Gladiator well into the Spring of 1941, at which point they upgraded to the newer Spitfire, the IIa.

Arriving at Leuchars on November 29th, 1940, 72 Sqn immediately began flying patrols over the sea, their first being in the area around Dunbar. However, the Scottish winter weather dogged operational flying resulting in many cancelled flights and patrols. On December 8th, Green section led by P.O. Norfolk struck lucky, and the flight encountered a lone Luftwaffe Heinkel He.111 over Holy Island. The Spitfire engaged the Heinkel firing numerous shots at the enemy aircraft, but the bomber made his escape flying into the heavy cloud that blanketed the coastal skies. As a result, P.O. Norfolk was unable to make a claim against it. It was this very same bad weather that prevented the squadron’s proposed move back to Acklington, meaning that the planned trip for the 15th, was delayed, the aircraft unable to make the transfer until the end of the month.

The majority of 1941 saw similar moves; short stays by 86 Sqn (2nd February – 3rd March) with Blenheims; 42 Sqn (1st March – 18th June) with Beauforts on their way to the Far East; 107 Sqn (3rd March – 11th May) with Blenheims and 114 Sqn (13th May – 19th July) also with Blenheims, all of which brought a number of twin-engined models to the Scottish airfield. The primary role for these units was maritime patrols, monitoring and photographing vessels out over the cold waters of the North Sea.

In 1941 a strange relationship spawned between the recently formed British Overseas Airways Corporation (BOAC) and RAF Leuchars. BOAC – being formed by the amalgamation of British Airways Ltd and Imperial Airways – formed a partnership with Leuchars that would remain at the airfield up until the war’s end, operating in an ‘open’ but rather contradictory clandestine role.

The civilian company would initially operate a single Lockheed Model 14 Super Electra (the forerunner of the Hudson) named ‘Bashful Gertie‘, between Leuchars and Stockholm in neutral Sweden. Piloted by Swedish aircrew, the idea behind the route was to pass POW mail into Sweden where it could be forwarded to prison camps in occupied Europe. At the time though, Sweden was one of Europe’s largest producers of ball-bearings, a commodity that both the allied and axis powers needed in order to keep their war machine turning. It is now known that much of Germany’s war supply of ball-bearings was in fact coming from Sweden, but they were not the only country buying the Swedish goods. After dropping off the post, the Electra would be refuelled and filled with ball-bearings before returning to Leuchars. This run hence became known as the ‘ball-bearing run’. These operations would continue for several years from Leuchars, but upgrades at a later date, would see a new form take over from these rather slow and vulnerable aircraft.

On August 12th, another new squadron was formed here at Leuchars, that of 489 Sqn with Beauforts, who kept them until the January of 1942. At this point they began replacing them with the Blenheim IV. After departing to Thorney Island in March 1942, they returned here as a full squadron in October 1943. At this point they began receiving the Beaufighter X an aircraft they kept until the war’s end. Prior to D-day the squadron moved to RAF Langham in Norfolk where they donned invasion stripes ready for their part in the forthcoming invasion of Normandy*3.

A detachment of the Horsham-St-Faith based 105 Sqn, arrived at Leuchars in December 1941 bringing yet another twin-engined, but new design, to these Scottish shores. A revolution in aircraft design, it was the envy of the Luftwaffe and a joy for British pilots – the de Havilland Mosquito IV.

The detachment would stay here until after September 1942 whereupon it would reform as a complete unit at RAF Marham in Norfolk. In the last days of September however, four aircraft would leave Leuchars to attack a ‘special’ target in Oslo.

In Oslo on this day was a gathering of high level Nazi officials at the Gestapo headquarters, and this was to be the primary target for the four aircraft. After bombing successfully, they four sped away at low level toward the sea and home, only to be attacked, by four FW-190s. All four Mosquitoes received damage to varying degrees, and one was sadly lost, that flown by twenty-six year old Flt. Sgt. F. Carter and his navigator twenty-year old Sgt. Young. The Mosquito was seen heading toward the Oslo Fjord (Lake Engervann) with its starboard engine on fire. Unable to maintain height, the aircraft clipped trees and struck the water killing the two crew. The two bodies were successfully  pulled from the Fjord by local fishermen and buried in Oslo. The four crews had only been posted to Leuchars the day before.

Little changed throughout 1942. More short detachments and movements through Leuchars saw 217 Sqn, 415 Sqn, 455 (RAAF), 144 Sqn and 544 Sqn bringing mainly twin engined models to Leuchars. Only the detachment of 544 Sqn with Spitfires saw any major changes. The longest standing unit at this time was 144 Sqn with Hampdens, but they were spread far and wide, detachments being located at Skitten, Sumburgh, Wick, Afrikanda and Vaenga.

In October, a month after the departure of 105 Sqn, the Mosquito returned once more. This time a new unit, 540 Sqn, who were created from both ‘H’ and ‘L’ flights of 1 Photographic Reconnaissance Unit (PRU). The multiple flights of this former RAF Benson unit was divided up into five separate consecutive squadrons 540 – 544. Flying models that included:  Mosquito II ‘DD615’, IV ‘DZ592’, VIII ‘DZ424 and IX ‘LR422 they would also use the Spitfire IV up to the end of the year. Their role here was primarily to photograph targets in Norway and northern Europe, a role they performed until early February 1944. They would eventually return to their former home at RAF Benson leaving a year’s long stay at Leuchars behind.

In Part 3, the running of BOAC aircraft from Leuchars see a change, the war comes to a close and new larger aircraft begin to appear here at the Scottish base.

The full story of Leuchars can be seen on Trail 62.