In Part 2 we saw the first of the Canadian units form at Dishforth, still a new unit, they very quickly become part of the new 6 Group (RCAF).  As they began operations over occupied Europe, they quickly learnt that war brings casualties. We also see that Dishforth soon becomes ‘upgraded’ to a Standard ‘A’ specification airfield, and then the Canadians move out and a new training unit move in. The aircraft now get bigger.

The new year brought new changes both at Dishforth and within the RAF. Expansion of the force saw a new Group born, that of 6 (RCAF) Group, and after some four years of wrangling between the Canadians and the British, all but two of the Canadian squadrons, and their airfields, were transferred over to RAF control. The formation of the Group was with mixed emotions though, the Canadians having no control nor say over its operation, but still paying the bill for the squadrons for the duration of the war – a rather one sided agreement in the eyes of the Canadians. However, the expansion increased Squadron numbers, now some 37% of the RAF’s pilots were from the Dominion and of these, almost two-thirds were Canadian.

On January 1st 1943, 6 (RCAF) Group was therefore officially up and running, and it would be now that 426 Sqn would become operational.

Their start to the war began with an attack on the French port at Lorient on the night of 14th/15th January. 6 Group’s first attack as an operational group, was part of a 122 strong aircraft formation, sending nine Wellingtons and six Halifaxes. Only two aircraft were lost that night, both Wellingtons, one a Polish crew from 300 Sqn and the other a Canadian crew from 426 Sqn.

The aircraft, piloted by 21 year old P.O. George Milne (s/n:J/9355), was lost without trace, presumably crashing into the sea on its way to the target, it was not heard from since leaving Dishforth at 22:37.

Within a month of 6 Group’s inauguration, 426 Sqn would suffer a heavy blow when its Commanding Officer Wing Commander Blanchard would be shot down whilst returning from Germany. The aircraft, a Wellington III ‘X3420’ was shot down by Hauptmann Manfred Meurer near Limburg with the loss of all six crewmen. It was a bitter blow to the fledgling squadron.

The role of commander then passed to Wing Commander Leslie Crooks DFC a non-Canadian, he would lead the squadron into battle on numerous occasions. A brave and determined leader, he would soon add a DSO to his collection, dutifully awarded after surviving an attack from a night fighter, when he nursed the stricken bomber home. Unable to land the aircraft due to its extensive damage, he ordered the crew to bail out leaving the Wellington to its ultimate and final fate.  Crooks, would go on to lead further operational missions with the squadron, but sadly his luck would run out over Peenemunde on the night of August 17th/18th 1943 when he was lost for good.

The time then came to upgrade Dishforth, its now unsuitable surfaces needed replacing and the airfield needed bringing up to ‘modern’ standards. The two Canadian units moved out – 425 Sqn to North Africa in May, and 426 Sqn to Linton-On-Ouse in June. That left the airfield operationally silent. The bulldozers and earth-movers then moved in;  its three concrete and tarmac runways were constructed, and the whole site was upgraded to the Class ‘A’ specification. By November the works were all but complete and it was handed over to No.61 Training Base, 6 (RCAF) Group, led by the transfer in of 1664 Heavy Conversion Unit (HCU) operating the four engined heavy the Halifax Mk.III.

Formed in May 1943 at Croft, they were renamed 1664 (RCAF) ‘Caribou’ HCU on moving to Dishforth and were primarily a training unit converting pilots onto Halifaxes from other aircraft – usually twin engined bombers like the Wellington. One of their first customers was the former Dishforth unit 425 Sqn, who returned from Tunisia with their Wellingtons to convert over to the Halifax over the next month. By mid December they were all done, and they departed for RAF Tholthorpe where they picked up their new aircraft. 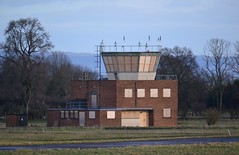 A rather sad end to the Watch office.

Converting crews to the four engined types was no easy task, and whilst crews were experienced, accidents did still happen.

The first Dishforth blow came to 1664 (RCAF) HCU two days before Christmas 1943. Halifax V ‘ZU-C’ crashed after getting into difficulties whilst on a night training flight. The aircraft was partially abandoned, but three of the crew were killed and a further two were injured. This tragic accident would not be the last for the Dishforth unit though, and would draw 1943 to a sad close.

Some of these accidents were understandably down to the inexperience of crews on the new type, as the night of January 30th 1944 showed. Halifax V DG308 flown by F.L. J. Bissett DFM along with a student, came into land at Dishforth. The student inadvertently lowered the bomb doors rather than the flaps causing the aircraft to come in too fast. Bissett, in an effort to avert a catastrophe, swung the Halifax off the runway subjecting it to great stresses. As a result of this action, the undercarriage collapsed and the aircraft fell on its belly severely damaging it. But Bisset had done his job, and the student had learnt a valuable lesson.

With two further accidents on the following night, one due to a strong cross wind and the second when the aircraft hit high ground due to excessive drift, the training programmes were proving hard going for the Dishforth unit.

For some crewmen there was even the misfortune of multiple crashes, and for one man in particular, these unfortunate events occurred in the space of just one week.

For Sgt. H. (Ray) Collver, mid March would be his worst week. During a training flight on the 16th, his Halifax swung on landing, badly damaging the undercarriage. Thankfully however, there were no major injuries and all walked away relatively unhurt. But then on the night of 21st/22nd, he was on a night training flight (thought to be a nickle flight), when the port inner engine failed, and refused to feather. The cause of the problem was not clear, but the aircraft began to shake violently as a result. Before coming down in Derbyshire, Sgt. Cullver gave the order to abandon the Halifax, two of the crew escaping through the nose hatch. By then though, the bomber was too low for others to escape, the remainder of the crew were effectively trapped inside. When the aircraft hit the ground, two of the four left on board were killed, the remaining two Sgt. Russ Pym and Sgt. Cullver were injured, Cullver being thrown clear as the Halifax struck a bank aside a road*1.

On many occasions though, pilot error was not a cause, engine faults seeming to have been the primary cause of the aircraft’s demise; problems that either required an engine to be shut down or engines failing, seeming to be high on the list of causes for the squadron’s losses.

During August a Lancaster Finishing Flight was set up within the HCU at Dishforth, its job to polish pilots and crews in their Lancasters before returning them to operational units. Loses here would be far lower.

By the years end, the HCU would have lost some fifty aircraft on training flights, which for a training unit, was a substantial number of heavy aircraft and for the Command.

With the close of the war ahead, changes are in the pipeline for both the Royal Air Force and Dishforth. With the need for bombers diminishing, a new form of aircraft arrives and in good number. In the final part we see Dishforth head in to the jet era but opportunities are missed and sadly it gets left behind, its future then looks bleak.

The full page can be seen in Trail 61 – RAF Dishforth – Along the A1 Trail.