As we continue our journey north along the A1, the ‘Great North Road’, (Trail 54, Trail 57) we come across an airfield that began life in the prewar expansion period of the 1930s. Destined to become a bomber station for a large part of the war, it soon returned to its initial role as a training base, a role it carried on after the war’s eventual end. Today the base is still active but in the hands of the British Army, and although no major flying takes place, it does occasionally see the odd aircraft pass by.

This airfield sits alongside the A1 road, this offers opportunities to see what’s left and observe the goings on at the base. On the next part of our trail along the A1, we stop off at the former RAF Dishforth,

As a prewar airfield built during the expansion period, Dishforth was a ‘non-dispersed’ airfield, distinguished by having both its accommodation and technical areas located closely together. Initially it fell under the control of 3 Group Bomber Command, but would soon transfer to 4 Group for use as a training airfield for their bombers; a Command which in itself was also born out of the expansion era of the 1930s.

By the war’s end, Dishforth would have grown considerably, eventually being capable of catering for over 2,500 personnel, and upgraded to the standard Class ‘A’ specification with three concrete and tarmac runways (1 at 2,000 and 2 at 1,400 yards in length). The main runway runs parallel to the main A1 road, in a north-west to south-east direction, with the two subsidiary runways running east / west and north-east to south-west, thus forming the recognisable ‘A’ shape of this airfield design.

Around the perimeter were twenty-seven pan and eleven spectacle hardstands, and to the south-east, located between the legs of the ‘A’, were five ‘C’ type hangars and a range of ancillary, technical and storage buildings. The Watch office, initially located between the hangers overlooking the pan, was later rebuilt to the north of the airfield over looking the entire flying site now to the south.

Alongside Dishforth came airfields at Linton-on-Ouse, Driffield, Leconfield and Finningley, all of which would see a range of light and medium bombers grace their runways. Other major airfields built at this time included the bomber bases at Wyton and Upwood in Cambridgeshire, Scampton in Lincolnshire and the fighter airfield at Debden in Essex, the RAF was indeed expanding at great speed.

On January 12th 1937, the first of the squadrons arrived, 10 Squadron RAF, with a mix of Heyfords and Virginias. The move was led by the advanced party, followed by the main party on the 25th and the rear party on the 2nd February. Whilst settling in and preparing the airfield for operations, they were joined by another squadron, 78 Sqn, also with Heyford IIIs.

K3489 the first production Handley Page Heyford the last biplane heavy bomber. These aircraft were well liked at the time and were, unbelievably, able to be looped as was seen at the 1935 Hendon Air show.  Note the retractable gun turret. (©IWM ATP 7352C)

Within a month of their arrival at Dishforth though, 10 sqn would begin to replace these now obsolete biplanes with Whitleys, flying both the MK.I and later the much improved Merlin powered MK.IV, until their eventual departure from Dishforth in July 1940. The first of these Tiger IX powered MK.Is arrived on the 9th March, followed by sporadic arrivals culminating at the end of June, with a full complement of aircraft; the last of these being Whitley K7195 on the June 25th.

One of the highlights for 10 squadron’s posting to Dishforth, was to perform a ‘set piece’ at the 1937 Hendon Air Show, five Dishforth aircraft performing well to the gathered crowds below. This was nothing new to the Squadron, having previously performed at Mildenhall for the King’s review and at Old Sarum for an Indian Army Officers School, both in July 1935.

Over the remainder of the year and into 1938, a number of observer calibration flights took place. These were later supplemented with squadron operations, under what was described as ‘war conditions’, and although repeatedly hampered by bad weather, the squadron managed 3,733 daylight hours and 752 night flying hours, over the two year period.

78 Sqn, which was officially reformed on 1st November 1936 under the command of Wing Commander M.B. Frew DSO, MC, AFC, was also assigned the obsolete aircraft. With a second flight forming in April 1937, they too soon began updating these models with both the MK.I and later in 1939, the MKIVa Whitleys.

Following the disbandment of the rather mashed together Air Defence Great Britain (ADGB) and the introduction of the four commands (Fighter, Bomber, Training and Coastal), Dishforth and its two squadrons would now fall under the control of the newly formed 4 Group. With Air Commodore A. T. Harris as its (short lived) lead, 4 Group’s headquarters made its move from Mildenhall to Linton-on-Ouse, only a few miles to the south-east of Dishforth. Yorkshire would now become the county synonymous with the Group and its aircraft.

4 Group had struggled obtaining a suitable bombing range to use with its Whitleys, Harris, in his book ‘Bomber Offensive‘, talks about being frustrated because he repeatedly came up against local objections. Abbotsford was one such site that dragged on largely due to objections about the local swan population. As it turned out, having a range actually kept people away and as a result the swans thrived!

The dawn of 1939 would herald a new era. January introduced Dishforth to the forthcoming events with the loss Whitley K7211 off the coast of Kent. The last message from the aircraft being received  at 18:20 on January 23rd. There then followed an extensive search, but despite the efforts of the Royal Navy, neither the aircraft, nor its crew, were ever found, and the Whitley along with its crew remains missing to his day.

The declaration of war by Neville Chamberlain in September 1939, shook the nation. It brought with it immediate mobilisation orders to the Group. Within days 10 Squadron were ordered to send eight aircraft on a reconnaissance and ‘Nickle‘ flight over northern Germany. Following Air Plan No. 14, they were loaded with propaganda leaflets, the aircraft then flew over the ‘target’ dropping these ‘paper bombs’ on the citizens below. Returning anti-aircraft fire was light and sporadic, and as a result, all aircraft returned without incident. 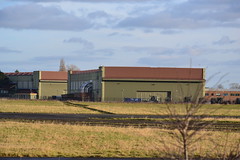 On the night of the 21st, two more 10 Sqn aircraft were ordered out on another Nickle operation, this time over Bremen and Hamburg; an additional order was given to “create a disturbance in Berlin”. Again no enemy aircraft were encountered, and anti-aircraft fire was very light. But with that, and a flight of three more Whitleys on the night of 1st/2nd October, 10 Sqn had gained the honour of being the first allied squadron to fly over the German capital during wartime.

Meanwhile, Dishforth’s other squadron, 78 Sqn, were allocated as 4 Group’s Reserve Squadron, acting as a pool for training crews and a reservoir for the Group’s other front line squadrons. I wonder if, at the time, there were any reservations about such a move from those within the squadron.

However, by early October 1939 a move was on the cards for 78 Sqn. Linton-on-Ouse was now calling, and early in the morning of 15th the move had begun with the Whitleys landing at Linton. This move, a few miles south, would temporarily leave Dishforth with only one operational squadron.

This lull lasted until early December, when 51 Sqn joined those at Dishforth. Like other squadrons, they had ditched their ageing Virginias for the more modern Whitley and were now in the process of upgrading these to the MK.V.

The winter of 1939/40 was a harsh one, and as a result little flying took place from the snowed in Dishforth. With only a short lull in February, aircraft were well and truly ‘frozen in’ for the large part of the winter months. It was most certainly a cold start to the war, and even when the thaw came, the ground remained dangerous to fly from due to water logging from the melting snow.

Following the German invasion of Denmark and Norway, 4 Group’s aircraft began attacks on airfields and supply routes being used by the Germans. Both 51 Sqn and 10 Sqn visited several of these airfields including Aalbourg on the night of 22nd-23rd April. On this operation, one of 51 Sqn’s aircraft, Whitely IV ‘MH-G’ piloted by F.O. J Birch, was lost without trace not long after departing Dishforth at 21:50.

By July 1940, the Battle of Britain was in full swing and 10 Sqn were moving out; the period between January and July being filled with numerous and relatively uneventful trips to Germany. Barely cold, their vacant beds were quickly filled by 78 Squadron, who had previously departed to Linton-on-Ouse; now they were given orders to return back to Dishforth.

The month of July had been one of some confusion for the squadron, initial orders requiring they transfer to the unfinished RAF Leeming, the place where kit and materials had, by now, been sent. What’s more, they were also informed that they would continue performing the role of reserve squadron whilst at Leeming, but now however, on moving to Dishforth, they were made fully operational for the first time since war had broken out with Germany.

The move went relatively smoothly, aircraft were deposited at Topcliffe (Dishforth’s satellite) with personnel transferring directly to Dishforth. The move involved organising transport from not only Linton, but also York and Leeming too, such was the wide spread of both men and equipment. As a result, “very little useful work” was done, the primary objective being to reorganise the squadron following the confusion of the orders and counter orders over the previous weeks.

A Whitley at an unknown location revving up its engines. © IWM CH 681

As we leave 1940 behind and head to 1941, we see, part 2, what changes come to Dishforth. There are more ventures into Germany and a special mission to Italy that results in success but at a great cost.

The full page can be seen in Trail 61 – RAF Dishforth – Along the A1 Trail.