In this trail we return to an RAF bomber airfield which opened later in the war. With a relatively quiet start, it soon became a front line base operating the four engined heavies the Lancasters of Bomber Command. Within a short time of it opening, it would become one of only a small number of airfields that would use the cleverly designed fog clearing system FIDO, a system that allowed aircraft to take-off and land in difficult weather conditions. As a result, it became a safe haven on more than one occasion.

In Trail 16 we return to RAF Tuddenham.

Tuddenham (as opposed to the decoy site North Tuddenham) is one of those places that is today surrounded by large towns. To the north-east lies Thetford, to the south-east, Bury-St.-Edmunds and to the south-west that mecca of horse racing – Newmarket. As a result, the landscape of the area today is somewhat different to what it was in the 1930s and 40s.

Using land requisitioned in 1943 it was opened that same year. A standard Class ‘A’ airfield, its main runway ran south-east to north-west and was the standard 2,000 yards in length. With two secondary runways both of 1,400 yards, it would open under the control of 3 Group Bomber Command. For its protection it had its own decoy site built a short distance away at Cavenham, but even this didn’t stop attacks on the airfield, none of which thankfully caused any major damage.

Built by Taylor Woodrow, it would have two T2 and later one B1 hangar, with thirty-eight loop style hardstands and a perimeter track of the standard 50 yards width. A standard watch office for all commands (design 12779/41) was later redesigned to match the new war-time standard 343/43 design which had the smaller windows especially designed for bomber airfields. 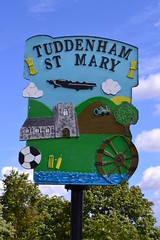 Tuddenham village sign showing its links to a once active airfield.

Accommodation for air and ground crews was located on land to the south of the airfield spread across twelve sites. A mix of huts, they would accommodate around 2,000 personnel of which some 250 were WAAFs. Built as temporary buildings, these huts were unheated and unhomely, they were cramped and cold and as such, Tuddenham was not one of the most popular stations with crews posted there.

A fairly nondescript airfield, it was first frequented by the RAF’s 90 Squadron with the huge Stirling MK.III. 90 Squadron in name, had been in existence since 1917 although it had been disbanded and reformed on no less than four previous occasions, and had been at a variety of locations before arriving here at Tuddenham. This time however, it would be a much more permanent formation, and for the duration of the war it would reside at only one station, that of RAF Tuddenham.

90 Squadron had previously been recreated to test the suitability of B-17s for RAF service. Initially based at Watton, it would be less than a year before they were disbanded once more. Their more recent reincarnation led them to Wratting Common, from where they departed on their journey to Tuddenham on October 13th 1943.

According to the official records*1, this move was ‘worked out in every detail‘ and it went ‘expeditiously without incident‘ even though the airfield was still in a state of non completion. 90 Squadron’s first operational mission from Tuddenham occurred on the 17th, a return to mine laying off the Frisian Islands. Classed as ‘minor’ operations three aircraft were ordered to fly that day, one of which had to return early due to being struck by lightning and suffering damage to a number of areas including the rear turret. With only three other mining operations and an air-sea rescue search that month, the move to Tuddenham would have been uneventful had it not been for an accident involving Stirling EF497, piloted by Sgt. Wallace Jones who was aged just 21. The crew of the Stirling were on an air test when the aircraft struck trees just close to RAF Benson in Oxfordshire. As a result, all of the crew, of which three were in the RCAF, died in the ensuing crash.

With only two other operational losses before the year was out, the Stirlings of 90 Sqn were not fairing as badly as many other units, but the days of the type were indeed now numbered as losses overall in 3 Group were high. The Stirling would soon be relegated to secondary duties completely.

December 1943 would see a major installation take place at Tuddenham. By now, the fog dispersal system FIDO, was in place across several other British airfields and was proving to be a major breakthrough in poor weather flying.

Designed after pre-war investigations into ways of dispersing fog, it led to oil burners being laid along a mile length of the main runway at Tuddenham. Where these crossed secondary runways, the burners were entrenched and metal plates placed over the top to prevent aircraft using these runways, from having an accident.

At Tuddenham (classed as FIDO Station XIX), the Mark IV Haigill burners were used, each burner was 40 yards in length and made of three pipes looped at the ends. Oil was fed into the burner via a feed pipe from the main pump on the southern side of the airfield.

Supplying these burners took huge quantities of oil, this was brought in on the nearby railway which passed through the village of Higham. A special siding was constructed which could take a large number of wagons from which fuel was pumped into a small pumping station. From here, it would then cross several fields via underground pipes into one of three large storage tanks capable of holding around half a million gallons of fuel in total.

Work began at Tuddenham early in the new year 1944, and again Taylor Woodrow were charged with the task of carrying out the construction. By August, they were ready and stocks had begun arriving ready for a test burn.

FIDO amazed all those who saw it for the first time. Its ability to clear not only fog but low cloud as well, was a god send to those who were unfortunate enough to have found themselves lost in the thick of it. The first use of FIDO at Tuddenham was on August 8th 1944, when by pure accident, an American B-26 ‘Marauder’ was caught by fog. On that day, a test burn was planned, the burners were lit and the amazed onlookers watched as both fog and low cloud began to clear. Suddenly, out of the darkness and murk came the B-26, who had attempted to land elsewhere no less than eight times unsuccessfully. Seeing the bright blaze of Tuddenham’s burners, the pilot made for the airfield, flew over it to ascertain what it was, and once satisfied, made a successful wheels up landing.

FIDO would be used regularly over the next few months, in November it provided a safe haven for both RAF and USAAF aircraft. In Geoffrey Williams’ book ‘Flying Through Fire‘, he quotes one pilot as stating he could see Tuddenham’s FIDO “from Ostend at 7,000 ft“, a point that illustrates the effectiveness of FIDO in poor conditions.

The idea behind FIDO was to install it at a number of airfields that were located in a ‘hub’ of other airfields, thus keeping returning aircraft as close to their parent airfield as much as possible. It allowed returning aircraft to land (and take off) safely in poor or deteriorating weather conditions, but it was used ‘sparingly’, as in one day’s total of 6 hours burn, some 200,000 gallons*5 of fuel had been used. Not many sites actually had FIDO installed, just fifteen in the UK, eleven of which were Bomber Command airfields. However, FIDO was undoubtedly successful, these fifteen alone enabled somewhere in the region of 2,500 safe landings that would have no doubt led to a number of casualties or even deaths had it not been available. The airfields were very much appreciated by those who were caught out when returning from raids over Europe, the only major complaints being glare from the bright fires as aircraft came into land*2. 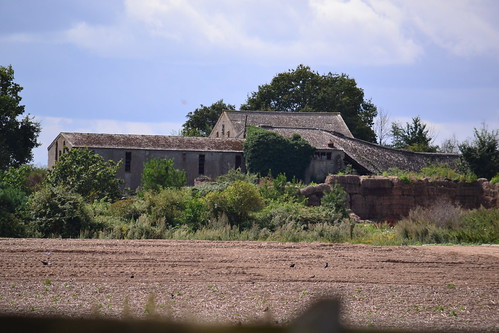 South of the airfield lay the Squash court and Gymnasium.

Back in early 1944, Tuddenham’s operations continued, the Stirlings of 90 Sqn were soldiering on. More mining operations and bombing raids on the French coast dominated the months of January and February, whilst ‘special duties’ (SOE supply operations) took over as the main focus from March to May. By this time the Stirlings were starting to be replaced by the Lancaster, as it was now being relegated universally to secondary operations: supply sorties, paratroop transport and mining operations off the European coast.

This transition began on May 11th, with pilots gaining initial experience by flying as 2nd pilot in other squadrons. New crewmen were soon being posted in, many of these from Conversion Units, whilst 90 Sqn’s Stirling crews were posted out. The continual cycle of trained crews coming in and ‘untrained’ crews going out filling the record books.

During all this operations continued on, and Stirlings continued to be lost. Four aircraft were shot down in May, three of them, on the two consecutive nights between the 8th and 10th, with many of the crewmen either being killed or captured.

The last Stirling to be lost on operations for 90 Sqn was on the night of June 2nd / 3rd when EF294 ‘WP-B’ crashed in France in the early hours of the 3rd. Of those on board, two managed to evade capture whilst the remaining five were caught and imprisoned in POW camps.

With the invasion of Normandy on June 5th/6th, four Lancasters and fifteen Stirlings were prepared for operations in connection with the landings, but the Lancasters were withdrawn – perhaps to the annoyance of those on board. The Stirlings all took off and carried out their mission successfully, each one returning to Tuddenham safely.

The last Stirling only operation took place on June 7th, the last two aircraft to return landing at Newmarket after completing their special operations. The Lancaster would now take over as the main aircraft and so 90 Squadron would soon return to bombing operations once more. 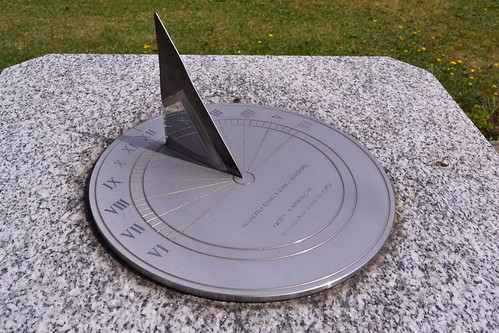 A sundial on the village green remembers the crews of 90 Squadron RAF.

In Part two the Lancaster arrive, but it is not the most auspicious of starts for the squadron.