A final stop on Trail 47 sees us north again, a few miles from the A1 on England’s north east coast, where in the distance are the Farne Islands, a small group of islands that are home to some 150,000 seabirds all fighting for their own small piece of space during the breeding season. A little further north is Bamburgh Castle and beyond that, Holy Island and Lindisfarne with its Castle and monastic history. It is truly a location full of history and beauty.

Here we stop off at the small coastal town of Seahouses, a town much visited by tourists along this beautiful Northumbrian coastal route.

During the First World War though, this was also the site, albeit for only a short time, of a wartime airfield and a marine operating station.

Seahouses or Elford as it was primarily  known, was initially a landing ground for 77 (HD) Sqn from February 1917. 77 Sqn, who were based at numerous airfields around the country including Thetford, Edinburgh and the not so far away Haggerston, used it well into 1918, flying Royal Aircraft Factory B.E.2 and B.E.12 models. They operated here until it became a Maritime Operations Station (RNAS Seahouses) in the summer of 1918. It was at this point that 256 Sqn were formed at the airfield with the idea of carrying out maritime patrols. Shortly after their creation though, they were absorbed as 256 Sqn into the newly formed Royal Air Force.

In conjunction with this formation, the final 92 acre site was graced with Bessonneau hangars, these were standard aircraft hangars constructed using a canvas covering over a wooden frame, and could be erected by a team of twenty skilled men within forty-eight hours. As a transportable hangar, they were used well into the 1930s being replaced by Bellman hangars after that time.

256 Sqn, initially operated the DH.6, one of  along line of de Havilland models built by Airco and de Havilland. These would be maintained in the hangars and used for anti-submarine patrols over the North Sea.

DH 6 Note the roundel under the top wing as a result of the wings being interchangeable. (public domain via Wikipedia)

The Airco company was founded in 1911 by George Holt Thomas, who initially had the idea of selling and maintaining Farman aircraft at Hendon on the outskirts of London. He met with Geoffrey de Havilland at Farnborough and soon an agreement was struck between the two for Airco  to begin manufacturing de Havilland aircraft. After a period away in service, de Havilland returned to Airco and the process of designing new aircraft fr the military began. Many of these new models were given the designation DH.

At Seahouses, 256 Sqn took delivery of the DH.6, their arrival being just after they were formed, in June 1918. A standard British military trainer biplane, it was designed to be cheap and easy to repair, de Havilland considering the mishaps that many pilots were likely to have during training periods. 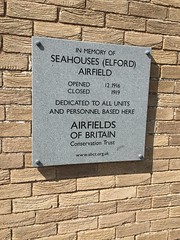 The memorial plaque erected by Airfield of Britain Conservation trust.

It was a solid basic design, with wings that were interchangeable, heavily braced and with a strong camber. Many considered them ‘too safe’ being almost impossible to stall even by the unwary, and with dual controls any trainee was even less likely to get into trouble as the instructor could easily take over if the situation required it. Even so, those that used them would often refer to them in derogatory ways, a range of unsavoury names becoming the more common wartime references.

256 Sqn consisted of four initial flights: 525, 526, 527 and 528 (Special Duty) Flights all arriving in the summer / autumn of 1918, with 495 (Light Bomber) Flight arriving at the war’s end. With detachments at New Haggerston (a field a few  miles north of here), Remmington, Cairncross and Ashington, the DH.6s were eventually supplemented by Blackburn Kangaroos of 495 (Light Bomber) Flight in the November of 1918. Both of these models operated with 256 Sqn even after they departed Seahouses for Killingholme as a cadre in January 1919. By the June of that year, with the war in Europe long over, the squadron was disbanded.

During their time here at Seahouses, 256 Sqn patrolled the coastal region around the Northumbrian coast. Flying in the twin seaters they were not armed but did carry bombs, luxuries such as parachutes were considered too heavy and so were not permitted. Flying over the sea, they would search for German submarines, but with a four hour duration, flights could be long and cold and concentration was sometimes difficult. Once spotted though, a sub would be forced to submerge, here it could do little damage, wartime submarines being unable to communicate or place mines once under water.

One Flight Lieutenant Morley Roy Shier, one of many Canadian pilots in the fledgling RAF was killed flying from Seahouses in his D.H.6 (C5172), when he went into the sea in fog off Coquet Island. He was killed on September 6th 1918, age 23,  in the last few days of the war. He is commemorated at the Hollybrook Memorial in Southampton, a memorial that honours some 1,900 service men and women from the commonwealth who were lost at sea or have no known grave from such action.

Two weeks later on the 19th September, another 256 Sqn accident occurred, also with a D.H.6 (C5174), when a young eighteen year old Air Mechanic 3 Thompson Mackenzie and his Canadian pilot 2Lt Clarence Wilfred Kerr,  were caught in a gust of wind on take-off at Edinburgh. Unable to control the light aircraft in the wind, it crashed killing Thompson Mackenzie and injuring Clarence Kerr.

When the armistice finally came, one over exuberant pilot, Captain Charles Augustus Grey Bennet, 8th Earl of Tankerville, decided to ‘celebrate’ in style. He took off from the airfield in a biplane armed with rockets for shooting down Zeppelins, and flew over Seahouses town. He decided he was going to have his own firework display and fired off the rockets toward to the sea. However, some fell short and landed on hay stacks at Seafield Farmhouse, setting fire to the hay. The local people, also excited by the rather large fires, came to watch the event unfold. 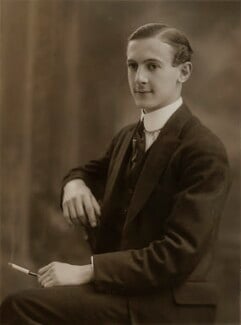 Charles Augustus Grey Bennet, 8th Earl of Tankerville by Bassano Ltd. In the Second World War he went on to become a Flight Lieutenant in the RAFVR © National Portrait Gallery, London

With the posting of 256 Sqn, Seahorses as it was now known, returned to agricultural use, any remnants of its aviation heritage being removed very quickly.

This signified the ending of all aviation activity at the site, Seahouses never being brought back to military aviation use again.

On June 14th, 2018, the Airfields of Britain Conservation Trust erected a memorial plaque in the town centre of Seahouses, to commemorate those who served. It is all that stands to remind us of that small and short lived airfield of the First World War.