On Armistice day we pay tribute to all Service men and women who served and died in the defence of freedom. This year we pay particular homage to those of the RAF through a visit to the remarkable St. Clement Danes Church in London.

St. Clement Danes church stands almost oddly in the centre of London in the Strand, surrounded on all sides by traffic; like an island it offers sanctuary and peace yet its history is far from peaceful. 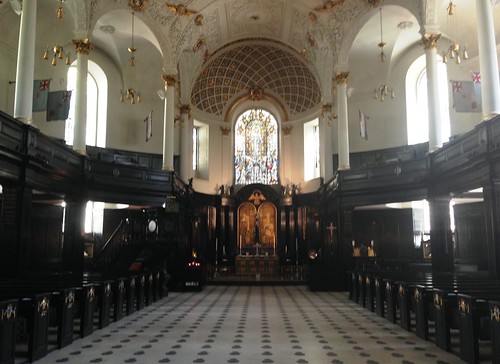 The view toward the Altar. The floor contains nearly 900 Squadron badges of the Royal Air Force.

It reputedly dates back to the Ninth Century AD following the expulsion of the Danes from the City of London, in the late 870s, by King Alfred. As a gesture, he allowed Danes who had English wives to remain nearby, allowing them to dedicate the local church to St. Clement of the Danes. Ever since this time, a church has remained, albeit in part, on this very site. 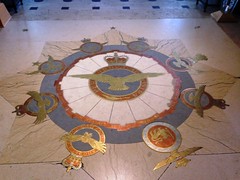 The ‘Rosette’ of Commonwealth Air Force Badges embedded into the floor.

In the 1300s and then again in the late 1600s it was rebuilt, the second time influenced by the great Sir Christopher Wren – notable for his designs of buildings both in and outside of London. Regarded as being Britain’s most influential architect of all time, he designed many famous buildings such as the Library at Trinity College and the Royal Hospital at Chelsea. Wren also redesigned both Kensington and Hampton Court Palaces – his influences stretched far and wide.

Of course Wren’s ultimate master-piece was St. Paul’s Cathedral in London, a structure that reflected both his skill, vision and personality.

During the Great Fire of London in 1666, eighty-seven churches were destroyed in London, but only fifty-two were subsequently rebuilt. Whilst not directly damaged by the fire, St. Clement Danes was included in that list due to its very poor condition and Wren was invited to undertake the huge task. 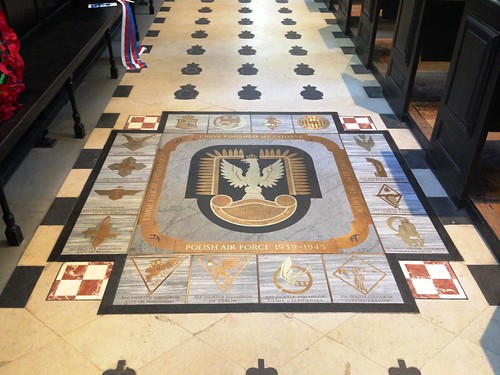 The Memorial to all the Polish airmen who served with the Royal Air Force during World War II.

It then stood just short of 300 years before incendiary bombs of the Luftwaffe destroyed it in May 1941. Leaving nothing but a few walls and the tower, Wren’s design had been reduced to ashes and rubble.

For over ten years it lay in ruins, until it was decided to raise funds and rebuild it. In 1958, following a national appeal by the Royal Air Force, St. Clement Danes was officially opened and dedicated as the Central Church of the Royal Air Force in memory of all those who fought and died whilst in RAF service, and to ‘serve as a perpetual shrine of remembrance’ to them all.

In completing the restoration, every branch of the RAF was included. At the entrance of the church, is the rosette of the Commonwealth made up of all the Air Forces badges of the Commonwealth countries, each of which flew with RAF crews during the conflicts. Beyond the rosette, the floor from the north aisle to the south aisle of the Nave contains nearly 900 squadron badges each one made in Welsh Slate and embedded into the floor.

Around the walls of the church, four on each side and two to the front, are ten Books of Remembrance from 1915 to the present day, in which are listed 150,000 names of those who died whilst in RAF service. A further book on the west wall, contains a further 16,000 names of USAAF personnel killed whilst based in the United Kingdom during the Second World War. 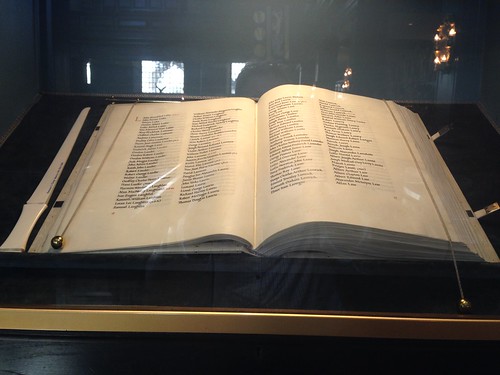 Ten Books of Remembrance contain 150,000 names of those who died in RAF Service 1915 – the present day. A further book contains 16,000 names of USAAF airmen who were killed.

On either side of the Altar, are boards and badges dedicated to every branch of the RAF. Two boards list the names of those who were awarded the Victoria Cross and others the George Cross. Other slate badges represent the various units to serve and support the main fighter and bomber groups, including: RAF Training units, Fighter Control units, Maintenance units, University Air Squadrons, Medical units, Communication squadrons, Groups, Colleges and Sectors.

In the North Aisle, a further memorial, also embedded into the floor, remembers those who escaped the Nazi tyranny in Poland and joined the RAF to carry on the fight during World War II. Each Polish Squadron is represented in a beautifully designed memorial around which is written:

“I have fought a good fight, I have finished my course’ I have kept the faith”

Smaller dedications can also be found around the church, such as the Mosquito Aircrew Association, dedicated to both air and ground crews of the mighty ‘Wooden-Wonder’. Some of these memorials are in the form of gifts of thanks many of which come from other nations as their own tribute to those who came from so far away to give their lives in the name of freedom and democracy.

At the going down of the sun and in the morning
We will remember them.

Why not support the British Legion through their website