In Part 2 Upwood progressed through the early war years as a training airfield operating a range of aircraft types. As the larger, heavier aircraft came n line, its wet and boggy ground became churned up necessitating the construction of hard runways.

By the end of the year these runways were completed, and in the early months of 1944, two more new squadrons would arrive at the airfield, 139 and 156 in February and March respectively.

By  now Bomber Command aircraft had been pounding German cities and industrial targets, the period January to March 1944 was to see Berlin hit particularly hard, and with Stirlings being withdrawn due to their high losses, the Lancaster crews would now be taking the brunt.

Now under the control of Bennett’s new Pathfinder Force (PFF), 139 (Jamaica) Sqn would bring with them the beautiful and much loved Mosquito MK.XX. Coming from nearby RAF Wyton, they had already begun replacing these with the MK.XVI, flying both models whilst performing operations from the Cambridgeshire airfield. The following month a Lancaster squadron, 156, who were based at another PFF airfield, RAF Warboys, joined 139. Within a month Upwood had become a major front line airfield, the roar of multiple Merlins now filling the Cambridgeshire skies. 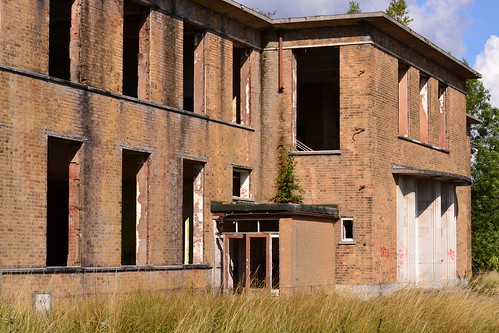 139 (Jamaica) Squadron had a long history, which had begun on July 3rd 1918. This first period of their existence lasted only a year, the unit being disbanded in March 1919. With the onset of war they were called back into operation being reformed in 1936, when they went on to fly Blenheims, and later Hudsons, until being disbanded and renumbered as 62 Sqn in April 1942. Reformed again in the June of that year 139 Sqn would go on to serve well into the late 1950s.

Named ‘Jamaica’ Squadron, 139 acquired their name as a result of the huge effort of the colony to provide enough money for twelve Blenheims, a remarkable effort considering the nature and size of the country. It was from Trinidad that Sqn. Ldr. Ulric Cross came, the most decorated West Indian of World War II, who earned himself the DSO and DFC whilst flying with the Pathfinders.

139’s drafting in to the Pathfinders occurred at the end of May 1943, leaving 2 Group for Don Bennett’s 8 Group, they formed the nucleus of the Light Night Striking Force (LNSF).  At this time they were still at RAF Marham, but moved across to Wyton and then onto Upwood arriving here on 1st February 1944, with a mix of Mosquito IV, IX, XX and XVIs.

There would be no settling in period for 139 Sqn, their first sortie, marking for a raid on Berlin, was due that very night. Take off for F.O. D Taylor and F.Lt. C. Bedell in Mosquito DZ 476, was at 17:50; they dropped their Target Indicator which was subsequently bombed on by Mosquitoes from another squadron. Whilst flak was recorded as ‘slight’, the aircraft was heavily engaged over Neinburg. The Mosquito landed back at Upwood, ending the squadrons first successful operation from here, at 22:40.

Photograph taken during an attack by De Havilland Mosquito B Mark IVs of No. 139 Squadron, on the locomotive sheds at Tours, France (date unknown) © IWM C 3409

156 Squadron were one of the four initial Pathfinder units having been taken on by the new Group in August 1942 whilst at RAF Warboys a few miles up the road. After two years of relatively high losses for the Squadron, the time for change had come, and they moved across here to RAF Upwood. Hopefully a new start for the depleted unit would see better results and higher morale. As 156 moved in, the few remaining aircraft of the NTU moved out, rejoining the main collection at Warboys, the unit having been split over the two sites for some time.

However, the first three months of 1944 were to prove to be the worst for 156 Sqn, over half its total yearly losses occurring during this period. This culminated, at the end of March, with the loss of four Upwood aircraft. Lancaster MK.IIIs: ND406 (S),  ND466 (Z), ND476 (V) and ND492 (L) all left as part of a seventeen strong force from Upwood joining with a further ninety-three other PFF aircraft to attack Nuremberg. Even though the weather was against the bombers, the operation went ahead, the 795 heavy bombers of Bomber Command making their way east. Strong winds caused havoc, with large parts of the force drifting off course, much farther north than they should have done. This resulted in them unknowingly bombing Schweinfurt and not Nuremberg. Outward bound, the German defences waited, many picking off the bombers before they even reached Germany. In total 95 bombers were lost, 82 of them on the outward journey. For 156 Squadron it was another devastating blow, and for Bomber Command a disaster, their biggest loss of the entire war*3. 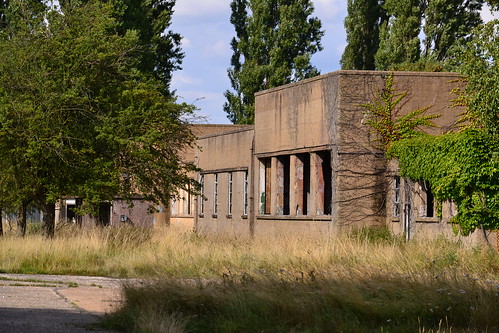 A huge number of derelict buildings remain on the now abandoned site.

Of the thirty 156 Sqn airmen lost that night (two Lancasters were carrying eight crewmen), only six survived, each of these being incarcerated as POWs, the rest all being killed and buried in this region of Germany.

The months preceding June were taken up with missions to support the impending D-Day landings. With Bomber Command forces being pulled away from targets in Germany, many missions now focused on V weapons sites, rail and transport links, coastal batteries and airfields across western France. The number of Pathfinder Mosquitoes increased, as did the need for precision bombing, the wider ‘blanket’ bombing not being implemented on these small scale targets.

The transportation plan as it was known, required intense operations from 8 Group, and although the number of missions rocketed the number of casualties fell. Morale was on the increase and things were looking up for the crews of Upwood based aircraft.

With the Pathfinders being mainly experienced and skilled crews, any loss was considered damaging. In the period up to D-Day, losses for both squadrons were  in single figures, but of those who were lost, many were DFC or DFM holders, including on the 27th – 28th April, 156 Sqn Lancaster III ND409, which had five DFC bearing crewmen on board.

During this raid, which was only some four weeks after Nuremburg, 323 aircraft attacked Friedrichshafen’s engineering plants, where components were made for German tanks. Highlighted as an ‘outstanding’ raid, marking was near perfect which resulted in the entire destruction of the plant and almost three-quarters of the town.

Meanwhile, the Canadians were busily building Mosquitoes for the RAF, and on May 10th – 11th, the first Bomber Command MK. XX built in Canada, was written off when a flare ignited inside the aircraft. Returning from Ludwigshafen, the marker had failed to release only to cause disaster near Cambridge on the return flight. Inside the aircraft were Flying Officers G. Lewis and A. Woollard DFM, Woollard going on to survive a second serious crash on 12th June when his aircraft crashed in Sweden after it was hit by flak. Flying Officer Lewis in the first crash failed to survive.

In June 1944, a very special aircraft was unveiled at the de Havilland Canada Downsview factory during the ‘Million Dollar Day’ ceremonies. Mosquito KB273 was unveiled by  the cousin of Geoffrey de Havilland Junior, Joan Fontaine, the Hollywood film star, who gave her name to the aircraft. KB273 ‘Joan‘ would be passed to 139 Sqn here at Upwood before being handed over to 608 Sqn in August. In fact, KB273 was one of many Mosquitoes from this same stable that passed through 139 Sqn to the Downham Market unit. It was sadly lost on 29th February 1945, its pilot evading capture whilst the navigator was taken as a POW.

Losses remained relatively low on a month by month basis for the two squadrons, an excellent improvement compared to previous months and against other units. By the end of the year, 139 Sqn had sustained twenty operational losses whilst 156 Sqn suffered fifty-two. All in all 1944 had been a little more positive.

The dawn of 1945 saw the world entering the final stages of the war. The long and cold winter of 1944-45 prevented many operations from being carried out, and even though the Luftwaffe were finding it difficult to put up sufficient numbers of aircraft and skilled pilots, losses in Bomber Command were still high overall. Last ditch efforts saw attacks from fighter jets, mainly Me 262s, and 1945 would signify the end of operations from Upwood for one of the two Pathfinder squadrons based here.

For 156 Sqn the early months of 1945 would be their last, and although there was an all out effort, casualties were relatively light. With one Lancaster being lost in January (PB186) with all on board; three in February – two over the Prosper Benzol plant at Rottrop, (ME366, PB505) and another (PB701) over Dussledorf – January and February would close with few losses. March similarly would see another two in the closing hours of the month over Berlin, both crews of PB468 and PB517 being completely wiped out.

Germany continued to be pounded by large formations during April, a month that saw many of the last major operations for several squadrons. For 156, their final bombing mission came on the 25th, sixteen aircraft taking part in a raid to Wangerooge in which Bomber Command lost seven aircraft – six of which were collisions in near perfect weather. For 156 though, the raid was casualty free, and with that their bombing raids ceased. The final capitulation of Germany was taking place and mercy raids could now be flown to supply those who had lived in terror and hunger under the Nazi regime.

In that month alone, Squadron crews were awarded no less than: one DSO; nineteen DFCs; a CGM and three DFMs. Aircrews had flown over 850 operational hours in 141 sorties, a small fraction of the 4,839 they had flown in their three year existence. By June, operations for 156 Sqn had wound down at Upwood and they moved back to Wyton, finally being disbanded and removed from the  RAF register in September.

139 Sqn meanwhile, had continued their marking for night raids on German cities. During the period late February to the end of March, 139 Sqn carried out thirty-six consecutive night raids on Berlin, one of these being the largest ever attack by Mosquitoes on the German capital. On this operation, 142 twin-engined ‘Wooden Wonders’ from a number of different squadrons unleashed their loads in two waves over the German city. 139 Sqn leading the Light Night Striking force using up to date models of H2S.

After the Battle of Berlin had ended, along with a winter of heavy bombing, the analysis would now begin. Bomber Command’s effectiveness, and in particular its bombing strategy, would suddenly be under the spotlight, with its leader Sir Arthur Harris, the focal point. It would be a legacy that would last for generations to come, even to this day the debate continues, and there are many that fight the cause in support of Harris’s operational strategy.

The end of the bombing war for 139 Sqn came in May 1945, ironically their busiest month of the year, flying 256 sorties which culminated with an attack on Kiel.

Throughout their operational tour, 139 Sqn had lost a total 23 aircraft in 438 raids , the highest of all the Mosquito PFF squadrons.

Part 4 takes us into the Cold War, the development of the jet engine in which Upwood becomes a graveyard for disbanding RAF Squadrons.