In Part 1 we saw how Upwood was formed and how the first squadrons arrived ready to show off their new Fairey Battles. As September 1939 dawned, war was declared and Upwood stepped up to the mark and prepared itself for the conflict.

The immediate issuing of order S.D.107 and S.D.107a, resulted in the whole of 63 Sqn, including their dispersed aircraft, being moved to Abingdon, whose crews and aircraft were in turn moved to France. The transfer of men and machinery being completed by 08:00 on the 8th September, at which point 63 Sqn joined No.6 Group, leaving Upwood far behind.

52 Sqn also brought back their aircraft from Alconbury filling the spaces left by 63 Sqn, before moving themselves to Kidlington, and then onto Abingdon where they would join once again with 63 Sqn.

The outbreak of war saw huge changes for the RAF. The immediate mobilisation began with the implementation of the ‘Scatter Scheme’, where aircraft were dispersed away from parent airfields to avoid the ‘imminent’ threat of attack. Over at West Raynham, 90 Sqn were doing just that. In mid September, aircraft that were dispersed to Weston-on-the-Green were now brought over to the all but vacant Upwood, in a move that preceded a more long lasting move by the squadron to the airfield. 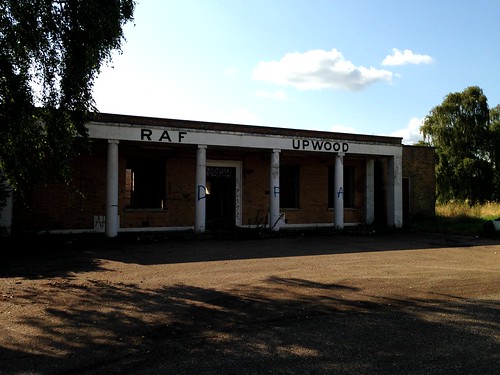 Guard house to the former airfield.

Over the next few weeks a mix of Mk.I and MK.IV Blenheims were collected and brought into Upwood supporting the training role carried out by 90 Sqn. Training was a risky business, as many trainee crews would find out. On the 18th October, two Upwood Blenheims crashed, one in a field with its undercarriage retracted following an engine failure, and the second on the airfield itself. The worst of these was Blenheim L4876 which crashed on take off, and resulted in the loss of the life of the pilot P.O T. Peeler. His observer, Sgt. Dobbin was injured, whilst the wireless operator, AC2 Brown,  managed to escape without injury.

Over the winter months Upwood would rise in the league tables of airfields notorious for flooding and water logged  ground. The heavy rains making the airfield unserviceable on numerous occasions. This caused great concern for the air staff who made the difficult decision to cut short training programmes, thus enabling the supply of aircrew to be maintained. It did however, mean that there would be a supply to front line squadrons of crews with partial or less than perfect training.  This problem would persist at Upwood for some time to come, eventually being partly solved by the building of hard runways.

1940 brought with it another training squadron, 35 Sqn, who also found the ground at Upwood difficult, their move being hampered for several weeks before they could finally settle in and begin operations properly. The summary for February shows thirteen days were lost to bad weather and nine to waterlogged surfaces!

March 12th 1940, saw another fatal accident at Upwood, with the death of trainee pilot Sgt. Alphonse Hermels (s/n: 517823) whose aircraft collided with a Blenheim on detachment from  90 Sqn, the two aircraft taking off simultaneously but neither apparently being aware of the other’s presence.

In early April, both 35 and 90 Sqns were disbanded and amalgamated to form No. 17 Operational Training Unit (OTU). The name of 35 Sqn would be reborn as part of Bomber Command at Boscombe Down at the year’s end, but that would be their ties with this rather wet airfield cut, until in 1956, when it would return extending its stay to a more permanent five years. For the next three years the OTU would be the main user of Upwood, flying with a wide range of aircraft types, including: the Lysander, Anson, Hurricane, Spitfire, Wellington and Fairey Battle. The unit  eventually departed to Silverstone – famous for British Motor Racing – in December 1943.

As the BEF were being withdrawn from the beaches of Dunkirk, Britain began to brace itself for the impending invasion. Although the Battle of Britain would not officially start for some time yet, the period immediately after Dunkirk saw minor attacks on British airfields, particularly those in East Anglia. On several days during June, enemy bombers would penetrate British airspace and unload their small bomb loads on these sites. Some of the first enemy intruder missions were recorded at this time, and Upwood would receive its fair share of bombings although little damage was done.

This operational ‘dry spell’ was momentarily broken when 26 Squadron appeared on the scene at Upwood. For what must be one of the most mobile squadrons of the RAF, 26 Squadron were constantly transferring from airfield to airfield, staying here on an overnight stop in early October. In the space of less than a week the squadron had operated from no less than 6 different airfields including: Twinwood Farm (Glenn Miller’s last stop), Barton Bendish, and Snailwell. 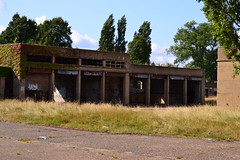 Upwood’s collection of buildings are numerous.

Upwood was to experience some rather difficult times and localised action. Numerous accidents were interspersed with attacks by marauding Luftwaffe aircraft, they even had their own parachuting spy. The event caused a great deal of excitement around the base, and saw the spy,  42 yr old Josef Jakobs, being found guilty of treason and subsequently executed at the Tower of London.

Jakobs, who parachuted into England on January 31st 1941, broke his ankle when he landed at Dovehouse Farm, Ramsey Hollow, a few miles from the airfield. He was found by passing farm workers (Charles Baldock and Harry Coulson) after firing shots into the air. With him were maps with both RAF Upwood and RAF Warboys identified, transmitting equipment, codes, £497 in £1.00 notes and false papers. He was arrested, taken to Cannon Row Police Station in London where he was handed over to Lt. Col. Tommy ‘Tar’ Robertson of MI5.

Robertson took Jakobs to ‘Camp 020’ a special interrogation camp run by MI5, on Ham Common, where he was treated for his injuries and interrogated with a view to turning him into a ‘double agent’. However, his position had already been compromised because of local gossip about his capture, and so MI5 could not guarantee his position with the spy network.

Jakobs was finally tried under the Treachery Act under military law – a court martial consisting of four military figures. The court hearing began on 4th August and lasted two days. He was subsequently found guilty of treason and on the morning of the 15th he was shot by a firing squad formed from the Holding Battalion of the Scots Guards at the Tower of London, his body being buried in an unmarked grave in St. Mary’s Roman Catholic Cemetery in Kensal Green, North-West London.*2

Often, training airfield squadrons would operate in conjunction with various specialised units, in this case 11 Blind Approach Training Flight who were formed here at Upwood, in October 1941, with Air Speed Oxfords. This unit was quickly renamed 1511 (Beam Approach Training) Flight, and trained pilots in the use of navigation beams for poor weather or night landings. These twin engined Oxfords were found in numerous training flights and at numerous airfields across Britain and in Canada, and were generally popular with trainees.

As the war progressed new advances meant that the older aircraft were becoming tired and in need of replacement. With larger bombers coming on line, Wellingtons pulled from front line service were now being used in training operations. Added to this, the introduction of the Lancasters of the Navigation Training Unit (NTU) in June 1943, meant that Upwood’s runways could no longer withstand the churning up by heavy aircraft, and it was now that Upwood’s notoriously bad surface began to really show its true colours. 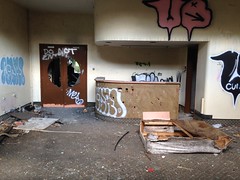 A scene typical of the buildings at Upwood

Being a heavier breed than the Blenheims and Oxfords, the ground began to break up, and it was for this reason that the OTU moved to Silverstone, and the Beam Training Flight moved out to Greenham Common. This left the airfield devoid of all operational aircraft apart from the NTU. It was now time to make amends at Upwood.

Whilst the site was all but vacant, one of the RAF’s Airfield Construction Flights moved in and construction began on the three concrete runways needed for Upwood to continue operations. The brain child of Wing Co. Alexander John ‘Daddy’ Dow, they were a huge organisation that supported the RAF’s front line squadrons by building, repairing and maintaining their runways.

In Part 3 Upwood see the arrival and use of the four engined heavies. The Pathfinders are born and Upwood becomes a front line bomber airfield.