On Sunday July 30th 1944, Lancaster PB304 from 106 Squadron RAF Metheringham in Lincolnshire, crashed with the loss of all on board, along with two civilians, in Salford Greater Manchester.

Lancaster PB304, was a MK.III Lancaster based at RAF Metheringham in Lincolnshire, flying under the squadron code ZN-S. It was tasked to attack enemy strong points at Cahagnes in the Normandy battle zone following the Allied invasion in June.

The early briefing at 04:00 was not a welcome one, many men having been out the night before following a stand down order due to bad weather and heavy rain over the last two days. On board that day was: F/L. Peter Lines (Pilot); Sgt. Raymond Barnes (Flt. Eng.); F/O. Harry Reid RCAF (Nav.); F/O. John Harvey Steel (Air Bomber); Sgt. Arthur William Young (W.O/Gunner); Sgt. John Bruce Thornley Davenport (Mid-Upper Gunner) and Sgt. Mohand Singh (Rear Gunner)*1.

The operation, code-named Operation Bluecoat, would involve attacking six specific targets, each one identified to assist a forthcoming offensive by British land forces in the Normandy area.

After all the ground checks were completed and the signal given to depart, PB304 began the long taxi to the runway, take off was recorded as 05:55, but it is thought that this was ten minutes early with the first aircraft (ND682) departing at 06:05. Once in the air, the aircraft formed up alongside twenty other 106 Sqn aircraft,  meeting with a smaller formation from 83 Sqn at Coningsby before joining the main formation.

The weather remained poor with heavy cloud blanketing the sky between 5,000 and 10,000 feet, as the 183 Lancasters from No. 5 Group and one Mosquito headed south toward the Normandy coast.

With further poor weather ahead, signals were beginning to come through to abandon the mission and return to base, but communication between aircraft was garbled and difficult to understand, it may have been as a result of German interference broadcasting messages over that of the master bomber. The order to abort finally came through just after 08:00 even though some of the formation had released bombs on target indicators (TI) dropped by the Pathfinders. Smoke was by now mixing with the low cloud causing more confusion and difficulty in identifying the primary targets. Not all aircraft understood the message however, and many continued circling in the skies above Cahagnes. To make a difficult situation even worse, there was by now, an  approaching formation of over 450 American A-20s and B-26s along with just short of 260 P-51 and P-47 escorts on their way to France; the sky was full of aircraft in thick cloud and was an accident waiting to happen.

Difficult communication continued, some aircraft were seen disposing of their bomb loads over the Channel, whilst others retained them. Various courses were set for home, but with many airfields closed in by low cloud, alternatives were gong to be needed and alternative courses were issued to the returning bombers of each squadron.

106 Sqn were ordered to fly north along the western coast, passing over Pershore and on to Harwarden near Chester, before turning for home. The messages coming through continued to be misheard or misunderstood with several aircraft landing at either Pershore, Harwarden or Squires Gate at Blackpool. Gradually all aircraft managed to land, whether at home at Metheringham or at away airfields. Patiently the Metheringham staff waited, nothing had been heard from PB304 and they could not be contacted on the radio, something was wrong.

Precise details of the accident are sketchy, but an aircraft was seen flying low and in some difficulty. It passed low over Prestwich on the northern edges of Manchester, where it was later seen engulfed in flames. It twice passed over a playing field, where some suspect F/L. Lines was trying to make a crash landing, but this has not been confirmed. At some time around 10:10 -10:15 the aircraft came down resulting in a massive explosion, a full bomb load and fuel reserves igniting on impact. Many houses were damaged in the explosion with one being completely demolished.

As a result of the accident, all seven of the crew were killed along with two civilians, Lucy Bamford and George Morris, as well as, what is believed to be, over 100 others being injured all to varying degrees.

PB304 was the only aircraft lost that night, in a mission that perhaps with hindsight, should not have taken place. The poor weather and difficult communication playing their own part in the terrible accident in Salford on July 30th 1944. 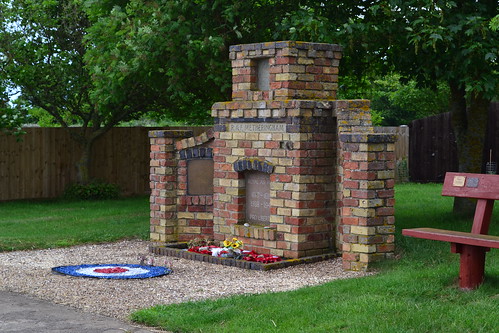 The Memorial at Metheringham pays tribute to all those who flew with 106 Sqn.

A book written by Joseph Bamford the Grandson of Lucy who was killed that night, was published in 1996. “The Salford Lancaster” gives excellent details of the crew, the mission and the aftermath of the accident, published by Pen and Sword, it is certainly worth a read for those interested in knowing more about the incident.