In this second part of Trail 58, we leave Rackheath behind and head east towards the coast of East Anglia, and an area known as the ‘Broads’. A few miles across this flat and wetland we come across a small airfield, currently used by crop sprayers and small light aircraft. This private field, almost indistinguishable from the farming land around it, just hints at its past, with two rundown towers, a blister hangar and a small collection of pathways, its history is fast disappearing.

In this the last part of Trail 58 we visit the former RAF Ludham.

Ludham is a small airfield that has been in existence since September 1941, when it opened as a satellite for RAF Coltishall located a few miles to the north-west. It would change hands on more than one occasion over the next few years, being assigned to the RAF, the USAAF and the Royal Navy before returning to RAF ownership once more.

Throughout this time, it would operate as a fighter airfield seeing  range of Spitfire Marks along with a Typhoon Squadron. A number of B-17s would crash here as would a P-38 lightning and several other USAAF aircraft; part of Ludham’s history being that of an emergency landing strip for returning aircraft.

At its inception, Ludham was a grassed airfield, with a hardened perimeter track linking a number of dispersals. Being a fighter airfield the perimeter was only 40 feet wide but of concrete construction, thus it was not designed for the larger, medium or heavy bombers of the allied air forces.

Furthermore, as a satellite, Ludham lacked the design features of a major airfield, and so the accommodation and technical facilities were not up to the same standard of those found on other sites. The accommodation huts were scattered around the north-western side of the airfield, and an initial single storey watch office was also built to the west. A standard wartime design for satellite airfields (design 3156/41), it was a single-roomed structure with a pyrotechnic cupboard and limited views. A switch room was then added to the building (design 1536/42) in early 1942, before the entire building was abandoned and a new twin storey watch office built. As with most airfields of this type, the twin storey building was constructed in conjunction with the addition of the concrete runways. This new office  (design 12779/41) with lower front windows (343/43) would have many benefits over the original not least better views across the airfield site. 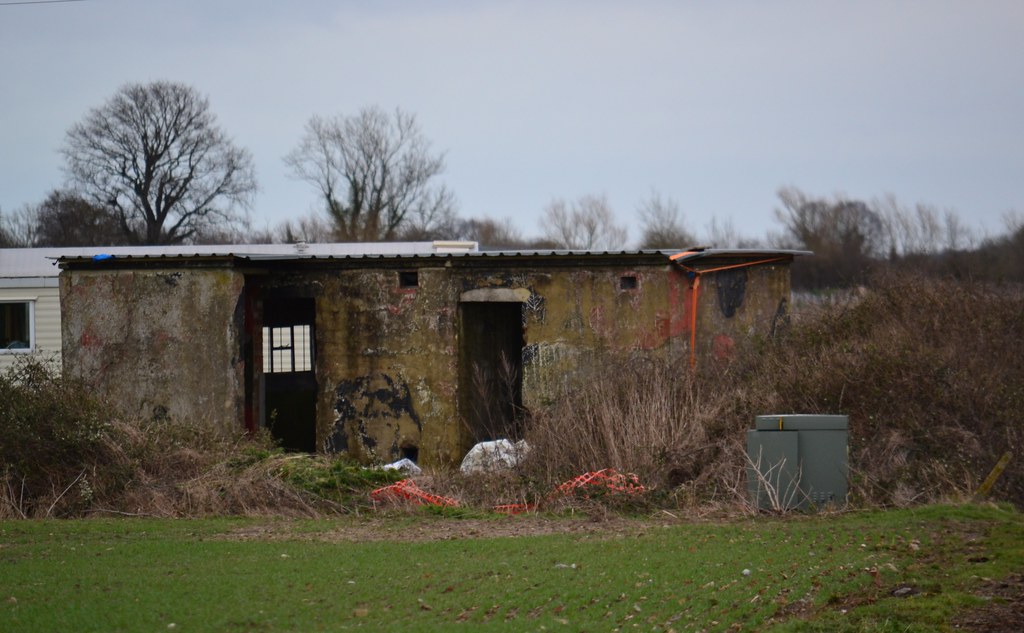 The much dilapidated original Watch Office.

Another interesting, but not unique feature of Ludham, was a Modified Hunt Range, a structure designed to teach aircraft recognition. The structure, built inside a Laing Hut, saw the trainee sat in front of an enormous mirror. A moving model was then placed behind the student on an elaborate turntable that could not only move in the horizontal plane, but both turn and bank. A selection of lights and a cyclorama added to the realism, with the model reflected in the mirror in front of the student. The combination of all these features provided the students with life-like conditions, thus recreating the same difficulties they were likely to find in combat situations.

For much of its early life, Ludham was used as a satellite of Coltishall, although many of its squadrons were based here from the outset. The primary aircraft seen here was Supermarine’s magnificent Spitfire, the first of which was the MK.VB of 19 Squadron.

19 Sqn had only had this mark of Spitfire since October, previously operating the MK.IIA at RAF Matlask not far from here on the north Norfolk coast. The Mk V was the most produced Spitfire of all 24 marks (and their sub variants) and was armed with a combination of machine gun and canon depending upon which wing configuration was used. The link between the Spitfire, Matlask and Ludham would be a long one, with units moving from one to the other. forging a bond that would last the entire war.

Arriving in the opening days of December 1941, 19 Sqn immediately began carrying out patrols and bomber escort duties over the North Sea, a duty they had been undertaking whilst at Matlask. On several occasions they would fly out to meet incoming Beauforts and their escorts, after they had completed their anti-shipping missions along the Dutch coast. Daily flights would take: Red, Green, Yellow, White, Black or Blue section, each containing two aircraft, over Lowestoft and Great Yarmouth and around the coastal regions of the Norfolk / Suffolk coastline.

However, most of these encounters produced little in the way of contact – even when pilots were directed onto the enemy aircraft. On the 9th, P.O. Halford and Sgt. Turner were vectored onto an intruder, but neither aircraft saw, nor encountered the ‘bandit’, and they returned empty handed. Another two scrambles that same day by ‘Green’ and ‘Black’ sections also proved fruitless, although ‘Black’ section did manage to locate the aircraft which turned out to be a friendly. 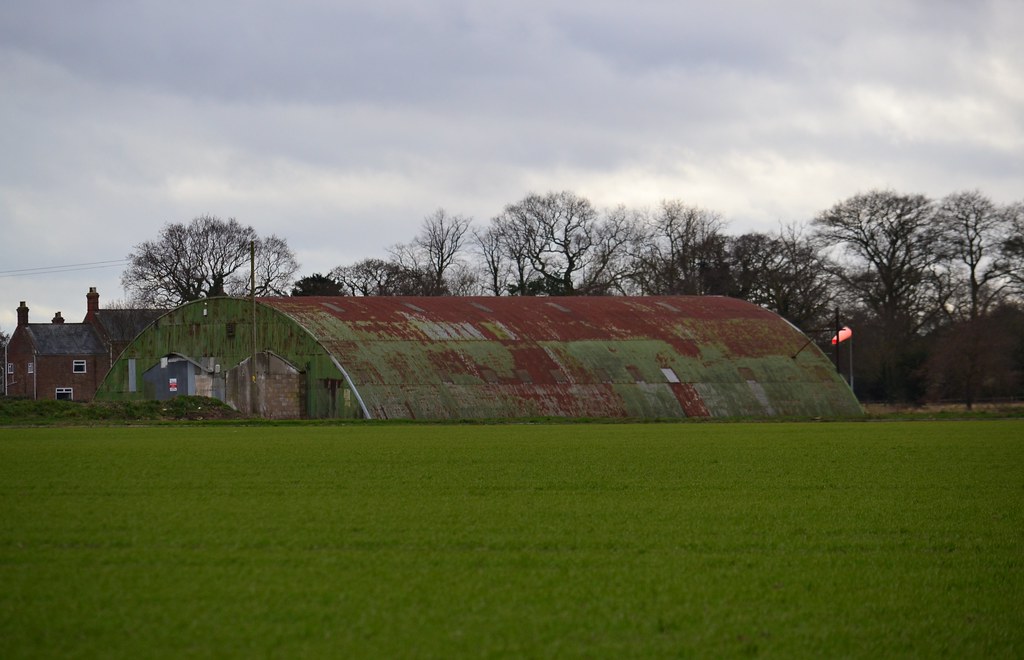 An original Blister hangar now located on the former runway.

Other duties carried out by 19 Sqn included shipping reconnaissance flights, shadowing and monitoring shipping movements across the North Sea, particularly along the Dutch coast. Taking off at 11:20 on December 18th, F.O. Edwards and P.O. Brooker flew at zero feet across the Sea to Scheveningen where they spotted a convoy of 11 ships. One of these was identified as a flak ship protecting the convoy as it left for open waters. The pair then turned north and flew along the coast to Yumiden where they encountered three more ships. No enemy aircraft were encountered and the pair returned to Ludham to file their report.

Then on Christmas Eve, P.O.s Vernon and Hindley in ‘Blue‘ Section were tasked with a ‘Rhubarb‘ mission to attack the aerodrome at Katwyk. On route, they came across a convoy and two Me. 109Es, who were acting as escort / cover for the ships. The two Spitfires engaged the 109s, Blue 1 getting a two second canon and machine gun strike on one of them at 300 yards range. Black smoke was seen coming from the fighter which dived to the sea only to pull up at the last minute and head for home. Blue 2  engaged the other enemy aircraft, but no strikes were seen and the German pilot broke off also setting a course for home. The two Spitfires then engaged the convoy attacking a number of vessels, each pilot recording strikes on the ships, claiming some as ‘damaged’. After the attack they returned home, this leg of the flight being uneventful.

These events set a general pattern for the next four months, and one that would become synonymous with Ludham. Then, on April 4th 1942, 19 Sqn would move to RAF Hutton Cranswick, in the East Riding of Yorkshire, a direct swap with 610 Sqn who had been stationed there since the January.

Also during this time a supporting squadron had also been at Ludham, 1489 (Fighter) Gunnery Flight, (formerly 1489 (Target Towing) Flight) which had moved in to help prepare fighter pilots for air-to-air combat. Around the time that 19 Sqn departed Ludham, 1489 Flt also departed, also going to Hutton Cranswick with 19 Sqn where they were disbanded in 1943.

610 Sqn were another Spitfire squadron also operating the MK.VB at this time. They too got straight back into action carrying out the patrols undertaken by 19 squadron before them. No engagements were recorded until the 8th, when what were thought to be two ‘E’ boats were sighted but not engaged.

The remainder of April was much the same, several convoy escorts, reconnaissance missions along the Dutch coast and scrambles that led to very little. On the 27th two Spitfires did encounter and Ju 88 which they shot down, the crew from the Ju 88 were not seen after the aircraft hit the water. On the next day, ten Spitfires took off between midnight and 01:05 hrs to patrol the Norwich area. Here they saw green parachute flares, and flew to intercept. Sticks of bombs were then seen exploding in the streets of the city, and various pilots engaged with Do 217 bombers. Strikes were recorded on the enemy aircraft, but they were lost in smoke and they could not be confirmed as ‘kills’. Further attacks occurred again on the 29th and again strikes were seen by the RAF pilots on the enemy intruders.

The period April to August was pretty much along similar lines, routine patrols, shipping reconnaissances and scrambles.  Then in mid August, 610 Sqn would take part in one of the Second World War’s more famous failures.

Ludham had a mainly uneventful entry to the war, sporadic scrambles, intermittent contacts and many hours of training, its future looked secure. But, there were many changes ahead and many events that would put it firmly on the map of history.

In Part 2 we see how these changes affect Ludham and its future.

The full story of RAF Ludham appears in Trail 58.