A note kindly sent in by Mitch Peeke regarding an update of the Allhallows memorial – 379th BG after its winter ‘clean up’.

I had taken the plaque and the storyboard down for the winter, after I got out of hospital (that’s another story!). The storms we’d had plus the unprecedented amount of rain, had inflicted some damage to the base work. Paul Hare and his Grounds keeping team at the Holiday Park once again stepped in. They installed a third, lower stand for me and then carefully removed the decorative stones so they could concrete the entire base, putting the stones back on the setting concrete so that the whole thing is now set and solid. I came back and repainted the original stands.

I then re-installed the original plaque and storyboard, the backboards of which I had re-varnished. On the third, lower stand is a new plate I had made, bearing the only known photos of some of the crew members. The pictures had been taken by Teddy Chronopolis during a training flight in Texas. His daughter, Jeanne, very kindly let me have copies, which I took to the signmakers. Having done that, I went down onto the beach and gathered up loads of Oyster shells and some driftwood. I laid the driftwood at the base of the lower stand with some of the Oyster shells, then used the rest of the shells to lay a complete border around the inner perimeter of the memorial base. The driftwood and shells are to symbolize the aircraft’s final resting place.I then took a photo, which I sent to both Jeanne and Noel. They were both touched by this “Mk II” memorial!

The memorial has now been formally inducted into the Allhallows Village Heritage Trail. The first guided Heritage walk was held on the second weekend in March and was well attended. Unfortunately of course, the Coronavirus restrictions have curtailed such activities at the moment and the Holiday Park is closed to holidaymakers too. But people do still exercise their dogs and themselves along the seafront. Hopefully, things will return to some kind of normality before this summer is done! 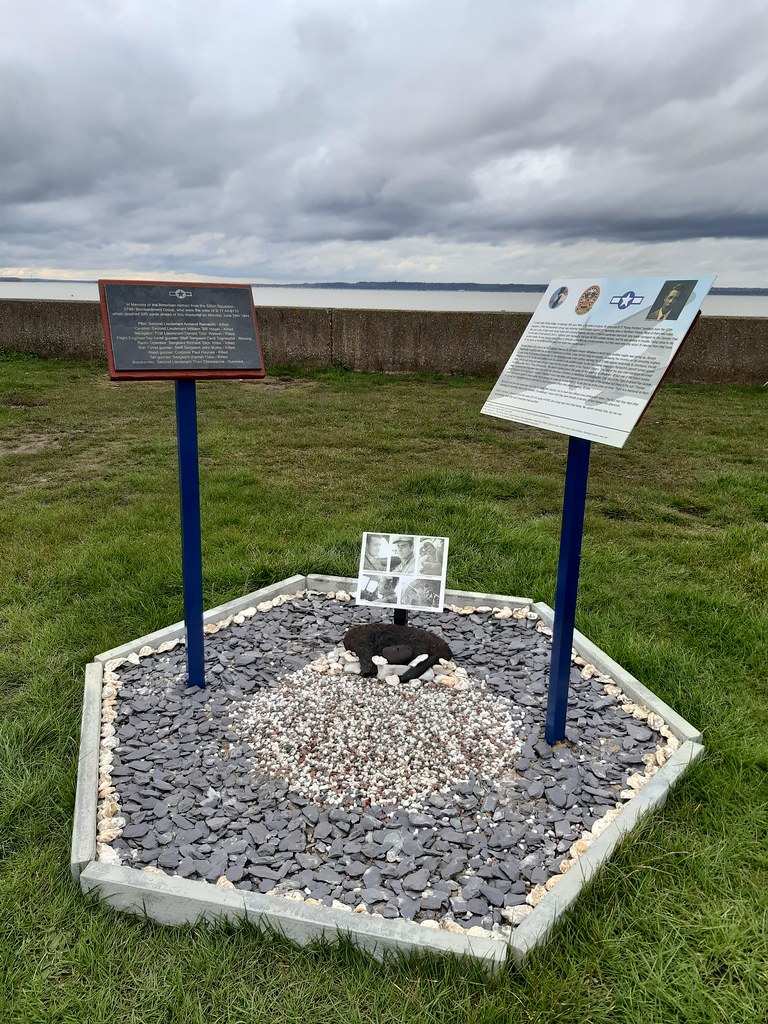 My thanks to Mitch for the update and photo, the memorial is looking splendid!

The original story was told in ‘A Long Way From Home‘.