In Part 1 of RAF Bottisham, we saw how the airfield was opened as a satellite and how it was underused for the first part of its life. With numerous short stay or training squadrons it never really  attained the level of prestige it wanted.

In part 2 we see how this struggle continued in 1943, but in 1944 things would change, and Bottisham would become a major front line airfield with a record breaking Fighter Group.

Between January and mid March, 2 Squadron were stationed here, albeit briefly, after receiving their own Mustangs in the preceding April. With their parent airfield Sawbridgeworth being unusable, they needed a new place to stay. The advanced party departing, led by F.Lt. Fletcher, on the 30 January, with the main party leaving the following day. Using these Mustangs 2 Sqn would fly long range reconnaissance flights over to Holland, where they would photograph military compounds and enemy shipping.

After that, in March, came another four short-stay units; 268 Squadron who stayed for a mere 4 days; 613 Sqn who stayed for twelve days; 169 Sqn for two days and 4 Sqn who stayed here for a little longer at four months. 4 Sqn were another unit who had previously used both the Lysander and Tomahawk before converting over to the Mustang.

Their departure in July signified the end of RAF operations from Bottisham airfield, the site being all but empty for the next six months. At this point the US Eighth Air Force took over the airfield, poured engineers into it, developed the technical site and  improved the accommodation blocks. After renaming the airfield Station 374, they began to bring in a new unit and Bottisham would finally become the airfield it was so struggling to be.

At the end of November, the twelfth and last Fighter Group to fly P-47s joined the VIII Air Force here at Bottisham. The 361st FG had only been active for eleven months when they entered combat in January 1944. Their journey had taken them from Richmond AAB in Virginia, through Langley Field, Millville New Jersey, back to Richmond and then, via the Queen Elizabeth, on to Bottisham their first European stop. Here the three squadrons: 374th FS, 375th FS and 376th FS flew P-47D ‘Thunderbolts’ or ‘Jugs’ as they were affectionately known, under the command of Colonel Thomas J.J. Christian Jnr, a high ranking officer who was killed in action in August 1944.

Colonel Christian led the 361st on their first combat sortie on January 21st 1944, as part of an escort of over 600 fighters, to the Pas de Calais and Cherbourg areas. Here, almost 800 B-17s and B-24s from the First, Second and Third Bomb Groups attacked thirty-six ‘V’ weapons sites, thirty-four in the Pas de Calais and two at Cherbourg. As the formation split, the 361st went to Calais, where poor weather hampered the bomb runs. However, allied air superiority meant there were little pickings for the fighters and few enemy aircraft were engaged or shot down. The group returned to Bottisham yet to draw their first blood.

Over the next few weeks, the Group would take part in further escort duties, covering bombers to Frankfurt, Watton, Wilhelmshaven and Gilze-Rijen. February saw them participate in the ‘Big Week’ campaign with further missions to Germany.

On April 27th, the Eighth Air Force undertook two missions, No. 322 and 323, both targeting areas in France and Belgium. On one of these missions was Capt. Charles H. Feller who took off with the 375th FS to escort the bombers. His P-47, ’42-75447′ was the only aircraft lost on that mission, a loss made worse by the fact that his brother Cpl. Jack Feller, was waiting to meet him at the main gate. Cpl. Feller, was informed that his brother was missing in action, and at the time his whereabouts weren’t known. It later transpired that he was killed whilst attacking the former French Air base Etampes-Mondesir which had been taken over by the Luftwaffe*1.

Back at Bottisham, the heavy weight of the Thunderbolt was playing havoc with the Sommerfeld tracking, forcing it to be replaced with Pierced Steel Planking (PSP), a feat that was achieved in a matter of just three days.

As the winter of 1944 passed and spring arrived, the 361st were told that their P-47s were to be replaced by Mustangs, the P-51 would be returning to Bottisham once more, but in a far Superior form than its original one.

In May, the first of these more agile and more powerful P-51s arrived, and under the guidance of General Arnold’s New Year message, “Destroy the enemy Air Force where ever you find them, in the air, on the ground and in the factories” they performed well achieving many high scores. Operating over the Normandy landscape during May, they attacked targets such as airfields, marshalling yards and transport systems, taking out 23 Locomotives in one day, a quarter of the entire day’s total. After Normandy, the 361st  would go on to  cover the breakout at St. Lo, and the failed airborne operation ‘Market Garden‘ in the autumn of 1944.

In late September 1944, the 361st transferred to Little Walden in Essex, but even with their belongings packed and furniture in transit, they would still be willing to perform their duty. On the 26th, they escorted over 1,100 heavy bombers to a range of targets in Germany. Whilst approaching Hamm, one of the pilots 1st Lt. Urban Drew (one of the Bottisham Four), spotted an Me 262 beneath him. After giving chase, diving at incredible speeds to catch the jet, he finally lost him, but not until after he had expelled over 1,300 rounds of ammunition, in a chase that took him from 20,000 ft to 0 ft, in a matter of minutes. The frustration of the pilots in catching these new aircraft clear in their reports back at base.

On the next day, as the move was progressing, another call came out. This time it would be a good day for the pilots of the 361st. Escorting almost 1,200 bombers to Germany again, the group spotted large numbers of enemy fighters attacking the bomber formation in a ‘company front’ attack. The P-51s dived in, splitting the 109s and 190s sending them wayward. ‘Heading for the deck’, a flight of four P-51s lead by Lt. William Beyer gave chase, and in what turned out to be a disastrous day for the Tibbenham based 455th BG (losing 25 aircraft the highest of any mission), the 361st managed to achieve the highest recorded number of kills for any fighter group to date.

With eighteen confirmed kills, five for Beyer who was an ‘Ace in a day’, and three for the Squadron Leader 1st. Lt. Victor Bocquin, it was an amazing achievement for the 361st, and as their last operation from Bottisham, it gave cause for great celebration.

Their time at Bottisham had now come to an end and they never returned to the airfield where they had cut their teeth. The move, instigated by a reshuffling of the Air Force’s organisation, meant that the 361st would be closer to the Bomb Groups they were to be attached to. It also signalled the end of Bottisham as an active front line airfield.

By the time the ‘Yellow Jackets‘ as they were known, had completed their tours, they had completed 441 missions, claiming 226 enemy aircraft destroyed in the air and 105 on the ground.

With the departure of the 361st, Bottisham fell operationally quiet. In the following June 1945, it was passed back to RAF control and linked once more to Snailwell, who used it as a relief airfield for Belgian pilots of the RAF (Belgian) Initial Training School. In the October, its status was reduced to satellite and the Belgian’s partially moved in. Using primarily Tiger Moths, the Belgians used Bottisham for a mere ten months, disbanding as a Royal Air Force unit in April 1946 and passing over to the Belgian Air Force. With that, Bottisham closed on May 1st, and stood empty until sold for agricultural use in October 1958.

Since then, the runways have been pulled up, the buildings on the airfield have been removed and the accommodation blocks have all been built up expanding the village that played such a great part in its life. On the corner of the airfield site a small cluster of buildings still stand, these include the former squadron offices (themselves former crew rooms), a sleeping shelter, and general purpose huts. These have been purchased and are being restored to house a small museum dedicated to those who served at the airfield. 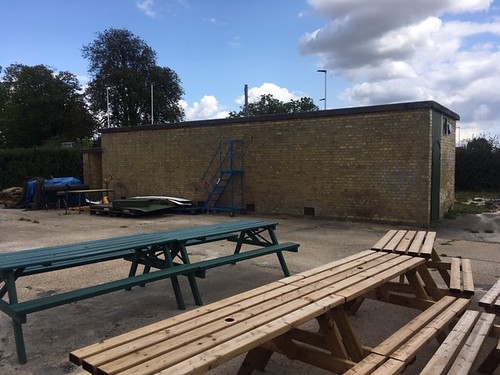 The airfield itself is now cut by the main A14 dual carriageway. But by leaving this road and turning along the A1303,  you can access both the museum and the airfield quite easily. The museum sits on the corner of the A1303 and Wilbraham Road, along which, if you turn right, cuts across the airfield and the remains of the former runway. As with many former airfields the runway line has been planted with trees giving a good indication of both its location and size. Parts of the perimeter track are also visible from this road to the north end, but otherwise there is little left to see other than a small selection of concrete patches. The village has a memorial in both the British Legion club and in the village with the Thomas Christian memorial. Sadly, little else of this small but once busy airfield exists today.

Bottisham airfield was generally speaking, a minor airfield housing a number of units in its early years. However, once it became fully fledged, it became not only significant, but a leader in the stakes of war. Now all but gone, the memories of those who served here are firmly embedded in the streets of Bottisham along with a few buildings that survive to tell their story.

My sincere thanks go to the members of the Bottisham Airfield Museum who so kindly stopped their work to give me a personal guided tour of the site when I visited. I wish them luck in their venture.

The full story of Bottisham can be read in Trail 55 – Around Newmarket.