In the latest Trail around Britain’s airfields, we visit four airfields so close that as the crow flys, they are a mere 12.5 km from the first to the last.  It is an area to the east of Cambridge, a large University City that now dwarfs the River Cam the narrow waterway that gave the city its name. The final airfield we visit lies on the outskirts of the city itself, and is probably more famous for its more recent operations under Marshalls of Cambridge, the Aerospace and Defence Group.

Our first stop though takes us through prime horse racing land, through the home of the Jockey Club and an area divided into studs and stabling, not for live stock, but for horses.

Our first stop in Trail 55 is the former RAF Snailwell, a small airfield where life was far from slow!

Snailwell lies  just outside of the town of Newmarket in the county of Cambridgeshire now infinitely famous for its horse racing. The village of Snailwell from which the airfield takes its name, lies on the northern edge of the former airfield which is now  owned, as is much of this area, by the British Racing School who vehemently protect it from prying eyes.

Sitting to the north of the Bury St. Edmunds railway line, the airfield opened in the Spring of 1941, after the levelling of ten Bronze age Barrows (ancient burial grounds) as a satellite for RAF Duxford located to the south-west. The airfield would go through an ever changing number of roles including: Army Co-Operation, training, and as a fighter base performing low-level attacks on shipping and land based targets. It would also see a wide range of aircraft types from the small trainer to the powerful tank-buster the Typhoon. Opened as a technical training airfield, it passed to the control of 28 (Technical Training) Group whose headquarters were located in London. It fell under the command of Air Commodore John Charles ‘Paddy’  Quinnell, an avid lover of sailing who had a distinguished military history that extended back to 1914, first with the Royal Artillery and then with the Royal Flying Corps.

As a small grass airfield, Snailwell was by no means insignificant. It had three grass runways the largest being just short of 1,700 yards long, whilst the second and third were 1,400 yards in length. The main runway crossed the airfield on a south-west to north-east direction protruding out of the main airfield area. Aircraft were dispersed on concrete hardstands, a mix of twelve ‘Fighter’ style Type B hardstands (capable of holding two aircraft side by side but separated by a bank) along with two 50 ft diameter ‘frying pan’ style stands. They also had the use of a Bellman hangar, and ten blister hangars for servicing and maintenance of aircraft*1.

To the north, hidden amongst the trees was a bomb store, with separate fusing buildings, tail stores, incendiary and component stores, access to the site being via a 12 ft wide concrete road.

In all, there were only a few permanent personnel at the airfield, accommodation was only erected for around 1,100 officers and enlisted men in Nissen huts over just two sites; Dormitory site 1 and 2, which were supplemented with a mess site and sick quarters. It is known that later users were camped in tents around the airfield perimeter – not ideal accommodation by any means. Unusually, the technical area was widely spread with many buildings being away from the airfield hub. The watch office, at the centre of this hub, was designed to 12779/41 and had an adjoining meteorological office attached, an unusual addition for this type. There was also a wide range of buildings, AMT trainer, two Link trainers, flight offices, sleeping shelters, parachute stores, fire tender huts and numerous associated maintenance stores and sheds.

During construction of the airfield a local road was closed, and a lodge, built at the turn of the century, utilised as a guard room for the airfield. This building later passed to the Jockey Club for use by its employees.

The initial users of the airfield were the Army Co-operation Squadron  268 Sqn RAF, who arrived at Snailwell with Lysander IIIs on April 1st 1941. Being a slow aircraft it was ideal as a reconnaissance aircraft, flying patrols along the coast of East Anglia, looking for any sign of an invasion force. After arriving at Snailwell from Bury St. Edmunds, the three Echelons immediately began training, three photographic sorties taking place on the very day they arrived. In the days that followed, combined Army and Air Force exercises were the order of the day, after which the squadron took part in intensive gas training along with routine flying. However, 268 Sqn would not settle here, yo-yoing between Snailwell and numerous other stations no less than eleven times between their first arrival, and their last departure to RAF Odiham on May 31st 1943. 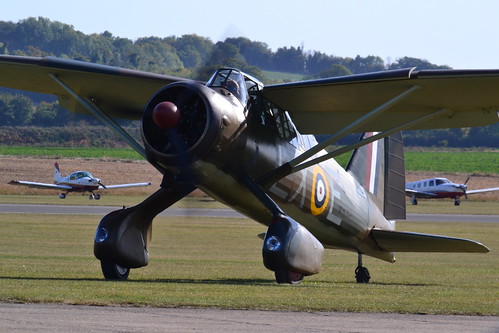 A Lysander at Duxford’s Battle of Britain Airshow 2019.

In the May of 1941, 268 Sqn would swap their ‘Lizzies’ (as they were affectionately known) for the Tomahawk IIA, an aircraft they kept until changing again to the better performing Mustang I a year later. These Tomahawks would perform a range of duties including – whilst based at RAF Barton Bendish in Norfolk – early morning ‘attacks’ on Snailwell as part of a Station Defence Exercise. These involved mock gas and parachute attacks along with low-level strafing runs. Being little more than a field, Barton Bendish provided no accommodation for visitors, and so the aircrews slept in tents overnight.

During the August of 1941 the first of Snailwell’s many short stay squadrons would arrive. 152 Squadron would use Snailwell for a period of just one week whilst transiting to nearby RAF Swanton Morley. Operating the sleek Spitfire IIA, the brain child of R.J. Mitchell, they would perform fighter sweeps, along with convoy and bomber escort duties. Arriving on the 25th, the only major event occurred on the 28th when the squadron escorted seventeen Blenheims to Rotterdam, Sgt. Savage being the only 152 Sqn pilot to be lost during the mission. The next day, ‘A’ flight searched for signs of him, but sadly found no wreckage nor any sign of Sgt. Savage.

Being a small airfield Snailwell was often home to detachments of squadrons, usually whilst on training. One such unit arriving on November 31st when 137 Sqn posted a detachment here whilst the main body of the squadron stayed at RAF Matlaske further north in Norfolk.  Operating the heavily armed escort fighter the Westland Whirlwind, they would perform escort duties for Lysanders, searches for downed aircraft and ‘X’ raid interception duties. Many of their patrols covered Great Yarmouth on the East Anglian coast in an area to the east of the airfield.

Designed in 1937, the Whirlwind had many teething problems with the engines proving to be a particular issue. After purchasing only 112 examples of the model, 137 would be one of only two squadrons who would use it in any operational role. After moving to Matlaske, 137 began a series of training operations, posting a detachment of aircraft to Snailwell whilst preparing to commence anti-shipping operations in the North Sea.  Once operationally ready, the unit moved north to RAF Drem (August 1942) before returning once more to Matlaske where further training would take place; ‘B’ Flight replaced ‘A’ Flight at Snailwell until both were reunited at Snailwell in late August. Anti shipping operations continued from Matlaske, with their final sortie occurring on August 20th in which an enemy Ju 88 was intercepted – the aircraft evading its pursuers in bad weather. Moving across to reunite the squadron on the 24th, 137 would perform their first operational sortie from Snailwell in early September, a feint attack against Lille. Designed to attract the Luftwaffe fighters into a trap, the twelve Whirlwinds and their fighter escorts failed to sight one enemy plane and all returned to their respective bases not having fired a shot. After this, the Whirlwinds were fitted with bombs and further training followed, but by mid September, they had left Snailwell and were heading for RAF Manston in Kent.

The summer of 1942 would be a busy period for Snailwell, with several squadrons utilising the airfield. At the end of March 56 (Punjab) Squadron would bring  the Hawker Typhoon MK.IA, a model they would begin replacing virtually immediately with the MK.IB. The April of that year was mainly taken up with practice formation flying and aircraft interception flights, before the squadron also moved to Manston in Kent. 56 Sqn would return briefly to Snailwell over the June / August period, but this would be short and they would then depart the airfield for good.

On June 15th 1942, a new squadron would be formed here at Snailwell. Under the command of Sqn. Ldr. F.G. Watson-Smyth, it would have two flights ‘A’ and ‘B’, each led by a Flight Lieutenant. 168 Sqn, initially flying the Curtiss Tomahawk II, was formed from the nucleus of 268 Sqn, and would remain here only until their aircraft and equipment had arrived. Being allocated RAF Bottisham as their main station, they would stay at Snailwell for a mere month. During this time aircraft would have their squadron numbers painted on, and Sqn, Ldr. Spear would give dual flying training to all pilots in a Fairy Battle.

Toward the end of June Sqn. Ldrs. Watson-Smyth and Bowen would visit Bottisham to discuss and prepare the accommodation arrangements for the squadron’s forthcoming arrival. Further deliveries of supplies took place and by the 26th there were seven Tomahawks on charge. On the 13th July, at 14:35 hrs, twelve Tomahawks took off from Snailwell and flew in formation to their new base at Bottisham, a mere stones throw from their current location. The move had begun and 168 Sqn would leave Snailwell for good.

In the August, whilst transiting to North Africa, 614 Sqn would place a detachment of their Blenheim Vs here, a further detachment being placed at Weston Zoyland with the main body of the squadron at Odiham. Coinciding with this was also a detachment of 239 Sqn with Mustang Is, making  Snailwell a very diverse station indeed.

With the arrival of autumn in the October of 1942, Snailwell took a very different turn, being handed over to the US Ninth Air Force Service Command who brought in the Airacobra, one of the few wartime fighters to use a tricycle undercarriage. Transferring across from Duxford, the parent airfield of Snailwell, the 347th Fighter Squadron (FS) were a brand new squadron, only being activated that very same month.

In part two we see the early American influence, and how this small grass airfield played its part in the build up to D-day.

The full page can be seen on Trail 55 – Around Newmarket.