After Part 1, we continue following the crews of 106 Squadron at RAF Metheringham. The weather and in particular fog became a huge problem for aircrew, and bomber Command in particular. Something had to be done.

During the 1940s, fog was a particular problem around Britain’s airfields, often reducing visibility down to virtually nil, meaning bombers could neither take off nor land. Arthur Harris realising the effect this was having on his bomber operations, requested investigations be carried out into a possible method for clearing the fog thus allowing bombers to operate in this appalling conditions and widening the possibilities of operations in bad weather.

Churchill, influenced by Harris’s argument, instructed his Scientific Adviser Lord Cherwell to begin action at once, and so the Petroleum Warfare Department began to assemble a team of experts – who had already carried out some investigations into the weather and methods for dealing with fog – into a team to investigate the problem. A wide ranging group of scientists and industrialists carried out research concluding that heat was by far the best method for clearing fog over the low lying landscape.

The requirement put forward was to clear a standard Class A runway of at least 1,000 yards long and 50 yards wide, and an area up to 100 feet above the ground – a staggering 1.65m cubic yards of air. Further limitations were then put on the order restricting the placement of any obstacles likely to endanger an aircraft within 50 feet of the runway’s edge.  A mammoth task but one which saw the development of the oil burning FIDO system.

The FIDO (Fog Investigation and Dispersal Operation) system was developed under the leadership a British Civil Engineer Arthur Clifford Hartley, CBE who worked with the Petroleum Warfare Department, and whose initial ideas involved using one of two streams of fuel; petroleum trialled at RAF Graveley, and Coke trialled at RAF Lakenheath.  After initial (and rather crude) tests at both Moody Down (petroleum) and Staines (coke), petroleum was found to be the better of the two fuels, and henceforth, the Gravely model was used as a template for fourteen further sites of which Metheringham was one.

Installed at Metheringham during early 1944, it saw pipes laid alongside the runway which when lit, created an initial mass of smoke. Once the system had ‘warmed up’ the smoke dissipated and the fog began to ‘burn off’ as the immense heat from the burners created an up draft of warm air.

By the war’s end FIDO had been used across England to assist in the landing of almost 2,500 aircraft most of which would otherwise have not been able to land without great danger to the crews or ground staff; it had been one of the war’s greatest success stories and was sold as such to the wider public. So successful in its outcomes, FIDO was intended to be installed at London’s major airport Heathrow, after the war, but the cost of running each system was astronomical, burning some 6,000 – 7,000 gallons of fuel in four minutes – the time it took to clear the designated volume of air. It is estimated that during its wartime use, something like 30 million gallons of fuel were burnt and whilst the cost to the taxpayer was tremendous,  it is thought to have saved the lives of over 10,000 airmen in the process.*1

Back in the air, the night of March 15th/16th saw split missions  with one section going to Stuttgart and and a further six aircraft heading to the aero-engine factory at Woippy in France. These six made up a total formation of twenty-two Lancasters, a flight that included 617 Sqn aircraft. With promises of good weather over the Metz region, it came as  a huge disappointment to find 10/10 cloud cover over the entire target.  Even with the target being identified on the H2S screen and five marker flares being dropped, the leader announced the mission scrubbed and all aircraft were instructed to return to base taking their full complement of bombs with them. So strong were the crew feelings that 617 Sqn’s leader, Leonard Cheshire, seriously considered complaining! However, despite this, all aircraft returned including those of 106 Sqn to Metheringham with only minor flak damage to ND331.

Lancaster B Mark IIIs of No. 106 Squadron at Metheringham,heading to Frankfurt. The attack on 22/23 March 1944 caused extensive destruction to eastern, central and western districts of the city. © IWM (CH 12543)

With the next few missions passing without major incident, the night of March 30th, would deal a hefty blow to the crews of 106 Sqn.

With take off starting at 22:15, seventeen Lancasters would depart Metheringham heading for Nurumberg carrying a range of 4,000lb, 1,000lb, 500lb, 41lb and 30lb bombs. Over the target, skymarkers guided the bomb-aimers as cloud was reported as heavy as 10/10 again. Searchlights and flak were evident as were fighters which attacked and damaged Lancaster ND332 piloted by F/O. Penman. The Lancaster, which claimed two enemy aircraft damaged, returned to England putting down on Manston’s emergency runway. Both the rear and mid upper turrets were out of action, one of the engines caught fire, and on landing, the undercarriage collapsed due to the enemy action. luckily though, no crewmen were injured in the sustained attack that caused the Lancaster’s severe damage.

A further Lancaster had to return early, Lancaster JB567 after suffering the failure of the port inner engine landing back at Metheringham after two and half hours into the flight. Similarly it was an engine failure that also caused the early return of JB641 this time landing three hours after departure. Three of the seventeen Lancasters were already out of action.

Meanwhile on the continent, Lancaster ND585, was reported missing, later being found to have been shot down by a German night fighter, crashing in Belgium with the loss of all its crew. On board was, at 18 years old, another of Bomber Command’s youngest ever crewmen, Sgt. Julian Mackilligin RAFVR (S/N: 1804016), who even at his young age, was already half way through his operational quota. He was buried at the Hotton War Cemetery, Luxenbourg.

Next came another two losses, Lancasters JB566 piloted by F/S. T. Hall DFM and ND535 piloted by F/O. J Starkey. Both went down with the loss of all but four crewmen. The mission had indeed been costly, forty-two airmen were out of action, seventeen of them killed.*3

By the end of the first quarter of 1944, 106 Sqn had carried out more sorties than any other 5 Group squadron (358) losing 8 aircraft in the process. This gave the men of Metheringham an average of 19 sorties per aircraft in the first 90 days.

April began with a mix of bombing and ‘Gardening‘ missions, operations that included laying mines along the Koningberger Seekanel, with mines being dropped from as low as 150 ft. Even though some aircraft reported heavy ground fire from the banks of the Canal, the mission was deemed to be a great success and all aircraft returned safely.

The month continued to go well for the Metheringham crews, but the night of April 22nd / 23rd would take another toll on the morale of the crews. That  night saw twenty Lancasters fly to Brunswick as part of  a much larger force of 238 Lancasters and seventeen Mosquitoes. The mission, whilst generally uneventful, marked the first operation in low level target marking by No. 5 Group over a large city, an aid that proved fruitless on this occasion partly due to low cloud/haze obscuring the bomb aimer’s clear sight. With varying reports of cloud from 5/10 to no cloud and haze, all bombers reported bombing on markers, but damage and ground causalities were recorded as low. 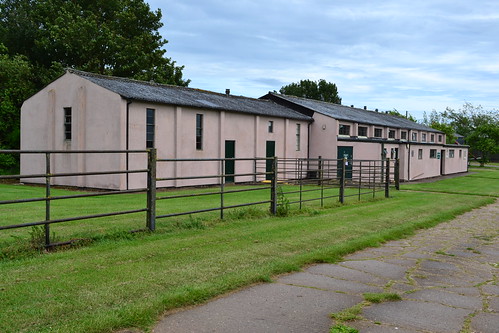 The former Gymnasium now forms part of the museum and holds a range functions including weddings and talks.

RAF loses that night were also relatively low, with only four aircraft being lost from the whole flight. Sadly though, one of these, Lancaster MK.III ‘JB567’ ZN-E piloted by F/Lt. J. Lee was a Metheringham aircraft. F/Lt Lee had only one more mission to go before completing his first tour of duty. Only two of his crew survived, being picked up by German forces and sent to POW camps. This loss only went to strengthen the idea that it was difficult, if not impossible, to achieve a full tour of duty unscathed.

The next night 24th/25th April, 1944, took 106 Sqn back to Germany once more, to Munich and another ‘clear night’ with accurate bombing reported. But, then it was Schweinfurt a city that would become synonymous with high casualties especially amongst colleagues in the US Air Force.

In part 3, we see how incredible brave acts earned a Metheringham airman the highest honour – the Victoria Cross.

6 thoughts on “RAF Metheringham – One of Bomber Command’s finest. (Part 2)”