In Part One of RAF Polebrook, we saw how the airfield had been developed, how it had been used by the first B-17s in RAF service. We saw how the first USAAF B-17 had landed setting the wheels of history in motion. We also saw the first USAAF bombing mission, and the American’s first major losses of the war. By mid 1943 a new unit, the 351st Bomb Group, was now arriving at Polebrook and they too were preparing for combat and their first mission of the War.

On May 12th 1943, the 351st would be initiated into the conflict, but it was not the most auspicious of starts to their campaign. The Eighth Air Force put up a force of seventy-two B-17s from the 4 BW and a further ninety-seven from the 1 BW. The call required all fourteen 351st BG aircraft to head for St. Omer / Ft. Rouge in France. After the lead aircraft discovered a fault in the oxygen system, it turned for home, the remaining aircraft then became disorganised and returned to base without dropping a single bomb.

The 351st would improve and go on to attack many prestige targets including: Schweinfurt, Mayen, Koblenz, Hannover, Berlin, Cologne, Mannheim and Hamburg. They would later go on to target submarine pens, harbours and ‘V’ weapons sites. Ground support was provided for both the Normandy invasion, the Battle of the Bulge and other major ground battles up to and including the crossing of the Rhine. 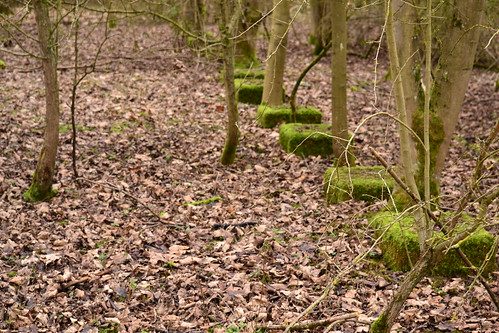 Stone foundations poke through the undergrowth.

In October 1943, the unit received the first of its Distinguished Unit Citations (DUC), with highly accurate bombing in very challenging conditions raising the standing of this new group. A second DUC was to follow in January 1944 for action deep in the heart of Germany. During an attack on Leipzig in the ‘Big Week’ campaign of 20th – 25th February 1944, two crewmen of the 510th, 2nd Lt Walter Truemper (Navigator) and Sgt. Archibald Mathies*2 (Flt. Engineer), both received Medals of Honour for taking over their stricken aircraft when both Pilot and Co-Pilot were injured / killed. B-17, TU-A ‘Ten Horsepower‘ (#42-31763), was directly hit by flak, both Truemper and Mathies nursed the aircraft back to Polebrook where they allowed the other crew members to bail out safely. On attempting to land the aircraft for the third time, it crashed (Great North Road) between Glatton (Trail 6) and Polebrook exploding, killing all three remaining crew members.

The last moments of B-17G “Ten Horsepower” (TU-A, #42-21763) piloted by Second Lieutenant Walter E Truemper  and Sergeant Archibald Mathies, as it is guided by a fellow aircraft after the pilot was severely injured. Truemper and Mathies unsuccessfully attempted to land the aircraft at Polebrook and were posthumously awarded the Medal of Honour for their bravery, 20th February 1944. (IWM FRE 4724)

It was also during this time that (Cp.) Clark Gable was stationed at Polebrook, initially to make recruitment films for air gunners, flying five combat missions in total and taking a film crew on each one. The first was on 4th May 1943 and his last on 23rd September that same year. He was initially awarded the Air Medal, and later the Distinguished Flying Cross, finally leaving Polebrook with over 50,000 feet of film on 5th November 1943. In 1944, the film ‘Combat America’, narrated by Gable himself, was shown in theatres around the United States. The film covers the 351st from their departure from the United states through their campaign. Included is footage of the collision between the two B-17s on May 7th 1943.

Another remarkable record was set at Polebrook, between 13th June 1943 and January 11th 1944, when Maj. Eliza LeDoux would lead the 509th BS (351st BG) for fifty-two  consecutive missions without losing either a single man nor a single aeroplane. An astonishing example set when at the same time other US Groups were losing aircraft at a rate of around 5%.

The 351st remained at Polebrook until shortly after VE day, returning to the US and becoming deactivated on August 28th 1945. Polebrook then became quiet once more being put under care and maintenance until its closure in 1948.

One interesting point about Polebrook was that as a station under care and maintenance, it is thought that within its hangars was the last Short Stirling to be owned by the Royal Air Force.  A MK.V aircraft, it was struck off charge in 1946, a point that ended a long and interesting career for an aircraft that has long been considered a failure. As a bomber, this was certainly partly true, the many teething problems it had suffered – a lack of altitude, poor climb rate, continued engine problems and a tendency to swing on take off – all giving it a bad name. However, it could out manoeuvre a Lancaster and it could give any fighter of its time a run for its money. By the end of its flying career, the Stirling was loved by its crews, it had been a successful transport aircraft, mining platform and had brought many POWs back home after the war. Sadly though, none survived other than as wrecks at the bottom of Fjords or as bits salvaged from various crash sites across Europe. The days of the Stirling were now over and the only person to gain any benefit from them was to be the scrap man. 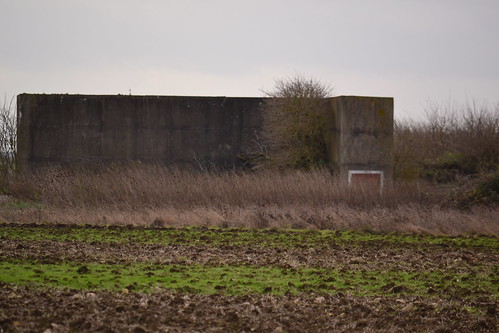 But it wasn’t quite the same for Polebrook. Post war, and with the heightened threat from the Soviet Union, Polebrook was once more brought back to life, with three Thor missile sites being constructed in the centre of the main runway. These remained operational until August 1963 when they were finally removed and the site closed off. It was sold back to the former owners, at which point the airfield’s runways were dug up for valuable hardcore and many of the buildings were pulled down.

Standing on the site now, the wind howling across the open fields, it is easy to imagine how the site must have been all those years ago. A memorial stands on what remains of the main runway, a small section of concrete, overlooking the airfield. 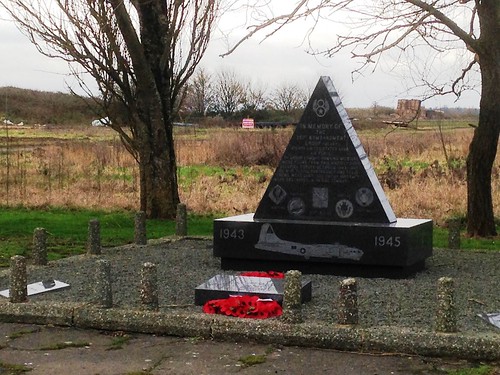 A memorial looks over the remnants of the main runway.

Two benches carved in marble with a main triangular stone are beautifully carved and cared for. Trees planted in lines mark the threshold where many bombers would have left on their way to targets in occupied Europe. A guest book is supplied in a wooden box and signatures reveal visitors from all over the world.

Across the road from here, tucked away in the corner of a field, is the main battle headquarters. Originally a sunken chamber with communications centre and raised platform, it allows observers a full 360 degree view over the site and surrounding area. Built to specification 1008/41 it is sadly now flooded and standing proud of the ground. Both access points are open to the more adventurous, or fool hardy, explorer. 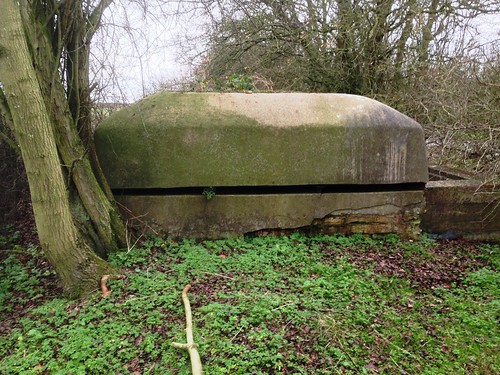 The single largest and most well-preserved building is the original ‘J’ type hangar. Used for farming purposes, it is well looked after and visible from most parts of the site. The T2 hangars that would have been opposite are gone. as has the control tower and other main structures.

The three Thor sites are still standing, used by the farmer for storage. They were (at the time of visiting) buried beneath hay bales and farm machinery. One is clearly visible however, the blast walls standing proud. Whilst careful exploring around the others reveals tracks and remains of the housing for the Liquid oxygen supply tank and hydropneumatic controllers, all ancillary buildings are gone.

The best evidence of life at Polebrook can be seen from the entrance to the ‘industrial’ site on the Lutton to Polebrook Road. This area, now woodland, is actually designated a nature reserve and access is freely available. This small road is the original entrance to the airfield and to both your left and right are the technical areas. Beneath the leaves and muddy floor, road ways still lined with kerbstones, are visible, and whilst the road way is not clear, it is possible to make out the general view of the site. 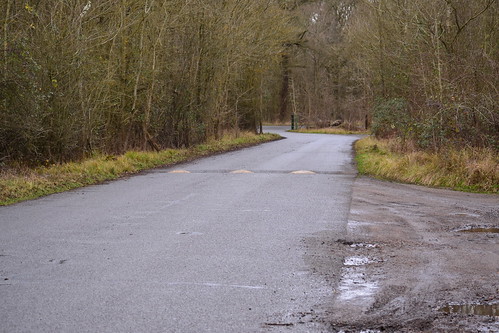 The original entrance to the airfield. The main road in the distance separates the technical areas, left and right, from the accommodation areas in the woods ahead.

Hidden amongst the trees and brambles, are a few good examples of the buildings once used. Most, are now piles of concrete, but quite a few shelters are still about and accessible. Storage tanks are open, the covers gone and so as a caution, tread very carefully amongst the bushes watching your footing.

From the entrance, to your left and a little further in, are two buildings, still shells but intact. The larger, I believe is the operations block, a smaller building next to it may have been a power or perhaps communications building. 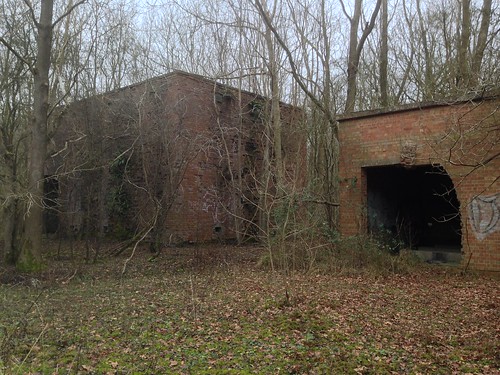 One of the various substantial remains, possibly the operations block.

Polebrook is unique in that it has/had examples of twin looped pill boxes. Here one firing window is situated above the other. A few other more standard examples are also on site some easily seen from the road or track.

I believe that the office on the site contains a full-scale model of the airfield as it was, and that the owner is more than helpful to visitors. Unfortunately on the day I was there, I was unable to take advantage of this so a return visit is certainly on the cards for later.

I was amazingly surprised by Polebrook. It is a truly an atmospheric place with plenty to see for the visitor; remnants of a time gone by lay hidden amongst the trees and brambles of the now wooded area, and little reminders of lives lost, lay beneath the leaves. A howling winter wind replaced by summer sun, carry the voices of those young men across its open expanse and through its decaying walls of history.

*3 The story of Archie Mathies appears in the ‘Heroic Tales‘. The crew list of B-17 ‘Ten Horsepower‘ was:

For further information, see the superbly detailed website dedicated to the 351st BG with photos of crews and aircraft.

If time allows, the nearby Polebrook church also has a memorial dedicated to the personnel of the base.

Polebrook was originally visited in the latter part of 2014, the full Trail can be seen in Trail 19.