In part 1 of this Trail (Trail 14) we saw how Bungay had grown from a satellite airfield into a fully fledged bomber airfield housing the 446th BG known as “The Bungay Buckaroos”.

The night of April 22nd 1944 saw the USAAF’s Mission 311, when over 800 bombers, a mix of B-17s and B-24s, were ordered to attack the marshalling yards at Hamm in three waves, each with its own designated target. The bombers were to take off from their respective bases between 17:50 and 18:21, but even before the stream arrived over the target, Bungay would bear witness to what was about to happen that night.

For the crew of #42-50306 “Dragon Lady“, it would begin at home. On take off the B24 skidded and crashed killing not only the ten airmen on-board, but two ground staff as well. Then, shortly before arriving over the Dutch coast, a B-17 #42-19818 of the 401st BG at Deenethorpe, suffered a fire inside the fuselage. As the fire took a grip of the aircraft, the pilot Lt. Roland Schellenberg put the B-17 into a steep dive during which three crew members either fell or jumped from the aircraft. Eventually, the fires were extinguished and the aircraft returned to the UK making an emergency landing here at Bungay, with nor further loss. The aircraft was salvaged at the Salvage depot at Watton, but the three crewmen who left the aircraft, were never found even after an intense RAF Air Sea Rescue Search of the area.

As the bomber stream made its way to Hamm, unpredicted winds played havoc with many aircraft, some passing beneath the higher groups as they approached the bomb release point, putting themselves in grave danger of being hit from falling bombs. Others following these leading groups also began arriving too early over the target, and were unable to distinguish landmarks due to the heavy smoke from the previous wave’s bombing.

Whilst conditions were very difficult, most aircraft did manage to bomb either their given target or alternative targets of opportunity, and considering this, results were generally good for the three Divisions. However, the troubles for the crews didn’t really start until they left the target and began their flight home.

Being a late operation, returning bombers were not locating their bases until well after dark, a situation the Luftwaffe exploited to their full advantage. A small force of Me-410 night fighters mingled with the returning bombers, and so ground radar were then unable to pick them up. Once the ground staff realised what was happening airfield lights were extinguished and crews ordered to other bases. Unseen, the German fighters gradually picked off the bombers as they tried in vain to land at darkened airstrips.  One such pilot, 2nd. Lt. Frank Baker,  luckily managed to avoid not only the fighters but another B-24 as he struggled to bring his aircraft (#42-95294) down at an alternative base. For his action that night, Baker received an Oak Leaf Cluster to add to his DFC. The entire night cost the USAAF nearly 60 men, some of these being to friendly fire in the confusion that reigned in the skies that night. Twenty Liberators had been damaged by the marauding Luftwaffe fighters, many crashing with fatal results.

The night of June 5th 1944, brought good news and a surprise for the men of the 446th. A crew briefing was called at 23.30 in which they were told they would lead the Eighth Air Force’s part in the invasion the next day. A massive operation, it would require pin-point accuracy and split-second timing to achieve its aim. Bombers were to take off in darkness and rendezvous at given heights with the 2nd Division forming up in an area between the Mersey and Humber estuaries. Take off was just before 02:00 with the 446th’s ‘Red Ass‘ piloted by Captain Charles Ryan, along with Sgt William Barlow, (G); Sgt Stuart Merwin, (R/O); Sgt Bruno Corridino, (G); Sgt Jesse Davis, (G); Sgt Joseph Parkin, (G); Sgt Howard Weaver, (Flt. Eng/G); 1st. Lt Robert McConnel, (C/P); 1st. Lt. Banks Jacobs, (B/A); and 1st. Lt. Michael Paczan, (N) taking the lead. Also on board that day was Col. Jacob Brogger the station Commander.

At 05:55 the formation was over Vierville  dropping one hundred 500lb bombs. A days long event that saw continued and repeated attacks behind the invasion line. With no Luftwaffe intervention, the event was more of a side-show for the gunners of the heavy bombers, and very few casualties were incurred by the crews. This did not mean however, that casualties were absent throughout the invasion period. On June 7th, #42-51116 crashed on takeoff on a mission to Alencon in France. In the accident eight members of the ten crew were killed.

It was also the 446th that would suffer from the little impact that the Luftwaffe had. On the next day 8th and then again on 12th near Jersey and Rennes respectively, they were attacked by a small group of Bf109s, on each day one 446th aircraft was lost.

On the 8th, the first of these two days, #42-109830 went down in the English Channel with the loss of five crewmen. The remaining five were rescued by French fishermen only to be picked up later the German forces.*2 On the second day, B-24 #42-94859 also went down with another five aircrew killed. Of those who survived, one was caught and taken prisoner, whilst the remaining four managed to evade capture.*3

As the allies pushed on thorough France, Holland and into Germany, the 446th supported them. They targeted bridges, gun batteries and enemy troop positions during the St. Lo breakout in July. They dropped supplies to the paratroops around Nijmegen in September and attacked marshalling yards, bridges and road junctions in the Ardennes, preventing German reinforcements from pushing through in December 1944 – January 1945. This support continued right up to the wars end, dropping supplies to advancing troops over the Rhine and on through Germany itself.

Through all these missions, the ‘Bungay Buckaroos‘ managed some remarkable achievements. Liberator #42-52612 of the 706th BS, “Home Breaker” flew 102 missions before returning to the US, and both the 706 BS and the 707 BS surpassed 60 consecutive mission each (62 and 68 respectively) without loss. 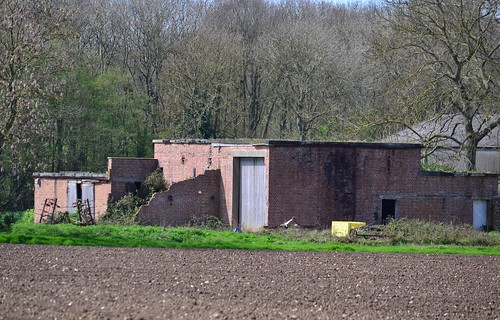 The end of the war however brought a final twist for the 446th. On April 11th, when on the return flight from Regensburg, two B-24s #42-50790 and #42-51909, both of the 706th BS, collided over the base killing all twenty-two airmen on-board. But as if that were not enough, there was another evil twist of the knife just two weeks later, on the 26th, when two days after their final mission, a transition flight crashed killing a further six crewmen. It was a tragic and sad end to the Group’s war.

In all, the 446th had carried out 273 missions in total, dropping just short of 17,000 tonnes of bombs for the loss of 68 aircraft in combat and 28 through accidents and other incidents. Yet with all these remarkable achievements, the Group were never awarded any recognition in the form of a Citation or Group award.

With the war at an end, the 446th would depart Bungay for home. The aircraft departing mid June via the southern routes and the ground parties departing on the Queen Mary from Greenock in early July.

Bungay airfield, then surplus to US requirements, was transferred over to the Fleet Air Arm and renamed HMS Europa II on September 25th 1945. Bungay formed one of a small cluster of former USAAF airfields handed over to the Fleet Air Arm in preparation for the war in the Pacific. Acting as a satellite for HMS Sparrowhawk (formally RAF Halesworth another US airbase), it fell under the command of  Lt. Csr. R.J. Hanson D.S.O., D.S.C. but due to the end of the war against Japan, it only operated until May 1946 when it was handed back to the RAF and placed under the control of 53 Maintenance Unit. A further change in management saw it pass to 94 Maintenance Unit in November 1947 who stored surplus munitions along its runways and inside its buildings. A range of ordinance, from 250lb bombs to 4,00lb bombs, cables, flares, mines and German munitions were all stored here before disposal.

In the early 1950s the site was gradually run down, no longer needed by the RAF and finally closed in 1955. It was eventually sold off in 1961 and was returned to agriculture. As it closed, the last main gate board to adorn the site was rescued and now rests in the Norfolk and Suffolk Aviation Museum a short distance away. 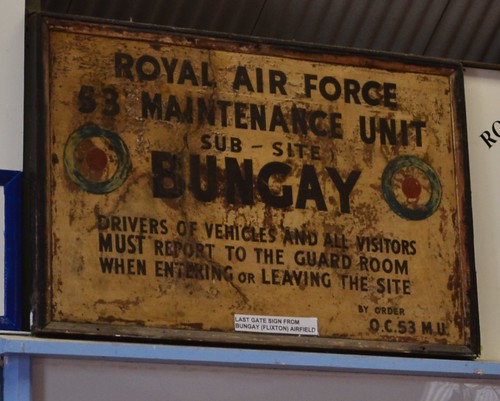 After that some private flying did take place at the airfield, the Martlesham Heath Parachute Club using it with a variety of aircraft types, but this was short-lived. Gradually the site was taken over by agricultural uses, the runways and perimeters tracks being all but removed, the buildings allowed to deteriorate with many being removed over time. Time had gone full circle, and Bungay airfield is no more. In memory of those who were stationed here a memorial stone in the shape of a B24 tail fin marks the site of the former airfield. Just one of several memorials in the local area.

Tucked away down a country lane, Bungay is best found from the B1062. Stopping on the small country lane, Abbey Road, you can see along what is left of these parts. Now predominately agriculture, fields stretch where the Liberators once stood, trees adorn the admin areas and hard standings support tractors and other modern farm machinery. Much of what remains is rooted on private land, and many of these buildings contain murals created by those who were stationed here in the latter part of the war. Dilapidated huts, they are gradually falling into ruin, overgrown with bushes and trees.

A well presented memorial and garden marks the site, and the Airfield entrance is now a farm along with its associated dwellings. A small plaque signifies a crash site at Barsham some 3 miles east and a superb museum at nearby Bungay  houses a range of artefacts associated with the 446th and other Eights Air Force groups. The nearby church holds a roll of honour and its own memorial to the group. A former rest room for the crews is now the local Community Centre and it too holds a plaque in memory of the 446th. 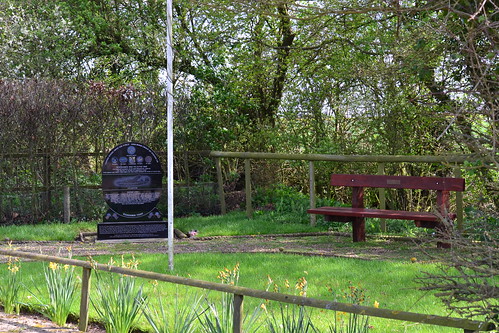 A peaceful memorial garden to the 446th marks the site of Station 125.

A website dedicated to the 446th has further details of the crews and aircraft.