In Trail 14 we visit an airfield that was built in the mid part of the war and one that took some time to establish itself as a front line bomber station. However, it is one that would have its own share of problems, heroic acts, records and sacrifice.  In the second part of this trip, we visit the former airfield RAF Bungay.

Bungay airfield lies in Suffolk, above an area known as the Waveney Valley, about two miles from the village from which it takes its name and fifteen miles from Norfolk’s county town of Norwich. It served under a variety of names: HMS Europa II,  RAF Flixton,  RNAS Bungay and USAAF Station 125. However, throughout its short life, it remained primarily under the control of the United States Army Air Force as a heavy bomber station designated Station 125.

Construction began in 1942, by Kirk & Kirk Ltd, but the work would not be completed for at least another two years until the spring of 1944. Even though the site was unfinished, the first units to be stationed here, would be so in the autumn of that same year, 1942.  Initially designated as a satellite for the heavy bombers of RAF Hardwick, it would be some time before Bungay would establish itself as a fully operational front line airfield.

With the invasion of North Africa dominating the European theatre, a build up of military might would see many of Britain’s airfields taken over and utilised for both men and machinery. A part of this build up was the arrival of the twin-engined units the: 47th, 310th, 319th and 320th BGs operating the North American B-25 Mitchell. The 310th BG initially arrived at RAF Hardwick, over September and into October, where they would continue their flying training before departing for North Africa. The 310th consisted of the usual four Bomb Squadrons: 379th, 380th, 381st and 428th BS, and it was whilst training at Hardwick that one of these squadrons, the 428th, would move across to Bungay. Their arrival here was no more than as a dispersed site, allowing for free movement of aircraft in the busy skies over this part of East Anglia. At the end of their short stay, they would rejoin the main Group and depart for the warmer climates of North Africa.

The next group to arrive was something considerably bigger but also posted from nearby RAF Hardwick, the 329th BS of the 93rd BG with their B24 Liberators. Known affectionately as ‘Ted’s Travelling Circus‘ (after the CO, Colonel Ted Timberlake), the 93rd BG earned their unique name as a result of their constant moving around, continuously being spread across, what must have seemed, the entire European and Mediterranean theatres of war. Often split between the two, rarely were the Group ever together for any length of time.

During this period UK-based units of the 93rd at Hardwick began transferring to the 2nd Bombardment Wing, where they began training for ‘special duties’. Gaps in the 329th BS were filled with crews from the other 3 squadrons of the Group (328th, 330th, 409th) and were moved here to Bungay. Once here, the aircraft were fitted with the British ‘Gee‘ system and crews trained in its use. A remarkably accurate system of radio navigation, it was devised initially by Robert Dippy as a short-range aid for blind landings, but its success encouraged its development for a much greater use by the  Telecommunications Research Establishment (TRE) at Swanage. 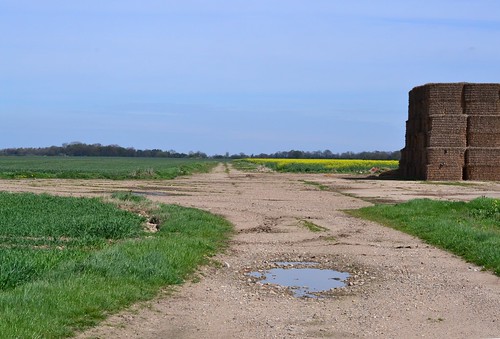 Bungay was Initially planned to equip the 44th BG, but the 329th were chosen over them and within a very short time the crews were ready, and ‘Moling’ mission could now begin. Designed as a ‘blind bombing’ utility, and because of fears of the system falling into enemy hands, heavy cloud cover was needed for operations to go ahead. Such conditions occurred early in 1943, on January 2nd, when four B-24s of the 329th set off from Bungay for the Ruhr. Unfortunately, as they neared the target, the cloud cover broke and the flight was exposed. This exposure prevented Gee from being used as it was intended, and the aircraft returned both without bombing and without using their Gee successfully. The weather again proved to be the Achilles heel in the planning on both the 11th and 13th January, when similar conditions were experienced and again all aircraft returned without bombing. These erratic weather conditions carried on well into March, the last attempt being made on the 28th, after which it was decided to abandon the idea, and ‘Moling’ operations were cancelled.

It was not a complete disaster for the 329th though, the experience of flying over occupied territory and using blind bombing equipment, meant they were able to transfer to a new Pathfinder role, now skilled in equipment not known about in other units of the USAAF.

At the end of these trials, and in the absence of her sister squadrons, the 329th joined up with the 44th BG in a move that led to their imminent departure from Bungay.

Following their departure, the work on Bungay’s construction continued. Built to Class A specifications, it would have three concrete, tarmac and wood chip runways intersecting to form the ‘A’ frame. Thirty-six frying pan and fourteen spectacle hardstands provided dispersed aircraft accommodation and two T2 hangars provided covered space for maintenance and repairs. The main technical area lay to the west of the airfield, the bomb store to the east and the main administration site (site 2) across the road to the west. As a dispersed site, many of its accommodation areas would be hidden amongst the trees beyond here. Linked by a maze of footpaths and small roadways, there were two communal sites (sites 3 and 4), seven officer and other ranks sites, a WAAF site, a sewage works and a sick quarters. In all it could accommodate around 3,000 men and women of mixed rank. Updating of the watch office included the addition of a Uni Seco control room (5966/43) by anchoring it to the roof of the already built observation room. By late autumn 1943, it was completed and the site was handed over to the 446th BG (H), Bungay’s most prominent resident, who would become known as  “The Bungay Buckaroos”.

Their arrival here commenced on 4th November 1943, with four squadrons of B-24s – the 704th, 705th, 706th and 707th – all of which formed the larger 20th Combat Wing of the Second Bombardment Division, Eighth Air Force. The remainder of this wing included those of Hardwick’s 93rd BG and Seething’s 448th BG.

The 446th’s journey took the ground echelons from Arizona, to Colorado and onto Bungay via the Queen Mary,  and the air echelons the southern air route via Brazil and Marrakesh. Under the command of Colonel Jacob J. Brogger, they would begin operations on the 16th December 1943. Throughout their term here the 446th would attack prestige targets including: U-boat installations, Bremen’s port, the chemical plants at Ludwigshafen, Berlin’s ball-bearing plants, the aero-engine works in Munich and the marshalling yards at Coblenz. In addition to these, the 446th would support the Normandy invasion, the break out at St.Lo, and drop supplies to the ground forces at both Nijmegen and in the snowy conditions of the Ardennes.

This remarkable list of strategic targets would begin with Bremen. The mission would see twenty-three heavy bomber groups along with a Pathfinder group drop over four thousand 500lb general purpose bombs and over ten thousand 100lb incendiary bombs. During the raid four B-17s would collide in mid-air and as for the 446th, they would not escape without loss. Two of their aircraft would crash, one of which, a Ford built B-24H-1-FO Liberator #42-7539, “Ye Old Thunder Mug“, would run out of fuel and crash near to its home airfield at Bungay.

The 446th would unusually send just one aircraft to Bremen four days later. This aircraft, a 704th BS Liberator, #42-7494 “Bumps Away” was hit by flak over Texel, one of the Dutch Wadden Islands. The strike sheered the tail turret sending the aircraft momentarily out of control. After the pilot (Second Lieutenant Thomas B. Long) stabilised the aircraft, it went on to complete its mission only to collide with another B-24 of the 392nd BG on its return journey. The collision sent the Liberator crashing into the North Sea killing all those on board*1.

Then on the 22nd, the 446th were sent back to Germany, this time Osnabruk. On this mission, B-24 #42-7611, another 704th BS Liberator thought to be ‘Silver Dollar‘, was hit by falling bombs from above. The aircraft fell from the sky killing eight of the crew with another two surviving, both being taken prisoner by the Germans. On board this aircraft was right waist Gunner Sergeant Walter B. Scurlock who had survived the crash landing in “Ye Old Thunder Mug” earlier that month on the 16th. It had been a difficult start for both Sgt. Scurlock and the 446th.

January 1944 then took the men of the 446th to Kiel, but the cold and icy winter would be as much of an enemy to the group as the occupying German forces were a short distance across the sea. With several missions being curtailed during the month, those that did take place were prone to their own problems. On the 7th, the Bomb Group was unable to rendezvous with the 392nd and returned without bombing; on the 11th, the mission to Brunswick was recalled, again due to the bad weather. Following a Noball mission to St. Pierre-des-Jonquies on the 14th, the group were grounded for a week after yet more bad weather closed in. The continuing poor conditions prevented further immediate attacks,  but the 28th would see the weather ease and the start of four days of consecutive flights to Frankfurt, Brunswick and two further Noball targets.

February, March and April were much more conducive to flying activities but the weather still played its part in cancelled or aborted operations. As the lead up to D-Day began, breaks in the weather allowed for strategic targets to be hit, airfields and marshalling yards, along with yet more Noball targets.

April 22nd 1944 saw the USAAF’s Mission 311, a mission that would become notorious in the history of the Eighth Air Force. On this day, the Eighth would lose more aircraft to enemy infiltrators than at any other time in its wartime history. The mission was to attack the  marshalling yards at Hamm, which was considered a highly important strategic communications target, especially in the lead up to the allied invasion of Normandy. Hamm was especially chosen as it was said to be capable of dealing with up to 10,000 railways wagons a day, making it the busiest marshalling yard in Germany, and a prime target for the heavy bombers of the Allied forces.

On that particular day, over 800 bombers, a mix of B-17s and B-24s, were ordered to attack in three waves, each with its own designated target. The bombers were to take off from their respective bases between 17:50 and 18:21, but even before the stream arrived over the target, Bungay would bear witness to what was about to happen that night.

In part two we shall see what happened on the night of April 22nd and how Bungay developed during the closing stages of the war and beyond.