In Part 1, we saw how, at the end of 1943, the 93rd BG stationed at Hardwick had been ridiculed by B-17 crews, they had been spread far and wide and had won a hard fought DUC for their action over the Polesti oil fields. As 1943 turned to 1944, was their luck about to change?

1944 brought more similar events. January saw ‘No Ball‘ missions, attacks on the V-weapon sites across northern France. A turn that pleased some of the tired crews of the USAAF but one that was considered unnecessary and unlikely to turn the tide of the war by many others. January also saw the build up to February’s ‘Big Week’ campaign, a series of RAF and USAAF operations to destroy Germany’s aircraft manufacturing plants.

A dramatic picture taken shortly after a B-24 of the 93rd BG crashes on take-off at Hardwick on March 3rd 1944. Surprisingly the crew were all able to escape before the bombs exploded. (IWM FRE 3779)

In the following month, April 1944, the US Air Force was to suffer its greatest loss ever to intruders, Luftwaffe night fighters who followed the heavy bombers home, picking them off one at a time until they reached their bases in England. The bombers, many badly damaged or low on fuel, were easy pickings as they tried to land in the early evening darkness. Illuminated by navigation lights, the bombers could do little to protect themselves as the Luftwaffe pilots waited until the most opportune moment to unleash their cannon and machine gun bullets into the bombers. The mission to Hamm in Germany would mean the bombers were arriving back later, and once it was realised that the Luftwaffe were there, runway lights were extinguished, navigation light were put out and aircraft almost left to their own devices – the risk of collision increasing ten fold as a result of these actions. Two aircraft at Hardwick were attacked that night, both sustaining minor damage but thankfully suffering little in the way of long-term harm. Whilst a number of airfields across East Anglia did suffer badly that night, Hardwick on the face of it, got off lightly, with minimal damage being inflicted by these intruders.

June saw the Allied invasion of occupied Europe. The 2nd BD sending almost 550 B24s to the Normandy area with the 93rd bombing strategic military targets such as gun emplacements and bridges around Cherbourg. They would then go on to support the breakthrough at St. Lo and drop supplies to troops as they advanced across occupied Europe.

High numbers of operations during the summer of 1944 led to many crews achieving their 200 mission mark, each one showing the strain of continuous operations over occupied France.

During the failed operations in Market Garden, the 93rd supported the airborne troops dropping supplies on the 18th September. Then over the winter of 1944-45, they would support the troops in the Ardennes, a role they continued as the allied forces pushed across the Rhine and on into Germany itself.

By April 1945, the end was in sight and the 93rd were officially withdrawn from operations, performing their last mission on 25th April 1945.

Their stay post war would not be prolonged. They departed Hardwick over May and into June 1945, at which point the airfield was handed back to the Royal Air Force. The RAF retained the site until the early 1960s when it was eventually sold off, quickly returning to agriculture, a state in which it remains in today.

By the time they left, the 93rd had conducted 330 missions (41 from North Africa) from Hardwick, which added to the 66 already carried out from Alconbury, meant this was to be the highest number of operations of any Eighth Air Force Group. They flew 8,169 sorties dropping over 19,000 tons of bombs across Europe.  They were the oldest Bomb Group of the Eighth Air Force, having the first bombers to fly both 25 and 50 missions – ‘Boomerang‘ and ‘Hot Stuff‘ respectively. They had also performed in numerous theatres: the Atlantic (Anti submarine theatre), Egypt-Libya, Sicily, Normandy, the Rhine, and over wide areas of central Europe making them the most travelled Group of the Eighth Air Force. They were awarded two DUCs, and post war went on to serve well into the early 1950s. This achievement made them the only USAF Group that had not been inactivated since its original formation in 1942.

Their departure from Hardwick marked the end of an era, a move that left an enduring mark on the local area. The Liberators may have moved on, but the history of the 93rd lives on to this day though the displays and actions of those who preserve Hardwick’s small number of buildings for the benefit of future generations.

While the airfield was returned to agriculture, proposals were put forward to transform part of the site into a domestic waste site. These were later withdrawn though after investigations into the geology of the site revealed that such actions could lead to toxins entering the water course below ground. A potentially lethal release with serious consequences. 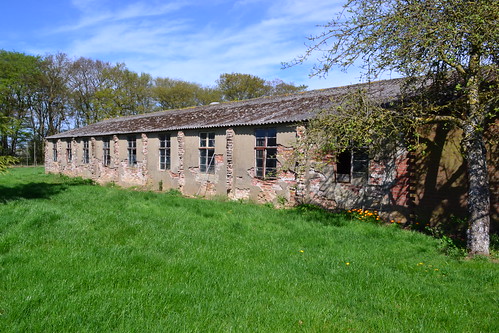 Today there are few physical remains of the airfield, a few scattered buildings amongst the trees, a small section of runway and a smattering of Nissen huts that form the recently created 93rd BG Museum. With such a large site, all of which is on private land, it is difficult to investigate individual parts in any depth. However, this does not lead to an uninteresting visit.

The airfield is separated by the local road, to the west are the runways and the east the admin and accommodation areas. To the west, one section of the main runway still exists in good condition and for a very special reason; the local farmer (Hardwick Warbirds) uses this to fly his TWO restored P-51Ds and other ex-military aircraft! Seen over the airfield on special occasions, he performs small displays for ‘open days’ and other museum related activities.  Looking across the westerly side, one can see a lone windsock catching the morning breeze. This windsock marks the location of  the remaining runway sections part of which can be seen easily from the public road.

There are two entrances to the eastern side, both go across private land, but the landowners are happy (in my experience) to allow free passage on both. I approached from the Barondole Lane entrance and headed to the aptly named ‘Airfield Farm’. Once there, I knocked at the farm door and gave notice of my intentions to the farmer’s delightful wife. She was happy for me to wander, and even took time out to explain the layout of the remaining buildings. She took time to show me the memorial that now stands outside the farmhouse, and then pointed me toward the museum further along the farm track and suggested I take a drive down even though they were not fully open for business. A truly lovely and helpful lady! 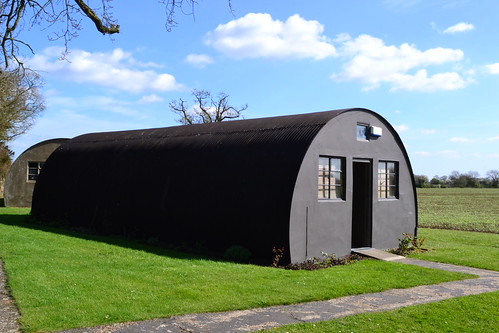 The original Nissen huts serve as a superb Museum.

The family now own a large part of the airfield and its remaining buildings. They have utilised some of these as part of the farm many of which now house chickens. In one of them, is a small clear block with a Liberator suspended inside, marking it as an original. Behind here are further building’s remains, in particular the gas training room, condemned as unsafe it is too costly to have demolished.

Driving on, you arrive at a small collection of Nissen huts, this forms the museum. Each one is original and in very good condition. Here they hold a huge range of memorabilia, uniforms, photographs and aircraft parts. This museum is a real gem quietly hidden away in this corner of Norfolk.

One of the volunteers at the time, himself ex-USAF, (RAF Bentwaters), told me stories about the site, the history of all the parts they had gathered and then he gave an amazing personal guided tour even though they were closed. He explained how at the end of the war, as the Americans pulled out, large trenches were dug and filled with unwanted bicycles and other artefacts that they were not allowed to give away for fear of disrupting the local economy – what you wouldn’t give for a heavy-duty metal detector! He also showed me spent cartridges that were used to light the Nissen hut fires, all found in the topsoil of the adjacent field! 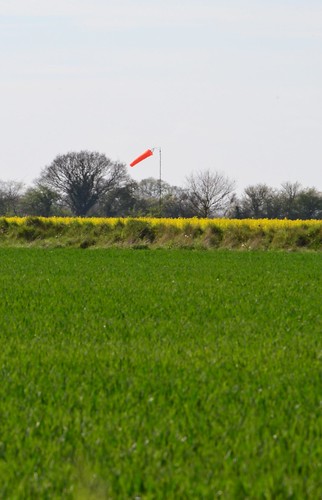 A lone windsock marks the runway.

After you leave the museum, going back by the same track, turn left out onto the road and then right, you come across another one of the entrances to the original airfield, considerably smaller in size it is now only a  farm track. It looks so insignificant shrouded by tress and bushes that it is difficult to imagine what went on here all those years ago.

Hardwick once bustled with airmen and personnel, several thousand in all, but with so much gone there is little to show for it now. It is however, good to know that flying still does take place here, and that through the museum,  the dedication, sacrifice and bravery of those young men in their B-24s shall live on for many years to come.

Hardwick was originally visited in 2014, it appears in Trail 12.

More information about Hardwick and museum details can be found on the museum website.  When visiting the museum, check opening times as they are limited, but do spend a good half-day or more here. It will be worth your while.