After part one of RAF East Wretham, we see how the poor fortunes of the Czech squadron of Bomber Command were left behind, a new breed of aircraft had now arrived in the form of the US fighter Group’s P-47s and P-51s. After the departure of Bomber Command, the site was turned over to the USAAF and renamed Station 133.

With this change came a number of modifications to the airfield. Temporary Pierced Steel Planking (PSP) was laid, more concrete pathways added and the site accommodation improved generally. The work continued for several weeks whilst the personnel of the newly formed 359th Fighter Group (FG) were gathered together in the United States, finally shipping out across the Atlantic in the October 1943.

Only being recently manned, the 359th were truly a new group (although some pilots were drawn from other established combat units) being formed of the 368th, 369th and 370th Fighter Squadrons (FS). Arriving from Westover Field Massachusetts in the October 1943, they were one of the last units to join the Eighth Air Force with P-47 Thunderbolts; a move that bolstered fighter numbers to some 550, trebling the Eighth’s total number of fighters in only a matter of weeks.

By December they were combat ready, and their first mission took place on December 13th 1943 – an escort mission protecting  heavy bombers as they attacked airfields in France. During the mission, thirty-six aircraft of the 359th carried out fighter sweeps in the  Pas-de-Calais area without loss and without a single ‘kill’, a rather calm opening to their European war. On the 20th, they undertook their second mission, another escort of heavy bombers to Breman. Joining them were the 4th FG, 56th FG, 78th FG, 352nd FG, 353rd FG, 356th FG, and for their first time the 358th FG all flying P-47s. For the fighters it was another ‘uneventful’ mission with only minimal losses, but for the heavy bombers it was their first encounter with Me-410s, and their time-fused, aircraft launched missiles.

During March 1944 a special squadron was formed commanded by Capt. Charles E. Ettlesen of the 359th. Known as “Bill’s Buzz Boys”, the purpose of the unit was to develop ground-attack tactics as so few of these had been truly successful up until now.

The group tried many new ways of attacking enemy airfields, and in the month they were together, they succeeded in destroying or damaging numerous aircraft, blowing up several hangars, locomotives, barges and other small boats in their attacks. During one of these attacks on the airfield at Chateudun, Capt. Ettlesen hit a high tension wire which cut half way through his wing. He manged to fly the P-47 back to England landing at RAF Martlesham Heath in Suffolk, trailing a good 30 feet of wire behind him! On April 7th, the unit’s four flights returned to their respective groups, and the new tactics learned were taken to RAF Millfield, the brainchild of General Quesada to train pilots in the art of ground attack.

Capt Charles C. Ettlesen 369FS, 359FG, headed the specialised ground attack unit. After returning to East Wretham he was last seen going down to strafe a Locomotive north of Gotha, 9th Feb. 1945. Classed as MIA he was never heard from again. *2

The 359th at East Wretham continued on with bomber escort operations throughout the early stages of 1944, and then in the April, they began to convert to P-51 Mustangs, a change that involved major retraining of both pilots and ground crews. Used to the air-cooled Douglas Wasp engines of the P-47s, they now had to convert to liquid cooled Merlins. To prepare mechanics for the forthcoming Mustangs, ‘sample’ P-51Bs were sent out prior to the shipment to allow for a smooth transition from one aircraft to the other.

By May, the 359th were ready with their P-51s and their first foray into enemy territory took place on the 5th. Not unlike their first mission with P-47s, it was an escort mission to attack targets in the Pas-de-Calais and Siracourt areas in ‘Noball‘ operations. Like the first, it also was uneventful, cloud cover preventing both allied bombing or Luftwaffe intervention.

Ground attacks were incredibly dangerous, and the summer of 1944 would reinforce that fact. In May pilot, Major George “Pop” Doersch, whose daring would eventually take his ‘kill’ rate into double figures, flew too low to the ground in a strafing attack on an airfield near Rheims. In the attack his propeller struck the ground causing the blades to bend at the tips. Fortunately and using all his skill and strength, he managed to nurse the aircraft (P-51B) back to Manston where it landed without further incident.

Major George Doersh who took his P-51B too close to the ground bending the propeller tips. (IWM)* 3

As D-Day approached, the 359th focused on strafing ground targets in and around the Normandy area; railway locomotives and communication lines were all now very high priority. During the invasion itself, the 359th escorted the heavy bombers across the channel, and whilst over France, they took the opportunity to continue with these opportunist attacks.

With the new P-51s they were now able to fly deeper into the heart of Germany and as far east as Poland. It was during these later stages of the war that the 359th really began to make their mark, participating in some of the biggest bombing missions of Germany, including those of: Ludwigshafen, Stuttgart, Frankfurt, Berlin, Mersberg, and Brux.

On 11th September 1944, the green nosed Mustangs of the 359th were finally rewarded for their efforts when they received the Distinguished Unit Citation (DUC) for their action over Mersberg. After attacking over 150 Luftwaffe fighters they also went on to destroy seven  locomotives on their way home. The detailed Citation highlights the bravery and dedication shown by the pilots of the 359th summing up with:

The conspicuous intrepidity, aggressive tactics and esprit de corps displayed by the pilots of this unit on this occasion accounted for the destruction of thirty-five enemy aircraft and contributed to the safe escort of the attacking bombardment formations. The actions of this unit reflect the highest credit upon the 359th Fighter Group and the Armed Forces of the United States.

The determination shown by the 359th resulted in many outstanding pilots. One, Maj. Raymond “X-Ray Eyes” Wetmore became the 359th’s (370th FS) top ace scoring 21 victories (plus 3 on the ground)- his last being an Me 163. Flying latterly  in P-51 #44-14733, Wetmore, like Doersch had a very lucky escape when his aircraft was hit by friendly fire during the Battle of the Bulge. By putting the Mustang into a steep dive he was able to extinguish the fire and return home safely. Flying in three aircraft all called “Daddies Girl” after his daughter, he received numerous awards and by the end of the conflict had completed 142 missions covering 563 combat hours. 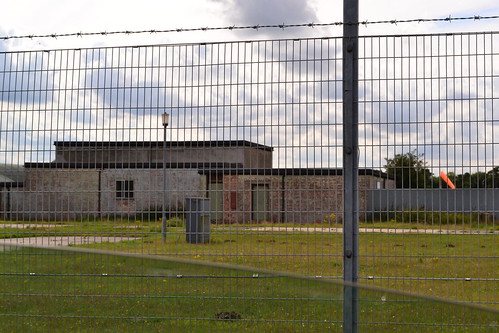 The old part remains cordoned off.

This attitude to the war, gave the 359th a worthy credit of 263 aircraft shot down with over 100 more being destroyed on the ground. In the 346 missions they flew, they lost a total of 106 of their own aircraft.

Along with further support operations in France and Holland, the 359th went on performing ground attack missions as the allied forces entered Germany. At the war’s end flying wound down, and the USAAF remained at East Wretham until the November of 1945 when the 359th departed, returning to the States and inactivation. With this, no further flying took place at East Wretham and the skies would fall quiet once more.

The airfield then reverted to 12 Group (RAF) ownership, then in May the following year, it was handed back once more to Bomber Command. Within a month the site was handed over to the Technical Training Command and finally East Wretham became a Polish resettlement camp for those personnel who were unable to return home. When they had all finally been moved on, the majority of the site became what it is today, used by the British Army as part of the massive Stanford Practical Training Area (STANTA) for manoeuvres and live firing training. 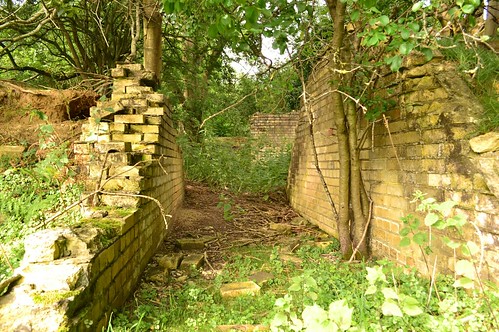 Today most traces of the airfield as it was are gone. A number of buildings notably a T2 hangar and several Nissen huts survive on what is now farmland or in the military camp. The unique Watch Tower was demolished after the war as were many of the other ‘temporary’ buildings. Now used by STANTA, a mix of old and new are intertwined with the majority standing on inaccessible military ground. Parts of the perimeter track and hardstands do exist, many overgrown or broken up by the weather and weed growth.

Perhaps the best and by far most accessible examples of East Wretham’s past, is the bomb site which forms part of the East Wretham Heath Nature Heritage Trail. Access is to the south of the site just off the main A1075, Thetford Road. A two-mile walk through Heath land, it takes you right through the original bomb store. An area of natural beauty, famed for its wetland and ancient flints, you can easily find the many blast walls and small fusing buildings still there. Also traceable are the tracks that once took bomb loaded trailers to the airfield across the heath. Many now buried under the acidic soil, their existence evident in exposed patches of bare concrete. 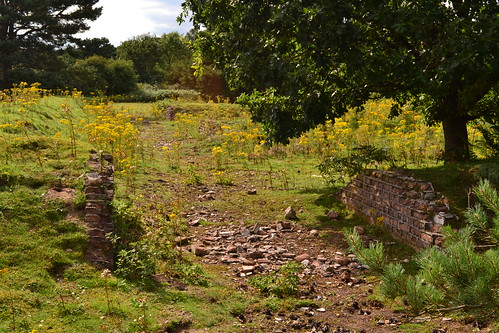 The decay is evident throughout the bomb store.

All these stores are being gradually reclaimed by nature, trees and rabbit holes have both taken their toll, the layout is still discernible and whilst much of the brickwork is ‘intact’, the warning signs are there and the wartime structures are crumbling fast.

A small airfield, East Wretham was never considered the most ‘homely’ of sites. Often wet and boggy, it was one of the less well-known and less famous places to be used. But the courage and determination of those who served here both RAF and USAAF, went a long way to helping defeat the tyranny that stood facing us across the small section of water not so far away.