After Part 1 of ‘RAF Boulmer – Sophistication and intrigue’ we see how Boulmer developed during and after the Cold War. From a small decoy airfield, to a training facility for fighter pilots of 57 Operational Training Unit it then closed at the end of World War 2. Laying dormant for a while, flying would return, and Boulmer would become one of the most sophisticated RAF facilities anywhere in the United Kingdom. 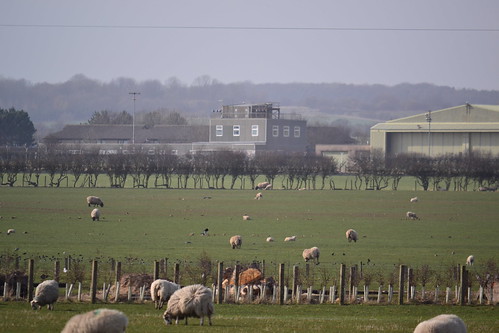 After this, the RAF had no need to retain Boulmer, and so it was placed into care and maintenance. But then, in the early 1950s with the Cold War heating up, Boulmer was put back into action but not as an operational airfield flying front line aircraft, but as part of a sophisticated network of radar stations monitoring British airspace. To accommodate this new equipment, a new part to the of the airfield was opened up, located on both new land and former domestic sites to the north-west of the main airfield. This new construction took the name of the airfield but remains separate from its namesake, and well guarded from prying eyes.

During this time Boulmer would use  Linesman Passive Detection equipment, *1 to detect jamming targets in mass formations. An innovative design they were eventually removed as new and more modern equipment came into operation. In conjunction with this was the primary radar, the Marconi Type 84 and 85 search radars. These massive structures used  antenna reflectors measuring some 60 feet wide by 22 feet high, completing a full rotation four times every minute.

It was at this time, in the mid 1960s, that Boulmer the airfield, would once again see military flying take place. But by now the hard runways had been removed, and Boulmer’s gain had sadly been Acklington’s loss.

The closure of RAF Acklington meant that the Search and Rescue helicopters of 202 Sqn ‘A’ flight, would be moved into Boulmer to carry out Search and Rescue operations over the eastern regions of England and Scotland.  The Whirlwind HAR 10s of 202 Sqn were spread far and wide in a complex range of changes that saw them move as far a field as Coltishall, Leuchars, Lossiemouth, Manston and Port Stanley. These moves placed many stresses on the unit, and with the reduction in operational aircraft, Boulmer’s search area became much bigger.

A series of updates over the coming years meant several changes to the  various sites at Boulmer.  For a short period between 1968 and 1974, Boulmer Radar Station (Lesbury) was closed, as upgrading took place which saw ‘electronic’ warfare, and later a computerised interception control system, added. By the 1990s mobile radar was becoming more widely available and the giant Type 85 radar was dismantled and replaced by modern 3-D screening and automated tracking radar. Part of this network being housed on part of the former RAF Brunton.

In 1975 the robust Search and Rescue helicopters on the former airfield began being replaced by the successful Sea King HAR-3, an aircraft they operated for a further forty years in the Search & Rescue role. In 1978, the Sea King was withdrawn from some of these 202 Sqn operations and replaced themselves by the Wessex HAR 2, but three Sea King helicopters continued on at Boulmer, being the last aircraft to fly here under Military control. In conjunction with these changes, the main headquarters of 202 Sqn also moved into premises at RAF Boulmer, giving a new and extended lease of life to the former airfield.

In this new role Boulmer would regularly bear witness to accidents and fatalities. On Sunday 17th May 1987, an ex Boulmer airmen F/Sgt. Philip Scott crashed in an Steen Skybolt he had built himself at Boulmer. The aircraft ploughing into the ground killing  both F/Sgt. Scott and his passenger Cpl. Martin Leitner. It was suggested that a suitcase on board the aircraft had restricted control column movement leading to the crash.

In July 1989 an RAF Sea King from Boulmer was involved in a rescue mission to save two downed military airmen. A Tornado F3 of 23 Sqn RAF Leeming crashed into the sea 35 miles off Tynemouth, both airmen ejected, and whilst the navigator was saved, the pilot F/Lt. Stephen Moir was killed, trapped under his parachute in the cold waters of the North Sea.

Another RAF Leeming Tornado F3 (11 Sqn) got into difficulties later in 1994, the crew ejecting again but not before managing to transmit a distress call. This time both airmen were pulled from the water and taken to hospital with minor injuries, RAF Boulmer crews being on the spot within minutes.

A year later, 1995 saw another rescue mission by a Boulmer Sea King, when two Tornadoes collided 60 miles off the coast of Berwick-upon-Tweed. All four aircrew survived with two ejecting from one aircraft at the scene, whist the second (ZE773) was gingerly nursed back to RAF Leuchars. The aircraft landed without further incident even though it had no hydraulics or navigational aids.

In 2003 the Government put forward plans to close Boulmer, but protests from those opposed to the end of search and rescue operations led to a reprieve, and Boulmer would live a little longer.

Since April 1st 1983 Search and Rescue units had answered 34,122 call-outs during which time 26,916 people have been rescued from both the sea and land*2.  Boulmer’s operations had now ended, raising a feeling of great sadness in the local community, a community who had regularly witnessed the S & R helicopters over their small village. 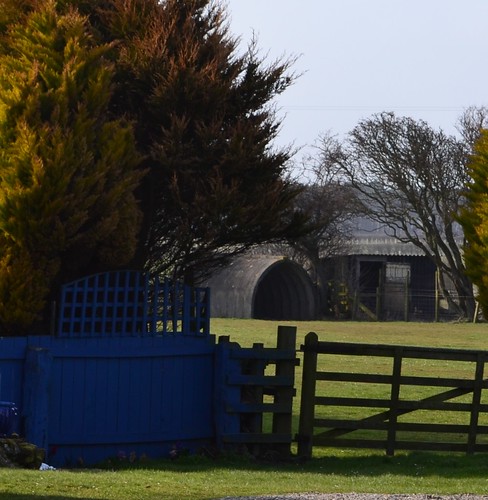 Many of the private gardens around the airfield use shelters for storage.

During this time the Sea Kings had operated in some of the most treacherous of conditions and some of the most important events in recent history. This included rescue operations in the Lockerbie bombing, the collapsed North Sea oil rig ‘Alexander Kielland‘ and the Carlisle floods.

Boulmer’s name would not end there though, now forming the backbone of Britain’s Air Defence Network as the headquarters of the Air Surveillance and Control System Force (ASACS), it monitors the UK and NATO airspace 24 hours a day, 365 days year.  As part of a sophisticated network of mobile and fixed radar monitoring stations, it is linked to European based networks ready to intercept any threat or unidentified aircraft entering British Airspace. Boulmer remains the headquarters of this force with No.1 Air Control Centre currently at RAF Scampton in Lincolnshire, but due to return to Lossiemouth once Scampton has closed and refurbishment at Lossiemouth are complete. Together their information can lead to the dispatch of QRA Typhoons from RAF Coningsby or RAF Lossiemouth depending upon the direction and location of the threat.

Whilst the main airfield site is still owned and used by the RAF, there are currently no flying operations taking place. High tech training is the order of the day, Boulmer being home to the RAF School of Aerospace Battle Management (SABM). This is a worldwide centre of excellence leading battlespace management training and education for not only the UK’s Armed Forces, but NATO and other foreign military personnel as well. A range of associated technical units also serve and train here, giving Boulmer one of the most sophisticated organisational groups in RAF service. There are currently some 1,000 Service, civilian and contracted personnel working at the site at any time. 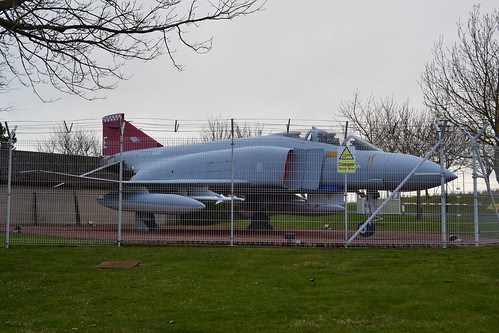 Whilst flying ceased some years ago, Boulmer’s aviation history has not been forgotten. The main gate at Boulmer continues today to be guarded by Phantom XV415 an FGR.2 which operated with eight RAF squadrons before its final retirement. Prior to this, Spitfire MKVb EP120 was in pride of place until 1967 when it was removed for use in the film ‘The Battle of Britain‘. Its replacement was another Spitfire F, Mk XVI TB252 which left in December 1969 for RAF Leuchars.

These Spitfires headed a succession of aircraft to guard Boulmer’s gate. In 1972 Lightning XP745 became guardian as  tribute to the close work carried out between the radar station and 11 Group’s fighters. The twenty-sixth MK.3 Lightning built, XP745 was formerly based at RAF Wattisham with 56 Sqn, it moved to Akrotiri and then back to Wattisham and 29 Sqn. The Lightning made its last flight on February 4th 1975 to Leconfield, where it remained for a number of years donating parts and being gradually stripped of its components. Eventually it was given to Boulmer and returned to guardian standard. The current gate guardian, a McDonnell Douglas Phantom FGR.2 XV415 ‘E’, like its predecessor, also stands at Boulmer in the colours of No. 56 Sqn formerly of RAF Wattisham.

Even though Boulmer is no longer a flying RAF base, it is heavily guarded and its operations kept secret behind high fences. The main airfield site has itself gone, the runways all removed (a small patch remained at the time of visit in 2018) and little of the wartime airfield remains in public view.  The road approaching Boulmer gives you a choice, turning right takes you to the Radar centre an area patrolled by dog handlers and armed guards, this gives some indication of the seriousness taken inside the perimeter fence. Taking the left fork brings you to the main gate of the former airfield and Air Sea Rescue centre, and the location of the Phantom gate guard mentioned above. Behind here are the various training facilities, again guarded from prying eyes and unwanted visitors.

Carrying on past here, in a small coppice on the left, is a small collection of wartime buildings, very much left to the elements they are still mainly intact and possibly the best reminders of any wartime activity here at Boulmer.

Continue on from here along the coast road. This takes you to the eastern end of the former airfield, and in parts, along the original perimeter track used during Boulmer’s flying life. A caravan park sits on what was part of the airfield here, the only location where the remnants of the runway can still be found. 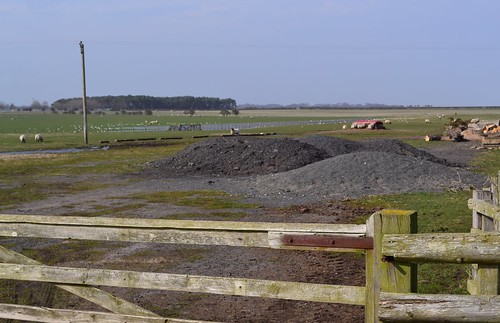 What’s left of Boulmer’s runways are barely distinguishable beneath the stones.

Further along this road and you come to a bend, this is the threshold to the two main runways with their location still visible as scars on the earth disappearing into the distance. Distant views also allow sighting of the current hangar and watch office, but there is little to be gained here. The road then continues round and whilst the perimeter track carries on into the field, the road leaves here and passes away from the airfield site. The perimeter track at this point is now a mere single track hardly distinguishable as an airfield perimeter track. 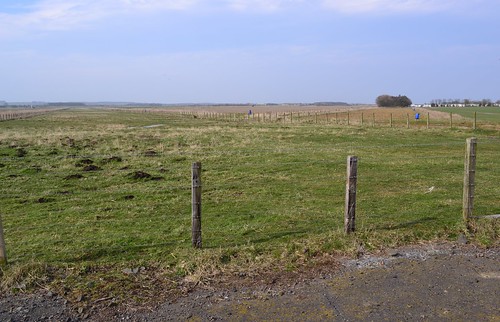 The scars of the two runways can still be seen in the fields of Boulmer.

Other than small buildings found in private gardens, little exists of this rather interesting site. Whilst its early wartime history is not earth shattering, it has however become one of the most important and key RAF sites in the UK today.

*1 For a detailed explanation of these radar systems and personal accounts of using them, visit Dick Barrett’s excellent website.

*2 MOD Memo dated 10 May 2016 in response to a freedom of information request.