In this part of Trail 47 we return to the Northumbrian coast, and like many airfields in this northern arena area, this is one that sits on the very coastline itself. Originally a decoy airfield opened in the mid war years, it was eventually converted to flying status only to close to flying in the latter part of 1945.  However, it has continued to operate under the control of the RAF, but in a much more secretive and less obvious manner.

This airfield spent most of its life as a decoy airfield to RAF Acklington, and it wasn’t until later in is wartime life, that it actually became an airfield used for flying.  Throughout the Cold War era it played a major part in Britain’s defence, a role it continues to play today, and whilst no flying units are based here, nor have they been for a good number of years, it is none the less one of Britain’s most important RAF sites and one that has a history unique to itself.

In this part of Trail 47 we visit the site that is the former RAF Boulmer.

RAF Boulmer sits on the very coast of Northumbria approximately 4 miles east of the historic town of Alnwick. Its life began in 1940 as a decoy airfield called Longhoughton with dummy Hurricanes and Spitfires protected by four Lewis Machine guns mounted on tripods. To add to the realistic effect, the dummy aircraft were moved about on a regular basis, the three grass runways were kept in good condition and a series of landing lights were left on to imitate an active airfield, The rouse was so good that the airfield was repeatedly attacked by Luftwaffe aircraft, but with little damage being sustained as result.

The airfield was manned by as few as twenty personnel, who maintained the deception well into the mid war years, until such time as the threat of invasion and raids had died down. No longer needed, the decoy site was closed and Boulmer would then enter a new phase in its long life.

In 1942 a decision was made to develop Boulmer into a hard-surfaced airfield, and although the tarmac and woodchip runways (1,800, 1,400 and 1,300 yds x 50 yds) weren’t added until November 1943, the airfield was opened and used ‘operationally’. Opened as a satellite airfield under the control of 12 Group, it would become a training station seeing a mix of Spitfires flown by 57 Operational Training Unit (OTU), (based as RAF Eshott) use its facilities. In addition to the hard runways were some twenty-five aircraft dispersal pans, a storage facility supplemented with four Dorman Long Blister hangars. These hangars were different to other types of Blister hangar by the fact that they were bolted to foundations and not held in place by their own weight. A larger more common T2 hangar was also planned, but this it would seem, never materialised.

57 OTU were originally reformed through the renumbering of No. 7 OTU on 1st November 1940 at Harwarden, before they transferred to RAF Eshott in Northumberland, two years later. They remained at Eshott for the duration of the war running 76 pilot training courses at both Eshott and Boulmer. The principal aircraft of the unit was the Spitfire, but they also used a variety of other small single engined aircraft including the Fairy Battle, the Lysander, Magister and Boulton Paul’s Defiant. 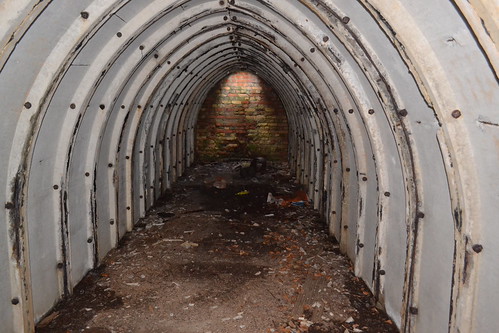 Inside one of the remaining wartime shelters at RAF Boulmer.

Boulmer would become quite a busy airfield over the next few years, not only used by 57 OTU, but also by other ‘local’ squadrons as a relief landing ground. Boulmer’s primary aim at this point was to train pilots to fly the Hurricane and Spitfire. Pilots would work through a series of exercises from basic flying training at Eshott, to more advanced flying techniques here at Boulmer. Like many of these training airfields Charter Hall, Millfield and Brunton, the aircraft they used were old and in many cases ex Battle of Britain examples. Patched up and repeatedly repaired, they were not the most reliable models to be given to trainees.

One of the first accidents to happen at Boulmer was the collision between Spitfire MK.IIa #P8071 and Spitfire MK.IIa #P7836 over the North Sea. The pilot of #P8071, Sgt. Leonard Baker (s/n:658739), was killed outright, whilst the other pilot managed to nurse his aircraft home, landing wheels-up at Boulmer – he being unhurt. At the time of his death, Sgt. Baker was only a young man at 22 years of age.

In November, that year, another Spitfire was lost also with its pilot, F/O. Geoffrey Booth (s/n: 119496), when his aircraft #P8197, also a MK.IIa, crashed shortly after taking off during a night training flight. F/O. Booth (RAFVR) was another youngster being only 23 years of age. He is buried in Chevington Cemetery in Northumberland, and was the Son of Harold and Elsie Booth, of Leeds, Yorkshire.

A number of other accidents occurred in which aircraft swung, engines failed or undercarriage jammed. The last 57 OTU accident at Boulmer involved a Spitfire VB #W3713 on March 2nd 1945, when just after take off, the aircraft struck a tree causing both the pitot head to break off and the throttle to jam open. An ex USAAF aircraft, it was one of 20 produced under contract B19713/39 and was written off as a result.

The latter part of the war (1943/44) continued to see units from other nearby airfields use Boulmer, 59 OTU who were based primarily at RAF Millfield, would use Boulmer whilst their satellite station RAF Brunton was under repair. Millfield was also set up to train pilots on the Hurricane, a training unit that would take the pilot from an ordinary single engined trainer onto the Hurricane before posting to an operational unit. Later on, this took on ground attack duties as the Typhoons were brought in, eventually being disbanded and reformed as the Fighter Leader School (FLS). All these training groups came under the jurisdiction of No. 9 Group, whose headquarters were at Barton Hall in Preston. These groups taught the pilots the art of night flying, dive bombing and ground attack tactics, all very important  techniques in the new developing war.

In the closing days of September 1944 the Fleet Air Arm Squadron 808 Sqn, placed their Seafire L MK.IIIs here whilst in transit from Harwarden to Eglington. A brief stay, it nonetheless brought  a new model of Spitfire from the famous mould to this remote part of Northumberland. 808 Sqn’s history had taken them through some of the most incredible wartime events including their participation in the Battle of Britain, to the sinking of their carrier, the Ark Royal. They also took part in the Normandy operations acting as spotters for naval guns, who were pounding the beaches and inland batteries along the French coast.

The winter of 1944/45 was very cold, with extensive frost, fog and ice hampering many RAF and USAAF bombing missions. Those aircraft that were flown during this time often found their home bases fog bound, and unable to land there, they had to divert elsewhere. In October, Halifax MK.III of 425 (Alouette) Sqn was diverted to Boulmer, only to find that on its later departure, the two starboard engines cut out causing the aircraft to swing violently. As a result, the aircraft piloted by F/O. W Corbett, struck a wood shed damaging the aircraft. Luckily on this occasion though, there were no casualties in the unfortunate accident.

This use of Boulmer as a safe haven was not unique. Indeed that same year on New Years Eve, no less than six US Eighth Air Force B-24s were diverted from their home bases to Boulmer. On New Years Eve 1944, a total of 956 B-17 Flying Fortresses, 371 B-24 Liberators and 785 escort fighters were dispatched to various targets in Germany (mission 772). German fighter cover that day was light, for unknown to the Allies, the Luftwaffe were preparing for their New Years Day massed attack on liberated airfields in the lowlands in Operation Boddenplatte.

The continent like the UK was largely fogged in, and considering the size of the formations and numbers of aircraft involved, casualties were relatively light. On return many of the aircraft found their home bases closed and so were diverted elsewhere. It was during this flight that six B-24s  ended up at Boulmer as a result of the bad weather.

Eventually the war came to a close, and no longer required, units began to leave or be disbanded, 57 OTU being no exception. Disbanded on June 6th 1945, a year after the invasion of occupied Europe, it would take its mix of Spitfires and leave Boulmer for good.

With the demise of 57 OTU, Boulmer was placed into care and maintenance. In part 2, we shall see how Boulmer developed over the next 70 years, how flying returned to this part of Northumberland and how Boulmer came to be one of the most strategic sites in Britain’s Air Defence Network.