After Part 1 of RNAS Crail, we continue looking at the buildings that remain, along with the units that served from here. We also look at the wide range of aircraft and the airfield’s current status.

Another exclusive building at Crail is the watch Office, again a building design unique to RNAS sites. The idea behind these offices was to create a standard floor design in a room of 38 ft x 30 ft, which could, depending upon the needs of the individual station in use, easily have a second, third or even fourth floor added should the airfield be expanded later on. Crail’s watch office has all four floors, the top being a largely glazed structure with commanding views not only across the airfield, but the Firth of Fourth and beyond to the Isle of May. Built into the ground level of the watch office is a fire tender shed, and rooms for the crews. Built to the basic drawing 3860/42, it remains one of only a few such examples today. 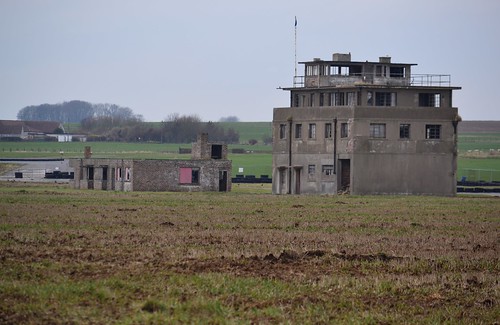 The Watch office remains rare and whilst in poor condition, a good example of Naval Air Station Watch Offices. The door on the bottom right is the fire tender door. The building to the left is the photographic block. Both these are listed buildings.

Crail was an extremely busy airfield, it would, at some point, house 29 different squadrons, only 8 of these were training (or non front line units as denoted by the preceding ‘7’), the remainder being temporary stays by front line units either on training or whilst their vessels were in dock.  As a training station it would pass a huge number of trainees, all having undertaken basic training through the Empire Air Training Scheme abroad. The task of training these crews fell to a small number of resident squadrons at Crail, the first being 785 Naval Air Squadron (NAS) who arrived on November 4th 1940, under the command of Station Commander Lieutenant-Commander P.G.O. Sydney-Turner RN.

No. 785 NAS were a training squadron, formed from the Naval element of the Torpedo Training Unit at Abbotsinch. They were a Torpedo Bomber Reconnaissance (TBR) Training Squadron, equipped from the beginning by two aircraft types, the Fairy Swordfish and the Blackburn Shark. The Sharks were the last in a line of Blackburn bi-planes and were an all metal framed aircraft covered with fabric.  They were powered by a radial engine and were manufactured both in the UK and under licence in Canada. Introduced in 1934, the Shark was considered out-of-date  by the time war broke out and was quickly replaced by both the Swordfish and later at Crail, by the Fairy Albacore in 1941.

No. 785 NAS was joined that same month by No. 786 NAS, another training squadron, also flying Albacores. As the more successful Swordfish became more widely available these too were also replaced.

In the summer of 1941 No.770 NAS arrived at Crail. 770 were a Fleet Requirements Unit tasked with supporting surface vessels in their training needs. Ideally they would tow targets for ship borne gunners to shoot at; provide simulated surface attacks and spot for shore bombardments. They would use a variety of aircraft to fulfil this role before moving off to Crail’s satellite station Dunino a few miles west of Crail. 770 NAS were also to be based at RAF Drem and there was talk of placing them at RAF Macmerry, a move that never materialised.

1943 brought yet another flying unit to Crail, No. 778 NAS – a Service Trials Unit. Their purpose was to test new aircraft suitable for deck landings, and to achieve this they used a range of aircraft including both the Barracuda and Supermarine’s Seafire, the naval version of the Spitfire. A Griffon powered aircraft, the early Seafires had good low altitude speed but take-off and landings proved difficult due to their poor handling characteristics. One flaw with the Seafire was the tendency to drift to the right due to the high torque developed by the Griffon. Eventually, Supermarine would fit a contra-rotating propeller, and the problem was solved.

The dawn of 1944 brought another collection of aircraft into Crail with a detachment of 758 NAS, a stay that was short-lived, lasting only three months almost to the day.

The last flying unit to arrive at Crail was the training Squadron No. 711 NAS in September that same year, also with Fairy Barracudas. At the war’s end, these were replaced with Grumman Avengers, the Torpedo bomber that proved such a success in the Pacific theatre. The Avenger was renamed the ‘Tarpon’ in British use, but this name never really caught on and Avenger stayed. This arrival brought the number of aircraft at Crail to around 240, however, the end of hostilities meant that training programmes were facing being cut down, and 711 NAS was disbanded being absorbed into No. 785 NAS in December 1945.

It was during these last two months of 1945 that another short stay unit would arrive at Crail, No. 747 NAS only staying between November and December that year.

A Grumman Avenger of No 785 Naval Air Squadron at Crail Fleet Air Arm Station The torpedoes carried in the belly of the aircraft. The Avenger (Tarpon) was a huge success in the Pacific war, particularly in the hands of the US Navy. © IWM (A 18237)

The last Fleet Air Arm squadron to use Crail was a detachment from 780 NAS which arrived here from Hinstock in the closing days of 1946. Staying here for only a very short period, they were to see the last of flying activities, and in 1947 flying at Crail finally ceased. The Royal Navy did retain the site though, renaming it HMS Bruce, they used the accommodation blocks to train new naval recruits and the airfield was maintained ‘operational’ allowing aircraft from other bases to use its runways for landing practice.

In 1949, the training part of Crail was closed, whether or not this was due to the harsh discipline found at Crail or not is unclear, but it was to signify the impending end of the Royal Navy’s relationship with Crail.

Other short reprieves came with the stationing of the Black Watch here during the Korean War, and a joint languages school (Joint Services School of Linguistics – JSSL) was set up here to train students in speaking Russian and Czechoslovakian.

The 1950s brought another short flying reprieve, as Leuchars’ runways were lengthened, the St. Andrews University Air Squadron who were based there, used Crail on a temporary basis.

The late 50s also saw the consideration of reopening Crail for jet aircraft, but due to the lack of runways space and with them being so close to the shoreline, lengthening them was out of the question. The idea was shelved and the Navy decided to close Crail for good. The land was eventually sold off, and returned to the state it is in today.

The airfield lies on the coast, 1/2 mile north-east of the coastal village it takes its name from, Crail. From the village take the road to Fife Ness and you arrive at the airfield within a few minutes. The main airfield is to your right and the accommodation areas to your left. The site is so large that it cannot be missed. The main entrance to the airfield is part way down this road, but a small road passes along the perimeter just after the site and leads all the way to the coast beyond. This road allows for excellent views across the entire airfield.

In the village itself, in the tourist information centre (limited opening hours), is a small display of photographs, letters and other personal effects from those who were stationed at Crail during the war. It is certainly worth a visit. 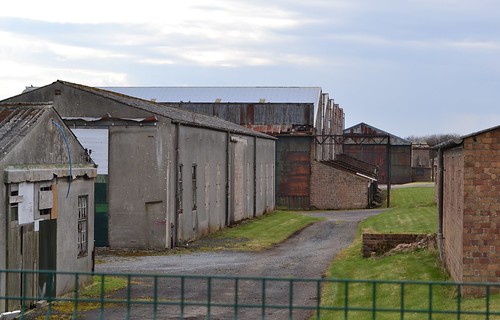 Many buildings remain at Crail, a unique site, it is one of the biggest ‘preserved’ Naval Air Station example in the country.

Crail exists today as a prime example of Royal Naval stations, its uniqueness qualifying many of the buildings for protected status. Classed as either category ‘A’, ‘B’ or ‘C’, Historic Scotland has recognised the importance of this site and laid the way to protect it as much as possible. The majority of the airfield was scheduled as an ancient monument in 1997, and following a review in 2006, this was reduced to an area covering the runways along with a selection of 32 buildings which are all now listed.

This said, many of the buildings are in poor condition, internal features being removed and damaged  extensively by constant exposure to the Scottish weather. Of those that are in a better condition, many are used for light industrial purposes or for the storage of farm machinery / produce. The Scottish Kart club operates on part of the site and it is used as a Drag strip and raceway offering Sprint packages to those wishing to race their car around its 1.25 mile track. Putting all this aside though, it is the ‘wholeness’ of Crail that is remarkable, and one that makes it such an important site to Britain’s aviation and wartime heritage.

The Aggleton Family website has log books, images and recollections of life at Crail and is certainly worth a visit.

Tony Drury’s website ‘Fleet Air Arm Bases’ has a wealth of information on Royal Navy stations across the country. Another site worthy of a visit.