In this, the last of the series looking at the development of Britain’s airfields, we look at the Watch Office, perhaps the most atmospheric of buildings associated with Britain’ wartime airfields. The hub of an airfield control, it was where aircraft were counted out and back, where the battle was monitored and the cries of those who fought in the air war were heard.

Though only a recent addition to airfield architecture, it developed quickly and became one of the technologically advanced offices in the world.

The Watch office, Watch Tower or in American terms Control Tower, was the centre piece of any airfield, the place in which all operations were controlled. Even today, the control tower is the one feature that stands high above the rest of the airfield with commanding views across the entire site.

Many of these watch offices remain today, some as fabulous museums, some as private dwellings, but many are sadly derelict or even worse – gone altogether. This that do survive create a haunting and evocative feeling when seen from inside. 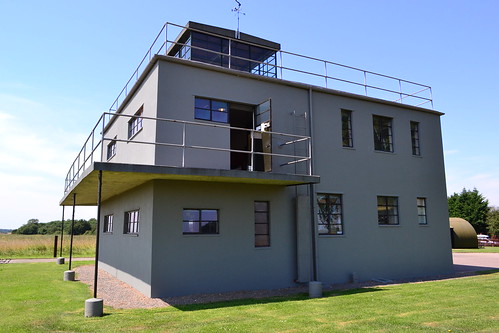 Unlike hangar development, the watch office appeared quite late in the development of the airfield, only really coming into being as war seemed inevitable. Before this, a rudimentary office was often all that was used, usually attached to the side of the main hangar, and was used to ‘book’ aircraft in and out. But by the mid war period the watch office had become a major structure on the airfield, a standard design (depending upon the airfield use) with two or more floors and often a ‘glass house’ for observation purposes.

For obvious reasons the watch office was built away from other buildings with clear sight over the entire airfield, an important aspect if controllers were to keep watch on the many aircraft that were moving about the airfield space. A vital asset to the airfield it was often targeted by marauding bombers, and in the case of attack, the controllers within would relocate to an emergency battle headquarters, hidden at ground level on a remote part of the airfield, but still with views across the site.

The basic watch office was often adapted rather than demolished and rebuilt, this can and does, cause great confusion as to its design origin. Further more, on some sites, the original was abandoned but not demolished, and a new office built elsewhere on a nearby site, thus giving rise to two offices on the one airfield eg. Matlask and Martlesham Heath

The Watch Office as we know it was first seen on military airfields in 1926 and resembled a small bungalow with bay windows. Those constructed on bomber bases would be slightly smaller than those on fighter bases, a fighter base office having a pilots office attached. The idea behind this was to keep pilots as close to the airfield  control centre so they could quickly be scrambled and report back to the airfield controller on their return. These early design were found on airfields such as Bircham Newton in Norfolk, Hendon and Tangmere and were all built to the same  basic 1926 drawing design only modified to take the extra pilots room.

The standard shape of the World War 2 Watch Office stems back to the mid 1930s, with the introduction of a two-storey building that was square in design. Like similar buildings of its time, it was brick, a building material that was replaced with concrete, in 1936. 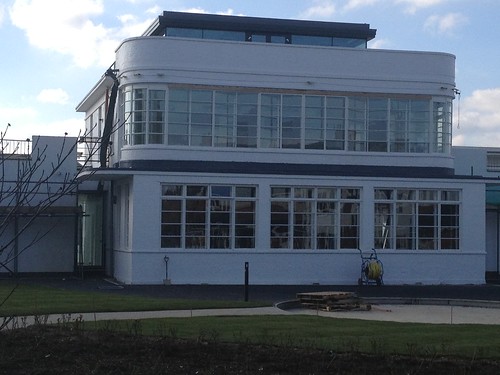 By the end of the expansion period, and with the introduction of hard runways, it was realised that the non-dispersed sites gave poor visibility for early watch offices, views across the airfields were not clear and so a quick remedy was called for. The answer lay in two choices, (a) demolish the current buildings  and rebuild it in a better location, or (b) add an extension. In many cases the former was the better idea and this progressed quite quickly, however, where the latter was chosen, remedial work required alteration of the building whilst it remained in use.

A further complication to these designs was the introduction of meteorological sections, which all new buildings erected at the beginning of the war now had. This gave a mix of design styles, enough though there was only a small selection of design drawings from which to work.

These late expansion period and early war designs introduced the idea of ‘viewing platforms’ or parapets, surrounded by safety railings along the front of the building. These deign also had very large glass fronted walls, bright and airy they allowed a lot of light to enter the building but gave cause for concern later on, when it was realised that a bomb blast would cause severed injury to the occupants in an attack. It was also found that during night operations, large windows were more difficult to black out and so smaller windows offered both better protection and greater ease of black out.

As building materials became scare, particularly wood and brick, concrete became the norm. This change also led to drawing changes even though the basic design inside and out, was the same.

Watch Offices give commanding views across the airfield. (Thorpe Abbots).

The regional control stations where these first offices were being built were certainly getting the better choice at this time, standard fighter and bomber airfields having to use inferior designs that very soon became outdated and inadequate for the needs of the airfield.

During the massive building programme of 1941/42, there was some effort made to standardise all airfield Watch Offices, this resulted in the 1941 design drawing no. 12779/41. This was to be the basic airfield watch office design, with its parapet, six large windows to the front and outside access steps. As older airfields were brought up to Class A Specification, many had these new Watch Offices built to replace the older original ones. Some simply had adaptation of the original. Here the use of the airfield had a bearing on the watch office modification / design, and whilst the basic 12779/41 model was employed, slight variations did exist where the airfield was not a bomber airfield.

Therefore various adaptations of this did follow, examples of which include the slightly smaller 13023/41 (RAF Cottam), those with modified smaller windows 15371/41 (Kimbolton) and 343/43 (Martlesham Heath),  and the smaller Night-Fighter design 15684/41 (Winfield). Being a Night-Fighter station Winfield, had the same basic design but construction methods were totally different. This new design 15684/41, would become standard at all night fighter bases.

All these alternative designs appear outwardly very similar to the original, but differ mainly in window design only, although the physical size of some is different. 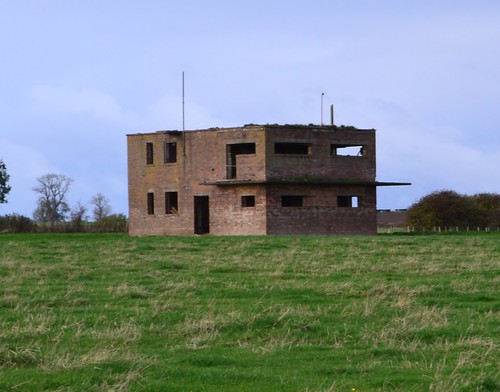 The Night-Fighter station Watch Office at Winfield (15684/41) is a similar design but smaller, having only four windows in the front.

This design, 343/43, eventually became the most common design for watch offices and appeared on all operational stations and Operation Training Unit airfields after 1943, using a set of six half-size windows across the front. 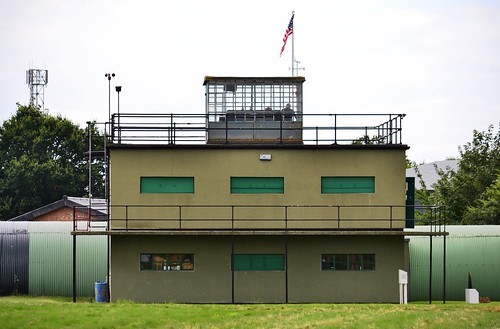 A further addition was the glass observation room located on the roof of the Watch Office. These were generally only applied to Group control offices, and gave an excellent all round unrestricted view of the entire airfield. Examples that exist today, such as Framlingham above, are replicas but have been built to very high standards. 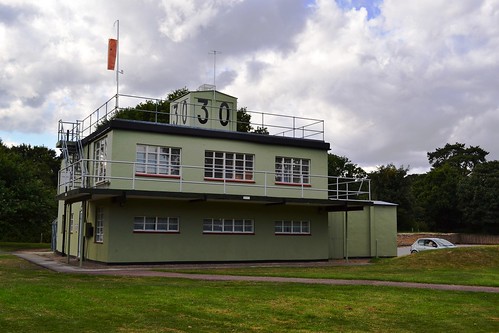 Martlesham Heath is a similar design to Framlingham (modified to 343/43) – Note the runway heading board on the roof.

At the end of the war some airfields such as Sculthorpe and West Raynham had their Watch Offices modified as they changed roles to Very Heavy Bomber Stations. This new design 294/45, improved on former buildings as a complete new design based on a steel frame with precast concrete floors. It had an extra floor added and then the octagonal ‘glass house’ or Visual Control Room with slanted glass to reduce glare. 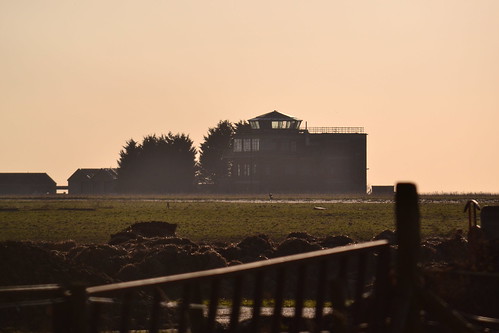 The Watch Office has been the hub of airfield command and control since the mid 1930s, it has developed from the humble shed to a multi-functional technologically advanced building dominating the skyline of the airfield today. Sadly though, many are now gone, and of those that are left only a few remain in good condition or open to the public.

The war-time airfield incorporated numerous building designs and shapes, certainly far too many to cover here, the wide variety of technical buildings, synthetic trainers, parachute stores, headquarters and general stores, all changing as the war progressed.  The design and materials used in these structures was as varied as the designs themselves. But as the RAF grew so too did the airfields they used. The runways, the hangars, the technical buildings and accommodation sites have all grown alongside. Sadly many of these buildings have now vanished, but the process and speed at which they developed has been unprecedented. From humble grass strips with wooden shacks to enormous conurbations with numerous buildings, they have become iconic symbols representing decades of both aviation history and human sacrifice.

The entire page can be viewed separately:

or as a whole document.

8 thoughts on “The Development of Britain’s Airfields (Part 8).”