In Part 4 of the Development of Britain’s Airfields, we take a short look at the construction process and the numerous companies that were involved in building the airfield. Once a site was found in Part 3, compulsory purchase was made and the developers moved in.

The creation of airfields was set, each plan was studied, trees, shrubs and hedges were removed, ditches filled and the land leveled to a maximum gradient of 1:60.

First of all to reduce the risk of machinery being bogged down, perimeter tracks were built. This allowed the delivery of heavy loads to any part of the site, and so were originally designed to carry support vehicles rather than aircraft. One reason why so many grassed airfields had hard perimeter tracks.

With such a big workforce being drafted in, accommodation for the workers would be needed, these would generally be the huts that would be used for the aircrews and other personnel on the base once active. Drainage and dry storage was needed as a matter of urgency, and were usually a priority even before the accommodation areas. 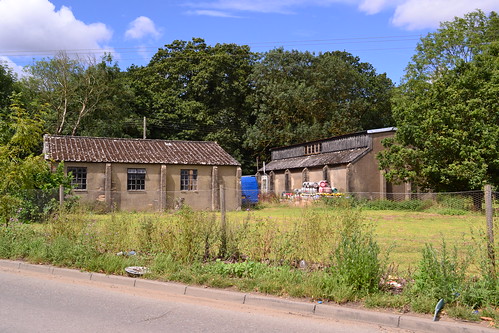 Buildings would be built using a range of materials.

Hiding these enormous excavations was going to a headache for the authorities. How do you hide a building site covering many acres? (Average grassed stations covered 200 – 400 acres whilst those with runways were around 500 acres extending to over 1,000 by the war’s end).  Numerous strategies were tried from painting the ground to covering it with coal dust, even adding wood chip to the concrete surfaces was used all with little real impact. Any spy or reconnaissance pilot worth his salt would have spotted the works and reported back immediately.

Gradually the airfield developed. Workers worked in shifts covering a 24 hour working day, seven days a week, this meant that the construction period was relatively short and the completion rapid. By the end of the war some £200 million worth of work had been carried out involving somewhere in the region of 130,000 individuals including engineering workers, and building sub-contractors.

As the site neared completion, RAF staff would begin moving in. The stores officer or ‘Equipment manager’ would often be first, ordering the necessary supplies to accommodate the forthcoming personnel. He would usually be followed by a NAFFI and a medical officer who would officially declare the site ready for occupation. Once this had been given the ground crews would be brought in, followed by aircrews and the aircraft. Even with a newly opened site, it was rare that it was ever fully finished, often accommodation was rudimentary or cooking facilities limited. In some cases tents were the order of the day until construction was completed. Great emphasis was placed on getting the site open and operational rather than ready. In some cases ground crews, who were otherwise waiting for aircraft to arrive, would take to shovels and picks to complete or improve upon work that had been started on site.

Also the airfield needed naming. Names were usually taken from the nearest village or town, and where confusion might arise from a similar name, it could then be taken from an alternative nearby village. This is why some airfields appear to be quite distant from their respective named locations. Alternatives to this would be geographical features or alternatively local farms e.g RAF Twinwood Farm. The Americans used the system of numbering partly because (a) the American airmen were unable to pronounce accurately some of the English names and were often found getting confused by them, and (b) the American administration system made it easier to use numbers rather than names.

By now the airfield was built, or at least open, the first unit would arrive and airfield defences would be set up. Military personnel would become established and operations would soon begin. All this could occur within months, it was a massive undertaking achieved in very little time.

In the next section we look at the architecture of British airfields, how the idea of replication in design led to architectural developments, and how the demand for materials led to changes in airfield buildings.