In Part 3 of this series, we turn from the political scene of Part 2 and look at how airfields were identified, The process and methodology of airfield selection.

Choosing an airfield site during these prewar periods was especially difficult as there were many ‘unknown’ factors to predict, a factor in itself that helped determine the needs of each of the various schemes mentioned previously. However, there were a number of airfields already in situ, some used by the military and some used by civilian aviation. As remnants of the First World War, many military sites were inadequate or inappropriate for the growing future needs of the RAF, but with some work, they could be developed into workable sites as the basic infrastructure was already there in place.

As well as these RAF sites, there were also civilian airfields, which the Government considered as potential military airfields. Because civil aviation had grown amongst the wealthier members of society, although not exclusively, this meant that in the pre-war period, there were some 90 airfields*4 owned either by local councils or under private ownership. Many of these were requisitioned by the authorities, but because many were small or located very close to built-up areas, (in 1928 the Air Ministry ‘encouraged’ towns of 20,000+ inhabitants to have a municipal airport), they were not suitable for modern fighter or bomber aircraft. As a result, many of these became training or maintenance sites, some linked to aircraft production facilities, but none were ‘operational’ for fighting units.

A further group of airfields in use at this time, were those of the AA (Automobile Association – better known as a motoring organisation). The AA Landing Grounds were often ex First World War sites located near to hotels and other places of interest to the motorist. Fuel was usually supplied at, or near to, each site, and each one was ‘tested’ by an aircraft on behalf of the AA before it was granted AA status. As these sites were registered, their locations were readily available to the Germans and so they were closed and rendered unsuitable for aircraft. However, land in close proximity was occasionally used, and so a new site would be created in a similar location.

With all these sites available, one would imagine choosing a site and developing it, would be relatively straight forward, but this is far from the truth. Many of these sites were inadequate, and the process of repairing/upgrading or rectifying it was simply not going to be sufficient. Therefore, many new sites were going to be required and the process by which a site was identified, acquired and then subsequently developed was not at all straightforward. In each case the Air Ministry Directorate (AMDGW) and Air Ministries Aerodromes Board would work in very close conjunction with numerous other Government departments and interested public bodies. These would include local Electricity Boards, Drainage Boards, the Geological Survey Department and the local War Agricultural Committee, who were concerned about flooding caused by run-off from the sudden building of large expanses of concrete.

In the first instance, using an ordnance survey map, areas that were below 50 feet above sea level or above 650 feet were generally ignored, the former being prone to flooding whilst the latter suffering high levels of low cloud or hill fog. Next a circle with a radius of 1,100 yards was marked off, this had to be flat with minimal rise in the ground layer. It also had to be free from obstructions and ideally at least three miles away from any other flying location. Next officers from the Air Ministries Aerodromes Board would walk the site, field by field, recording maximum landing distances, and noting any unidentified obstacles, trees, hedges, ditches or more permanent structures that would need removal.

By September 1939, board officials had identified, examined and recorded around 4,000 possible sites in the U.K. Many would be simply filed away never to see aviation of any kind, whilst others would become famous for years to come.

Once a suitable site had been identified and examined, the local geology had to be established where possible. In the pre-war years, no consideration was given to hard runways, they didn’t exist in any real form and were not seen as needed as any aircraft of that time could happily take off from a grass strip. However, in order to prevent aircraft wheels from bogging down, or flooding closing an airfield, well-drained soils were absolutely paramount.

Once the site had been accepted, the land was requisitioned, forcibly purchased using new powers created under the Emergency Powers (Defence) Act 1939. This gave virtually immediate access and ownership of the land – with little notice to the land owner – to the Government. These powers also saw their way to reducing the ‘NIMBY*5 effect, protests against developments being side-lined through political clout.

The next stage in the process was to put the job out to tender. The difficulty here was that secrecy was of the utmost importance, and so little of the detail was released other than an approximate location. As the war progressed, the number of construction companies involved became fewer, and those that were involved more established, prime contractors being Wimpey, Laing, Taylor-Woodrow and McAlpine – all of whom went on to be major construction companies post war. That said, no major airfield would generally be completed by one single contractor, as the whole process required a wide range of skills based operations. As one completed their task, another would come in, sometimes dual operations would be carried out simultaneously. For example taxiways and access roads may have been built by Tarmac, whereas the runway may have been built by McAlpine. Accommodation areas often used ‘Nissen’, or in many USAAF cases, ‘Quonset’ huts, many of these and other ‘standard’ buildings were erected by buildings contractors whereas other more substantial buildings may have been built by John Laing and Co.

By the outbreak of war, 100 sites had been purchased, as the number was relatively small, the board were able to be ‘particular’ in their choice, something that was quickly disregarded as the war progressed.

Airfields are highly labour intensive projects requiring an enormous workforce and extensive heavy machinery, little of which were available in the early 1940s. Irish labour provided the backbone of the initial workforce, whilst heavy plant came in from the United States. At its peak there were some 60,000 men employed on airfield construction, all of whom were unable to spend their time rebuilding the devastated towns and cities of the UK.

As the war progressed, the Royal Air Force Airfield Construction Service began taking a greater role in airfield construction, diversifying away from their original role as repairers of damaged airfields sites. There would be an initial 20 squadrons created to carry out these tasks, with a further 6 being formed later in the war. With squadron numbers ranging from 5001 to 5026, they would be initially involved in the updating of older sites and the creation of ALGs, eventually taking on a much greater responsibility of airfield construction. These squadrons, were of course given great assistance by the well established Royal Engineers.

In 1942, the United States joined the European theatre sending their own Engineer Aviation Battalions to the U.K. Their task was to support these British squadrons by building their own airfields ready for the huge influx of men and machines that was about to arrive. The first site completed by the Americans and opened in 1943, was Great Saling (later renamed Andrews Field) by the 819th engineer Aviation Battalion. Not being experienced in U.K. soils, it was a steep learning curve fraught with a number of initial problems. 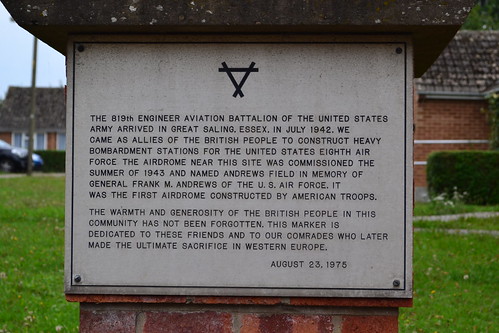 In 1939 there were only 60 military airfields in the UK, by 1940 this had increased to 280, almost tripling to over 720 by 1945. Between 1939 and 1945 444 airfields*2,4 new airfields were built by these organisations – an amazing feat by any standard. Using almost a third of Britain’s total construction labour force, they were often open and manned within a matter of months rather than years. Building Britain’s wartime airfields was not cheap. Many, like Debach the last USAAF airfield to be constructed, cost almost £1,000,000 to construct.  A small amount compared to the £645, 000,000 it cost to build all 250 US airfields in the UK*5a

This whole process however was not fool-proof. In a number of situations sites were identified and requisitioned, but not developed. In several cases they were partly built, and in others like RAF Cottam, they were completely built but then never occupied. Some airfields were identified for USAAF use, only to be declined and then handed over to their RAF counterparts. Some US bases were never actually started but remained named and therefore official sites even though they remained as farmers fields!

The lead up to war led to a massive change in the British landscape. Keeping airfields secret led to many being built in remote areas and away from major towns. Little did the inhabitants of these quiet little villages know, but their population was about to increase, in some cases by thousands.

In the next section we look at how the airfield was built, the process of construction and the difficulties faced during this phase.

*5 NIMBY – Acronym used to describe the objections of local planning projects. (Not In My Back Yard).