It is a very detailed and complex subject, and one in which there have been many valuable and in-depth texts written. It is a subject that is far too detailed to cover in its entirety here, but by focusing on the main features of airfield development, we can at least shed some light on the huge undertaking that reshaped the British landscape, and whose effect has been long-lasting, becoming the widespread topic of interest it is today.

In the following series of eight posts, we look at the development of these airfields, the main structures that are associated with them and how Britain’s airfields grew from basic fields to major conurbations as a result of the direct threat of war.

We start with the build up to war and the growth of the Royal Air Force from 1918.

The Royal Air Force was formed on April 1st 1918 through an act of Parliament that saw its predecessor, the Royal Flying Corp, mutate into what has become not only one of the premier fighting forces of the world, but also the oldest Air Force in the World. However, in the post-war era following the First World War, political opinion was very much against the continuation of the RAF, feeling that it was exhausting an already depleted national economy and contravening a stern non-rearmament policy. In addition, an apathetic and vehemently pacifist post war public was also hard to convince that a third force, which was seen as ‘weaker’ than its two older sisters, was really necessary.

Two men, Winston Churchill (then Minister for War) and Air Marshal Trenchard (as Chief of the Air Staff), crusaded on behalf of the RAF, seeing it as the valuable asset it had become. In the Trenchard memorandum of December 1919, Trenchard outlined the biggest re-organisation of the Royal Air Force in history, a change that included everything from insignia and uniforms, to buildings and training. It was a change that would establish the RAF as an air force capable of mobilisation and expansion at a moments notice.

To achieve these goals, Trenchard would set up a rigorous training plan, with stations specifically designed to deal with the various aspects that would be needed; an Air Force Cadet College at Cranwell, a flying training school for Air Force Staff in Andover, a further scheme for short-service commissions and a technical college at Halton (set to close in 2022) in Buckinghamshire. 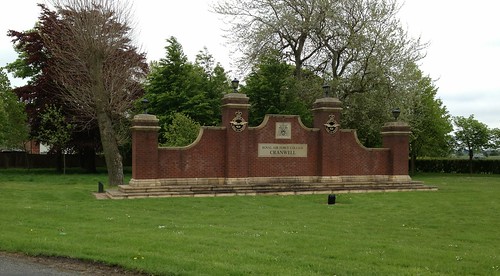 This re-organisation would be a re-organisation for survival, and would involve the disbandment and demobilising of vast numbers of men and women; the subsequent rundown of the RAF being both rapid and immediate. By March 1920, in excess of 23,000 officers, 21,000 cadets and 227,000 other ranks and been demobilised and returned to ‘civvy street’. The new RAF was small, formed with just 3,280 officers and 25,000 other ranks. Assets too were stripped, airfields were sold off and hardware disposed of, but the Air Force was going to survive as an independent fighting force that would become a major peacekeeping force within the next few decades.

In the 1920s, and even though limited by the 10 Year Rule on defence expenditure, Trenchard envisaged a build up of the Air Force, incorporating both fighters and bombers, to a level that would be both powerful and dominant. He set a target of some 52 Home Defence Squadrons, but his continued battles with the Army, Royal Navy and politicians alike, meant that this figure would take many years to achieve and Britain would be poorly protected in the case of attack.

In a statement by the Secretary of State for Air, Sir Samual Hoare, at a meeting of the Imperial Conference on October 19th, 1923, Sir Samual highlighted the inadequate numbers that were present for Home Defence, he said:

“When the Navy and Army requirements were met and the squadrons provided for the Air Command in Iraq, and provision made for training in Great Britain, the machines left for home defence in Great Britain were altogether insignificant. I may give as an instance of this insignificance the fact that a few months ago at the height of the Turkish crisis, when we had sent two Royal Air Force squadrons to Constantinople, we were left with only twenty-four first-line machines actually available for home defence against air attack.”

Whilst slow, the 1920s and early 1930s did see the RAF expand, achieving 65 squadrons by January 1st 1935, mostly manned by fully trained reserves. This did however, do little to bolster the front line numbers of available fighters, and as demands for spending cuts in the world’s depression started to bite, this build up began to slow even further.

It was during these early 1930s that movements in Germany, in particular with Hitler and the rise of the Nazi Party, gave rise to an uneasy feeling across Europe; a feeling that would lead to new policies being implemented, policies that would refuel the impetus of Britain re-arming its major forces in the latter half of the 1930s.

With events like the Schneider Trophy and displays at Hendon capturing the imagination of the public, the Government saw these as a way to develop new faster and more agile aircraft, and as a pedestal on which to put both Britain and the RAF. These air displays continued until 1937, when a war with Germany became evermore likely, and the previously formed rearming policies began to take shape.

German boasting of its redevelopment was barely enough to hide the fact that it was rearming as early as 1932, and the speed at which this was happening would far outstrip the RAF’s meagre numbers in the years following the Nazi’s rise to power in 1933. In these early years, Britain’s bomber strength was as low as five night, and six-day bomber squadrons, each one operating limited, slow and cumbersome biplanes. Aircraft that were no match for even the reduced force that Germany was to front during the controversial Spanish Civil War.

Germany’s rearming was occurring at an alarming rate, and after Goring’s inauguration as head of the Reich Commission for Aviation, a formal request for the purchase of British aircraft, by Goring, was refused, but ironically not the supply of two military supercharged aero-engines that were to be built under license in Germany! Britain was not alone in this action though, the USA also sold Germany contravening merchandise during the 1930s, 19 aircraft and 569 aero-engines crossed the Atlantic, with most of these being supplied during 1934.*1 Perhaps even more astonishingly, the World War 1 German Ace Ernst Udet visited the US in the 1930s, where he developed not only ground attack and dive bombing techniques, but purchased two Curtiss Hawk II biplanes, which were taken back to Germany for evaluation for future dive bomber designs. This action eventually led to the Germans developing the Junkers Ju-87, famously known as the ‘Stuka‘, an aircraft that wreaked fear and havoc across the European continent.

Although the depression of the 1930s held German production back, the number of air-frame plants rose from 2,813 in January 1933 to almost 38,000 in 1935. This rearming was becoming so rapid, that in 1933, six new aircraft manufacturers joined the seven already established – all diversifying from other engineering areas to begin aircraft manufacture. By 1935, the total number of air-frame and aero-engine plants had risen to an astonishing 53,865, an increase of nearly 50,000 in just two years.

This massive increase was highlighted in a letter from Winston Churchill to Stanley Baldwin (three times British Prime Minister) on March 17th 1935*8, in which Churchill pointed out that:

“I believe that the Germans are already as strong as we are and possibly stronger, and that if we carry out our new programme as prescribed Germany will be 50 per cent stronger than we by the end of 1935 or the beginning of 1936.”

This increase eventually led to a number of changes in Britain. One such change was the demand for a twin-engined aircraft capable of delivering a 1,000lb bomb up to 720 miles away. Whilst not record-breaking, specification B.9/32 led to both the Wellington and the Hudson being developed, each a major step forward from the biplanes in RAF service at that time.

A further major change that the German action brought about, occurred during the mid – late years of the 1930s (1934-1939) where Britain saw, what is now commonly referred to as, “the Expansion Period”, a period in which the RAF began to increase its numbers also. It was during this period (between May and July 1936) that the idea of Trenchard’s small elite force would become four; the Air Defence of Great Britain (ADGB) along with No.1 Air Defence Group and other administration and command groups, would be disbanded and reformed as four new commands: Fighter Command (HQ at Stanmore), Bomber Command (HQ at Uxbridge), Coastal Command (HQ at Lee-on-Solent) and Training Command (HQ at Ternhill). In addition, new aircraft were going to be required, particularly fighters and heavy bombers, and to support these new aircraft, a massive support network:  new training facilities; aircraft and aero-engine factories; storage facilities; armaments factories; flying schools, and of course a range of new airfields would be needed. Running in conjunction with this would be research and development. The RAF’s budget, which included research and procurement, rose from £17.5m in 1934-5 to £74.5m by 1938-39, a massive injection of cash to help develop these new ideas.

This demand would begin the process by which Britain would develop its airfields and air force, kick starting the huge economic and technological change that would see Britain move from the simple bi-plane to jet technology, and airfields that covered not just a few, but several thousands of acres of land across the British landscape.

Britain had entered the arms race with Germany, and it would be a race to the death.

In the second part we examine the political response focusing on the expansion period 1934-1939, and how Britain’s airfields changed as a direct result.