On the afternoon of January 1st 1945, Mosquito FB.VI #PZ340, ‘HB-Z’ took off from RAF West Raynham, according to the Operational Record Book it was assigned to a “high level bomber support” sortie over Heligoland, unusual as these Mosquitoes were not pressurised models. The pilot, F/O Ian George Walker (s/n: 156104) and navigator/wireless operator F/O. Joseph Ridley Watkins (s/n: 152875), had only just been brought together, F/O Watkins, from Wanstead in Essex, normally being based with 141 Squadron, but on attachment to 239 Squadron, when the flight took place.

On return, from the mission, the aircraft crashed near to Narford Hall, an Eighteenth Century stately home located a short distance to the north-east of RAF Marham in Norfolk. Whilst not confirmed, it is thought the crash was caused by an instrument failure, a crash that resulted in both airmen being killed.

Following the accident, F/O. Walker was returned to his home town and was buried in St. Michael’s Cemetery in Dumfries. F/O Watkins however, was buried locally, in nearby St. Andrew’s Church, Little Massingham not far from RAF Great Massingham. Both airmen were only 21 years of age. 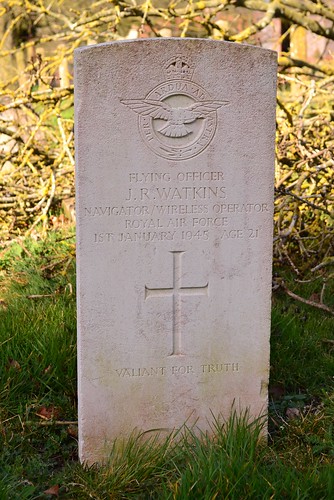 F/O Watkins died on January 1st 1945 after the Mosquito he was in crashed near to RAF Marham, Norfolk. He rests in St. Andrew’s Church yard, Little Massingham.