In the second part of RAF Stradishall, we carry on from part 1, looking at the terrible circumstances around 214 Squadron’s worst night. The developments of Stradishall in the later war years and the post war development with the arrival of the Cold War and the jet age.

The raid would be to Hanau railways yards located 25 km east of Frankfurt am Main. During the raid thirty-five Wellingtons and fourteen Hampdens from  both 57 Squadron (RAF Feltwell) and 214 Sqn (RAF Stradishall) would be dispatched. Take off was between 20:00 and 21:00 hrs and the attack by 214 Sqn would be carried out at heights as low as 400 feet using a mix of 250 lb and 500 lb bombs with impact fuses and some 3 hour delay fuses. During the attack, railway lines, bridges and carriages were hit, explosions were seen and the gunners strafed stationary trains and gun positions. The bomb aiming and shooting was reported as ‘good’.*3

However, of the fourteen 214 Sqn Wellingtons that left, seven were lost and a further Wellington was hit in both engines by light flak the pilot nursing it back to England. Of those seven lost, one airman, Sgt. C. Davidson was taken prisoner of war, four have no known grave and the remaining thirty-seven all died, and remain buried in graves across Belgium and Germany. Truly a terrible night for 214 Sqn. 57 Squadron fared little better, losing five aircraft with the deaths of twenty-five airmen, the remaining five being taken prisoner.

Further losses that month were restricted to just odd aircraft with the last loss being recorded on the night of 28th/29th April, with all crewmen being lost. Before the month would be out, 214 would begin the conversion to Stirlings, a new start and a new challenge.

The Stirling would prove to be a robust but under performing aircraft, its short wingspan and subsequent lack of lift, proving to be its biggest downfall. 214 Sqn would, during the conversion programme, write off nine aircraft, much of this though being as a result of operational activity, some however, due to pilot error or accidents. The first incident occurring on May 5th, 1942, approximately one week into the programme, when Stirling N6092 piloted by F/O. Gasper and Sgt. M Savage, swung on take off resulting in its undercarriage collapsing.

In the October 1942, 214 Sqn would leave for the final time, moving off to Stradishall’s satellite airfield, RAF Chedburgh, where they remained until December 1943. Following this they transferred to RAF Downham Market. The last loss of a 214 aircraft at Stradishall being on the night of September 19th/20th with the loss of Stirling ‘BU-U’ R9356 along with four of the seven crew, the remaining three being taken prisoners. By the end of 1942, 214 Sqn would have lost thirty-three Stirlings, twice that of the Wellington, all-in-all a huge loss of life. 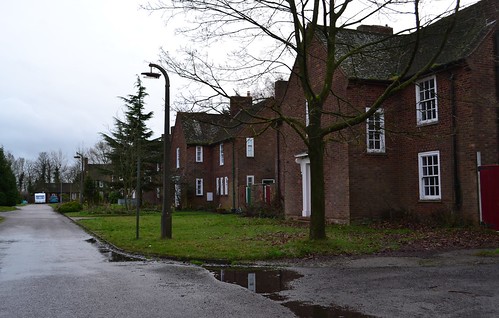 Former Married quarters are now private dwellings, but still retain that feel they had when they were first built.

The December of 1944 not only saw the departure, for the last time, of the Stirling as a heavy bomber, but it heralded the arrival of the Lancaster, the remarkable four-engined bomber that became the backbone of Bomber Command. In total 7,377 of the bombers were produced, including 430 that were constructed in Canada. A remarkable aircraft born out of the much under-powered and disliked Avro Manchester, it went on to fly over 156,000 sorties, dropping over 50 million incendiary bombs and over 608,000 tons of HE bombs.

186 Sqn would be the first unit here with the Lancaster both the MK.I and the MK.III, operating them in a number of missions over occupied Europe.

One of the saddest ends to the war and the operations of 186 Squadron was on the night of April 134th/14th. Whilst returning from bombing the U-boat yards at Kiel, two Lancasters: P8483  ‘X’ and P8488 ‘J’ collided at 02:26. Five of the crew from AP-X were killed, either instantly or as a result of injuries sustained, whilst all seven of AP-J lost their lives. This loss would account for a high proportion of the squadron’s losses, 186 Sqn only losing nine Lancasters in the six months of residency – a considerable change to the carnage suffered at Stradishall earlier on in the war. 186 Sqn would finally be disbanded here in July 1945.

Over the next four years, there would be a return of both the Stirling and the Lancaster, but this time in the transport role, as Stradishall was passed over to Transport Command. No. 51 Sqn, and No. 158 Sqn both flying Stirlings (158 Sqn being disbanded at Stradishall) 35 Sqn, 115 Sqn, 149 Sqn and 207 Sqn all operating various models of the Lancaster until February 1949.

There would then be a lull in operations at Stradishall between April and July 1949 whilst the airfield was put into care and maintenance. Following this 203 Advanced Flying School (AFS) moved in with a range of aircraft types, including the Meteor and the Vampire. Also thrown into the mix were a number of piston engined aircraft, notably the Spitfire XIV, XVI and XVIII, along with Tempests, Beaufighters and Mosquito T3s. Other training aircraft also came along covering everything from the Tiger Moth to the modern jet fighter. A new age was dawning.

On the night of August 31st and September 1st 1949, 203 AFS and 226 Operational Conversion Unit (OCU) at Driffield, would both disband and reopen under each other’s titles, the new 226 OCU now operating as the training unit converting pilots to jet aircraft. 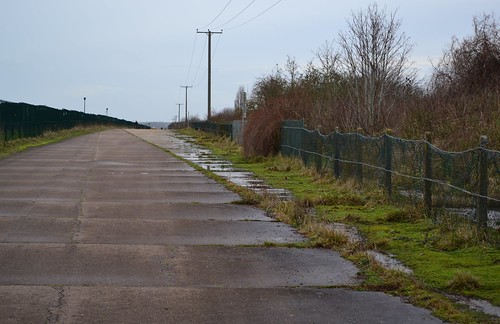 To the left was the main airfield now covered by a solar farm, to the right would have been the hangars, the original apron concrete still visible.

First along were the night fighter variants of the Meteor (NF.11) and Venom (NF.3) between March 1955 and March 1957, a residency for a reformed 125 Squadron that coincided with 245 Squadron only 3 months behind them. No. 245 swapping the Meteor for the Hunter before being disbanded in June that year.

No. 89 Squadron (another unit reformed in December 1955) saw the arrival of the new delta wing Javelins FAW6 & FAW2 working alongside the ageing Venom Night Fighters. They flew these aircraft for thirteen months before being disbanded once more, and then renamed as 85 Squadron whilst here at Stradishall. After this re-branding they continued to fly the Javelins. In 1959 they too departed Stradishall for RAF West Malling and then onto RAF West Raynham, where they too disbanded once more.

In July 1958, No. 1 Squadron were yet another unit to reform here, carrying on from where 263 Sqn left off. After replacing the F.6s of 263 Sqn with FGA.9s in the fighter / strike role, they finally departed to Waterbeach, eventually becoming a front line Harrier unit at Cottesmore.

Gradually operations at Stradishall were beginning to wind down. In June 1959 No. 54 Squadron also replaced the Hunter F.6s with FGA.9s before they too departed for Waterbeach in Cambridgeshire. 54 Sqn went on to fly both the Phantom and the Jaguar as front line operational units, all iconic aircraft of the Cold War. A very short spell by three Hunter squadrons led to the eventual closure of Stradishall in 1960 as a front line fighter station; 208, 111 and 43 Sqns all playing a minor part in the final operations at this famous airfield. The last flying unit No.1 Air Navigation School (ANS) finally closing the station doors as they too disbanded on August 26th 1970, being absorbed by No. 6 Flying Training School. 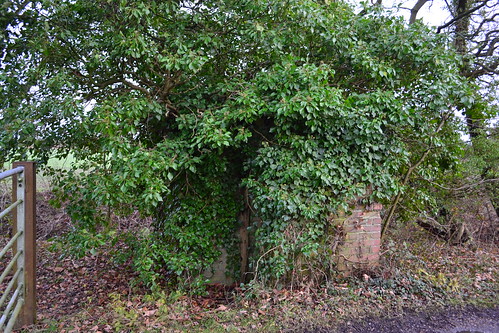 Some older buildings can still be found outside the grounds of the Prison.

A considerable number of non-operational units would also operate from Stradishall throughout its operational life such as 21 Blind Approach Training Flight,  meaning just short of 50 flying units would use the facilities at Stradishall, all helping to train and prepare aircrews for the RAF and the defence of Britain.

Stradishall is located a few miles south-west of Chedburgh, the main A143 dissects the two prison blocks, the north side being the former accommodation area, with the south block being the technical area and main airfield site. Access to the site is therefore limited, however, the former officers mess and associated buildings are available to view, as are a number of former technical buildings. A large memorial is currently displayed outside the officer’s mess building, named Stirling House  in memory of the aircraft type that flew from here, and it is open to the public. The foyer of the building, now a Prison Officer Training facility, is opened, and holds a roll of Honour, for those lost at the airfield. 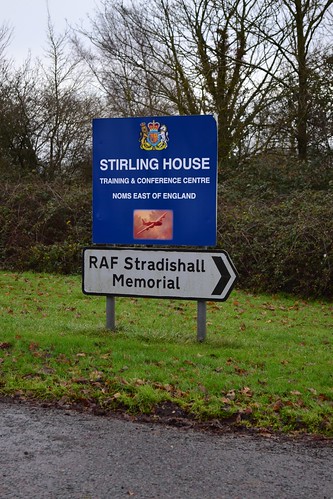 The current Prison Officers Training facility is named after the ill-fated Stirling that flew from RAF Stradishall. The Memorial being well sign posted.

Through the high security fencing, and around the site a number of buildings can still be seen, the familiar layout and design being standard of wartime and post war airfields. By turning off the A143 prior to reaching the memorial site, a small back access road allows public access to the airfield site. This is now, in part, a conservation area where the runways have all been removed, parts of the perimeter track do still remain and public access is permitted. The runways have been replaced by a solar farm, large panels cover the entire area and all are encased in high security fencing with closed circuit TV preventing you from wandering too close to the high-tech plant.

Walking along the northern side of the airfield, views can be seen of the accommodation area, again a number of former buildings can be seen through the fencing, their style typical of the expansion period design. 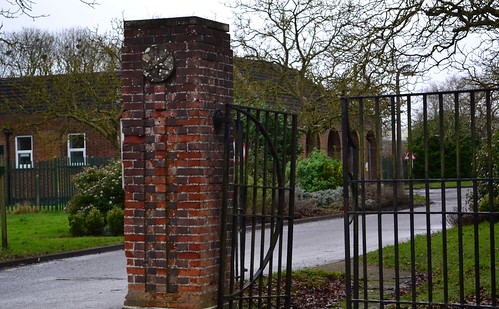 The dilapidated gateway hides many original buildings and a layout that reflects airfield design of the expansion period.

Back on the main road, turning left passing the prison, a turn off gives access to the aforementioned officers mess and memorial, it is well signposted, and continuing on, brings you to the former married quarters, now private housing, again typical of airfield design. Across the road from here, a farm track still has a small number of buildings now in a very poor state, this would have been an entrance to the accommodation area behind the current north side Prison.  They are both quite well hidden by undergrowth but they are visible with a little effort.

Stradishall, like many of the early expansion period airfields, with its neo-Georgian style architecture and well designed layout, lasted well into the cold war period. These early examples which set the standard for future designs, proved to be long-lasting and robust, unlike many of their later counterparts hastily built with temporary accommodation. Whilst a rather unfitting end to a long and distinguished life, the transformation into a prison has in part, been its saviour, and one that has preserved many of its fine buildings for the foreseeable future at least.

*1 419 (Special Duties) Flight were initially formed at North Weald on 21st August 1940, being  disbanded and re designated 1419 (Special Duties ) Flight on 1st March 1941 at Stradishall. They in turn were disbanded on 25th August 1941 to be reformed at Newmarket as 138 Sqn. they moved back to Stradishall on 16th December 1941. In February 1942, the nucleus of 138 Sqn formed 161 Sqn at Newmarket continuing the role of SOE operations from there.